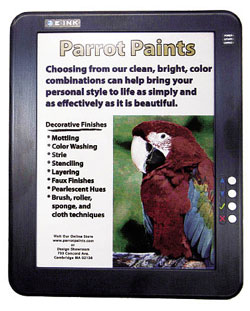 Technology is setting its sights on replacing a medium that has been firmly entrenched since the Gutenberg Bible appeared in the 15th century: printed paper.

As substitutes to printed paper, e-readers such as Amazon’s Kindle and Sony’s Reader are starting to catch on. But so far, they come only in black and white. To real­ly take on the paper market, observers say, developers of the technology must overcome the technical hurdles to color displays.

About 1 million e-readers were sold in 2008, according to Vinita Jakhanwal, principal analyst for small displays at the market research firm iSuppli. Last year, volume climbed to 5 million units. She expects that the market will be more than 20 million strong by 2013.

The heights in e-reader displays are commanded by Cambridge, Mass.-based E Ink. The company was founded in 1997 to commercialize electrophoretic displays developed at Massachusetts Institute of Technology’s Media Lab. More than 90% of the readers sold today use E Ink, Jakhanwal says, with the Kindle and the Sony Reader together accounting for 75% of the market. “There are other companies developing electrophoretic displays,” she says, “but they haven’t been able to make it in the market yet.”

The more immediate threats to E Ink, Jakhanwal says, are multifunctional devices such as Apple’s iPad. But given the advantages of electrophoretic displays in power consumption and aesthetics, e-readers will carve out a market niche for themselves, she predicts.

E Ink displays are based on microcapsules that contain charged black and white particles immersed in a fluid. When a negative electric field is applied to a display’s pixels, white titanium dioxide particles migrate to the surface, making the pixel appear white. When a positive field is applied, carbon black particles come to the top. The company closely guards the chemistry behind the fluid and the capsules.

E Ink also consumes little power compared with other displays, namely the liquid-crystal displays (LCDs) used in laptops and iPads, which require an energy-hungry backlight. E Ink displays reflect ambient light. Moreover, E Ink screens are also bistable, meaning that no energy needs to be added to keep the same image on the display. E Ink executives recently framed and mounted a display that has been running the same image since 2001, Peruvemba says.

The next frontier for e-readers is color, which would open new markets such as those for textbooks and periodicals.

Breaking out of monochrome has so far been elusive for the e-reader market. Equipping e-readers with color filters gobbles up a lot of light, making the displayed hues drab and the black and white tones dim. “There are approaches that actually render better color,” Peruvemba explains, “but there are challenges to getting them into production in the near term.” Indeed, he says, E Ink will adopt a red/green/blue/white filter. The company is doubling the contrast ratio of the underlying black-and-white display so as not to sacrifice the quality of the text once it is filtered.

Filters are the simplest technology to scale up because display makers are familiar with them. In fact, the Chinese display company Hanvon plans to introduce e-readers using E Ink’s color technology later this year.

Other firms see color as a way to break into e-readers. Liquavista, a spin-off of Philips Electronics, has been making display prototypes based on electrowetting. In this technology, colored oils are suspended between a layer of water and a hydrophobic surface. When a voltage is applied, the oil contracts, exposing a reflector underneath the display and hiding the color.

Companies that are working on entirely different technologies for color displays include Qualcomm, which has been developing a micro-electro-mechanical system (MEMS) dubbed Mirasol. The pixels in the Mirasol prototypes contain a reflective surface and tiny glass plates that can move up and down. The distance between the plates and the reflective surface determines the wavelength of the outgoing light that is reflected, allowing the device to offer the full spectrum of light.

Meanwhile, the Toronto-based start-up Opalux has been developing a technology based on polymers that mimic the diffraction properties of gemstone opals. The company pours polymer around a scaffolding of glass beads. It then dissolves the beads, yielding a lattice of holes in the polymer. The distance between these holes determines the wavelength of light diffracted by the polymer. When voltage is applied to the polymeric substrate, it expands, pushing the holes farther apart and lengthening the wavelength of the diffracted light.

But color displays for e-readers are still a long way off, says André Arsenault, Opalux’ chief technology officer. For now, the firm is concentrating on using its technology to combat counterfeiting of merchandise.

Despite its leading market share, E Ink isn’t complacent, Peruvemba maintains. “Some of our competitors will make pretty decent progress, and our job is to try to keep ahead,” he says. But E Ink is primarily focused on its biggest competitor: printed paper. “It has human nature on its side,” Peruvemba says. “We humans change very reluctantly.”