Insights: A decade after decoding the genome, scientists are still learning how to read the molecular map

[+]Enlarge
Credit: Newscom
At a ceremony in 2000, former president Clinton announced the completion of a working draft of the human genome. 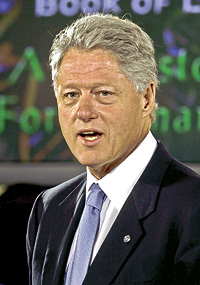 Credit: Newscom
At a ceremony in 2000, former president Clinton announced the completion of a working draft of the human genome.

The 10-year anniversary last month of a draft map of the human genome came and went with little fanfare. The media coverage that did mark the day in 2000 when President Bill Clinton announced the imminent arrival of a new era of molecular medicine mainly pointed out the disappointment of the project: People aren’t taking individually tailored drug cocktails to cure their ailments, and we haven’t found a cure for cancer. In fact, new drug approvals are falling, not rising. Rather than simplifying research, the big genomic reveal seems mainly to have illuminated the complexity of the human condition.

Examples of new drugs that can be described as “personalized”—meaning they are specific to one’s particular genetic makeup—can be counted on one hand. Even Novartis’ Gleevec, the leukemia treatment often held up as the biggest success story in personalized medicine, can’t be attributed to the mapping project. Tyrosine kinase ABL, the genetic target of Gleevec, was discovered decades before the genome was unveiled.

Maybe we need to reset expectations.

The fact is that a decade ago the government and media overstated the near-term usefulness of the information contained within that map. Joseph P. Miletich, senior vice president of R&D at the biotech firm Amgen, compares the genome project to someone handing over a parts list and incomplete blueprint for a fleet of aircraft carriers, each warship a little different from the next, and then asking you to fix one. With a vague idea of what each ship looks like, little information about the circuitry, and no clear understanding of what parts belonged to which carrier, the task is gargantuan.

Still, small signs of the promise of the genome map are surfacing. At the American Society of Clinical Oncologists’ annual meeting last month, Pfizer unveiled impressive results from a Phase I/II study of crizotinib, a drug that appears potent in combating lung cancer in a small subset of patients carrying the ALK fusion gene.

Crizotinib was originally designed as an inhibitor of c-Met, a protein kinase broadly implicated in tumor metastasis. But well into its development, researchers in Japan showed that the fusion of ALK with another gene was a driver of lung cancer.

The news prompted Pfizer to take a closer look at patients in its clinical trials. It found that those who responded to crizotinib carried the ALK gene. The company quickly readjusted its development plan to winnow out the right patients for the drug—the roughly 3% of lung cancer patients with the ALK fusion gene. Drilling down further, Pfizer subsequently found the drug to be highly effective in an even more specific subset of these patients: nonsmokers with a type of lung cancer known as adenocarcinoma and who lack a mutation in EGFR, a receptor commonly overexpressed in solid tumors. Among patients carrying those biomarkers, 25% carry the ALK gene.

The Pfizer experience underscores one of the major challenges of developing personalized medicines and companion diagnostics. Yet as Miletich points out, to have a good biomarker, researchers must first have a drug candidate that is actually probing the target of interest. And they need to know the inner workings of the entire disease pathway to understand whether that target is relevant in all patients. That kind of information tends to come only from large-scale clinical studies.

To return to Miletich’s aircraft carrier analogy, imagine that biomarkers are the measurements that can be made on one of those warships to understand what went wrong and whether the problem is fixed. With extensive blanks in the blueprint for the circuitry, how do you know what to measure? Picking too many measurements is time-consuming and expensive and can offer confusing results.

Furthermore, the cause of a patient’s cancer has rarely been as cut-and-dried as those treated by Gleevec or crizotinib. Cancers where a single mutation or a set of circumstances significantly increase the odds of a drug working are unusual, Miletich says. “Usually, we get more weighted genetic associations that are harder to value,” he says.

Most researchers believe the effort to personalize medicine is worthwhile. As companies get a better handle on the genetic drivers behind individual cancers, drugs will no longer be approved under the general umbrella of, say, lung cancer, but rather for a specific group of lung cancer patients.

Thus the challenge going forward is to not just pick apart the genetic drivers of each person’s disease, but to also figure out a rational way to develop companion diagnostics to empower clinical trials.

Families with members suffering from debilitating diseases rarely have sympathy for the meticulous ways of science. But Amgen’s Miletich is confident that a better blueprint is on the way. He points to systems biology approaches that are helping scientists develop a more complete understanding of disease pathways, the many ways a gene can be expressed, and ultimately which patients will benefit from particular drugs.

“You can see the aspiration and the vision. You can feel it gelling and moving in the right way,” Miletich says. “We’re going to get there. But I don’t want to oversell that it’s going to happen for every drug starting three years from now.”

Pharmaceuticals
Big pharma joins NIH’s Cancer Moonshot for a biomarker hunt
Business
A path to the brain’s secrets
Oncology
Cancer, redefined
Share X
To send an e-mail to multiple recipients, separate e-mail addresses with a comma, semicolon, or both.
Title: Great Genome Expectations
Author: Lisa M. Jarvis
Chemical & Engineering News will not share your email address with any other person or company.