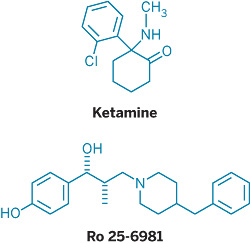 Ketamine and Ro 25-6981 stimulate a rapid increase in neuronal connections.

Unlike commercially available antidepressants, which require weeks or months to take effect, a single dose of ketamine can overcome depression in hours, a speed advantage that can spell the difference between life and death for suicidal patients. Researchers at Yale University School of Medicine have now discovered why the compound works so fast. Their findings illuminate the mechanisms underlying depression and also suggest new targets for its treatment.

Depression is believed to correlate with a reduction in the number of synapses, or connections between neurons, in the prefrontal cortex of the brain, notes Ronald S. Duman, who studies molecular psychiatry and pharmacology at Yale. Duman's team now reports that ketamine undoes this damage by increasing the number of these synapses in rats within 24 hours of administration, whereas traditional treatments do not (Science 2010, 329, 959).

The researchers determined that ketamine stimulates the mammalian target of rapamycin (mTOR) signaling cascade, which is involved in protein synthesis and synaptic modification in neurons. Ketamine activates this pathway by preventing the neurotransmitter glutamate from binding to the N-methyl-D-aspartate (NMDA) class of receptors on neurons.

"Together, these findings suggest that the rapid activation of mTOR-mediated signaling pathways may be an important and novel strategy for the rational design of fast-acting antidepressants," note John F. Cryan and Olivia F. O'Leary, neuropharmacologists at University College Cork, in Ireland, in a commentary about the work (Science 2010, 329, 913). They add that drugs that target this pathway would provide an alternative to the antidepressants currently on the market, nearly all of which function by boosting brain levels of neurotransmitters such as serotonin and norepinephrine.

The pharmaceutical industry is now trying to develop safe, fast-acting antidepressants that can be given orally and can't be abused, says Duman.

One lead is Ro 25-6981, a compound originally developed by Roche. Duman's team showed that the compound acts on the mTOR pathway, just as ketamine does. But Ro 25-6981 might avoid ketamine's side effects because it activates only the NR2B subclass of NMDA receptors, Duman says.

Researchers hope that ketamine substitutes will preserve another impressive characteristic of the anesthetic—its ability to overcome depression in patients who don't respond to conventional treatments. For example, Carlos A. Zarate Jr., chief of experimental therapeutics at the National Institute of Mental Health in Bethesda, Md., and colleagues recently reported that a single injection of ketamine reduced depression after just 40 minutes in bipolar patients who had failed to obtain relief from other treatments (Arch. Gen. Psychiatry 2010, 67, 793). Furthermore, only 6% of participants responded to placebo, but 71% responded to ketamine.

Neuroscience
Ketamine is revolutionizing antidepressant research, but we still don’t know how it works
Neuroscience
Ketamine may produce antidepressant effects through opioid receptors
Neuroscience
Psychedelics forge connections between neurons
Share X
To send an e-mail to multiple recipients, separate e-mail addresses with a comma, semicolon, or both.
Title: Antidepressant's Unusual Speed Explained
Author: Sophie L. Rovner
Chemical & Engineering News will not share your email address with any other person or company.