Controversy: Claim that microbe weaves arsenic into its DNA comes under fire

[+]Enlarge
Credit: Henry Bortman
Wolfe-Simon at Mono Lake, pulling a tube of mud from which to start microbial cultures in the lab. 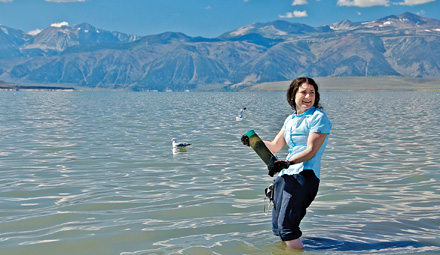 Credit: Henry Bortman
Wolfe-Simon at Mono Lake, pulling a tube of mud from which to start microbial cultures in the lab.

This month's high-profile announcement about a bacterium that thrives on arsenic is drawing criticism from scientists in multiple fields, including chemists. The study claims that the microbe can swap phosphorus for arsenic in its biomolecules, including DNA (C&EN, Dec. 6, page 36; Science, DOI: 10.1126/science.1197258). But outside experts say the data presented don't back this claim.

NASA astrobiologist Felisa Wolfe-Simon and her colleagues have been the subject of worldwide media attention since they described a microbe, scooped out of California's briny, arsenic-rich Mono Lake, that can grow under conditions nearly devoid of phosphorus, one of six elements common to all life on Earth.

In the days since the story broke, various scientists including University of British Columbia microbiologist Rosemary J. Redfield have posted critiques of the work online. Among several concerns, Redfield tells C&EN, is that the team didn't rigorously purify DNA samples "when it counted"; that is, when checking for arsenic content. She plans to submit a formal letter to Science about the work.

At Issue
[+]Enlarge
Wolfe-Simon's team claims its microbe replaces phosphorus (red) in its DNA with arsenic; other researchers say this claim isn’t supported by evidence.

Wolfe-Simon's team claims its microbe replaces phosphorus (red) in its DNA with arsenic; other researchers say this claim isn’t supported by evidence.

"My research team and I are aware that our peer-reviewed Science article has generated some technical questions and challenges from within the scientific community," Wolfe-Simon says in a statement. "Our manuscript was thoroughly reviewed and accepted for publication by Science; we presented our data and results and drew our conclusions based on what we showed. But we welcome lively debate since we recognize that scholarly discourse moves science forward," she adds. "We invite others to read the paper and submit any responses to Science for review so that we can officially respond."

Indeed, the team's case for arsenic becoming part of the microbe's DNA is not airtight because it depends on studies that, even when taken together, don't provide all the evidence they need, experts say.

Nanosecondary ion mass spectrometry (NanoSIMS) and inductively coupled plasma mass spectrometry, two of the techniques the team employed, are useful for measuring the relative concentrations of arsenic in microbial cells grown under various conditions, says Nicholas Winograd, a SIMS expert at Pennsylvania State University. NanoSIMS allowed the researchers to take mass spectra at different points, in effect to take an MS picture of the cell, Winograd says. "They've produced some solid analytical data," he says. But the way both types of MS experiments were run, "they break everything to pieces," he says. The team can detect arsenic's presence in cells, "but they don't know what the chemical environment of the arsenic is."

To learn more about arsenic's chemical environment, the team performed X-ray studies. Extended X-ray absorption fine structure (EXAFS) spectroscopy, one technique the team used, can reveal arsenic's oxidation state and average distances of any bonds it's making, explains Keith O. Hodgson at Stanford University, an expert on X-ray techniques. In its report, the team "looks at the average distances, they make comparisons, and they conclude that it's a reasonable assumption that arsenic could be part of a DNA backbone," Hodgson says. However, "there's no direct proof in the X-ray absorption data that the arsenic is a part of the DNA backbone."

The team "has not conclusively proven, in my view, that arsenic has been incorporated into DNA," Hodgson says. It'll take studies on isolated molecules with techniques such as X-ray crystallography or NMR to unambiguously prove that, he says.

The team also used a technique called X-ray fluorescence (XRF), which exposes a sample to an intense and highly focused beam of X-rays and then measures how atoms in that sample discharge the energy input by fluorescence emission in the X-ray wavelength range, explains Laszlo Vincze, an XRF expert at Ghent University, in Belgium. XRF provides information about which chemical elements are present in a sample and in what concentration. "XRF alone cannot be used to determine the specific location of an element in a given molecule structure," Vincze says. Combined with EXAFS, XRF can only demonstrate that arsenic is in an environment consistent with the idea that arsenic is in DNA but cannot provide indisputable proof, he adds.

"The evidence in the paper does not establish arseno-DNA," says Steven A. Benner, an expert in nucleotide chemistry at the Foundation for Applied Molecular Evolution, in Florida. Esters made with arsenic, as would have to appear in DNA, spontaneously fall apart in water with half-lives on the order of minutes, a huge chemical challenge for any microbe to surmount, he notes.

"On the other hand, there is not an easy explanation for the data that are present," Benner says. The work shouldn't be dismissed outright, but more biochemical tests should be done, such as checking for radioactivity in purified nucleic acids from microbes fed radioactive arsenic, he says.

Most likely, the team has discovered a bacterium that aggressively detoxifies arsenic species and scavenges phosphate from its surroundings to survive, says Gerald F. Joyce of Scripps Research Institute, an expert in RNA and origin of life research. "This is an amazing story about how life can adapt to extreme conditions," he says.

"We've been concerned that some conclusions have been drawn based on claims not made in our paper," Wolfe-Simon tells C&EN. In response, Science is making the article freely available for a two-week period, says Ginger Pinholster, director of the American Association for the Advancement of Science's Office of Public Programs. And at a Dec. 7 lecture streamed on NASA's website, coauthor Ronald S. Oremland of the U.S. Geological Survey said the team will freely provide their bacterial strain to researchers interested in testing it.

"It is a shame when a bright and enthusiastic researcher like Felisa isn't better advised by her chemistry colleagues," says John D. Sutherland, an organic chemist at the MRC Laboratory of Molecular Biology in Cambridge, England, who has written a letter to the editor of C&EN critiquing the findings. "Such a dramatic claim makes rock-solid characterization absolutely mandatory."