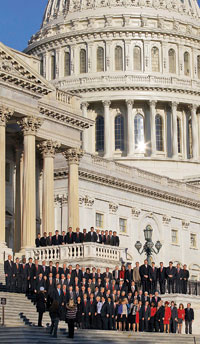 An overhaul of the federal law that governs commercial chemicals is not at the top of the congressional agenda in 2011. However, this issue is expected to crop up later in the year, industry representatives tell C&EN.

In the past two years, the House Energy & Commerce Committee held hearings about the need to update the 1976 Toxic Substances Control Act (TSCA). Last year, this committee met with industry and environmental groups in a series of closed-door discussions on possible changes to that law. This led to introduction of a House TSCA reform bill in July 2010 (C&EN, Aug. 2, 2010, page 11). But by then, it was too late to gain the political traction needed for refinement and passage of the measure before the end of the 111th Congress.

For 2011, “TSCA reform will take a backseat until the second half of the year,” predicts Larry Sloan, president of the Society of Chemical Manufacturers & Affiliates (SOCMA). The group represents mainly small and midsized chemical producers.

Likewise, Christopher Cathcart, president of the Consumer Specialty Products Association, expects bipartisan TSCA reform legislation to emerge at some point during the 112th Congress—although he says it may not come up until 2012. CSPA member companies are formulators of household and industrial products.

Scott Jensen, a spokesman for the industry group American Chemistry Council, says anticipated congressional action during the second half of the year probably won’t result in a complete rewrite of TSCA. What’s more likely is that Sen. Frank R. Lautenberg (D-N.J.) will introduce a TSCA reform bill in the Senate, while the House Energy & Commerce Committee may hold more hearings on changes needed to the chemical control law, Jensen says.

SOCMA’s Sloan is optimistic that new GOP leaders in the House, notably Chairman Fred Upton (Mich.) of the Energy & Commerce Committee, will be open to modernizing TSCA.

The 112th Congress is not likely to ignore TSCA because the need to revise this law stems from a growing lack of confidence about the safety of the chemical industry’s products, points out Richard Denison, senior scientist for the Environmental Defense Fund, an environmental group. This dearth of confidence is demonstrated by states increasingly adopting restrictions on or banning certain chemicals, such as brominated flame retardants.

A regulatory area that will garner early congressional attention is pesticides. Because House Republicans are expected to aggressively scrutinize all Environmental Protection Agency programs, the regulation of pesticides—particularly the agency’s controversial Endocrine Disrupter Screening Program (EDSP)—is likely to be in the crosshairs.

A December 2010 letter from Rep. Darrell E. Issa (R-Calif.), chairman of the House Oversight & Government Reform Committee, requested various groups to identify regulations that negatively impact jobs. In response, the Center for Regulatory Effectiveness (CRE), a watchdog group that is opposed to nearly all regulations, urged the chairman to investigate EDSP. EPA was required to develop the program to screen chemicals for their potential to interact with hormones in people as part of the 1996 Food Quality Protection Act and of amendments to the Safe Drinking Water Act. After more than a decade of planning, EPA launched the program in October 2009, focusing initially on pesticide chemicals.

In its letter, CRE claimed that the tests used in EDSP are unreliable and have not been demonstrated to be adequate. “The cost of performing the EDSP tests will not likely cost many jobs, but the test results might,” wrote Jim J. Tozzi, head of CRE. “Failing these tests could result in a product ban or regulations so stringent that persons involved in their manufacture could lose their jobs.”

Another challenge facing EPA’s pesticide program that will likely grab lawmakers’ attention this year is a 2009 court order to require permits under the Clean Water Act for pesticides sprayed near water. In a final rule, issued under the George W. Bush Administration in 2006, EPA excluded pesticides that comply with the Federal Insecticide, Fungicide & Rodenticide Act from being considered pollutants under the Clean Water Act because their effects on aquatic environments are already considered under FIFRA.

The 6th U.S. Circuit Court of Appeals struck down EPA’s interpretation in 2009, ruling that pesticide residues and biological pesticides are pollutants under the Clean Water Act. As it currently stands, pesticide discharges to U.S. waters will require Clean Water Act permits beginning on April 9.

Late last year, members of both the House and Senate introduced legislation that would exempt pesticides that comply with FIFRA from needing Clean Water Act permits. Such legislation failed to move but is likely to be introduced again this year by Rep. Frank D. Lucas (R-Okla.), chairman of the House Agriculture Committee. It is unclear whether there is enough interest in the Senate to pursue such a bill. Observers predict, however, that Congress will use the issue as an example of EPA’s aggressive overregulation, despite the fact that EPA was ordered by the courts to develop the rule.