by Jeff Johnson and Cheryl Hogue 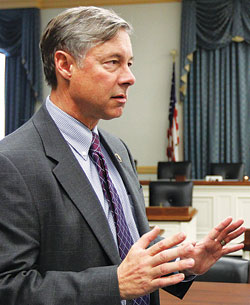 All have made clear their desire to investigate and eliminate regulations that they argue have killed jobs, held back American businesses, and hurt workers and their families. Over the next three months, they will hold multiple hearings to probe past actions of the Obama ­Administration.

Upton and Issa announced their intentions to plunge into reviews even before being sworn in on Jan. 5.

Last November, before taking over the Energy & Commerce Committee, Upton wrote to Energy Secretary Steven Chu criticizing the Administration’s stimulus spending and demanding answers from Chu to a detailed list of questions about spending of American Recovery & Reinvestment Act of 2009 funds by the Department of Energy. And last month, Issa sent requests to some 150 trade associations, think tanks, and corporations seeking recommendations of regulations that have “negatively impacted job growth of your members’ industries” and should therefore be examined by his committee.

Several associations—the American Petroleum Institute, the National Association of Manufacturers, and the Society of Chemical Manufacturers & Affiliates—acknowledge responding to the letters and say they identified a wide range of regulatory issues of importance to them, many in the environmental arena.

In addition to the regulations that will be looked at as a result of Issa’s letter, he and Upton have made it clear that their top environmental priority will be challenging the Environmental Protection Agency’s plan to control industrial emissions of greenhouse gases, especially carbon dioxide, through provisions of the Clean Air Act.

Their view has the backing of most Republicans, some Democrats, and many industries.

“We will not allow the Administration to regulate what they have been unable to legislate,” Upton says about EPA’s planned regulatory schedule for greenhouse gas reductions, announced by Administrator Lisa P. Jackson on Dec. 23, 2010 (C&EN, Jan. 3, page 10). “EPA has its foot firmly on the throat of our economic recovery.”

The Democrat-controlled Senate is off to a slower start. In some cases the membership of committees is still under negotiation. But in the face of House Republican statements, several Senate Democrats have fired off salvos of their own, warning Republicans to back off from attacks on environmental protections.

During her first briefing of the new Congress, Sen. Barbara Boxer (D-Calif.), chairwoman of the Senate Environment & Public Works Committee, warned Upton about legislative attempts to roll back environmental regulation.

“I will use every tool available to me to oppose any legislative effort that threatens the health, safety, or well-being of the people of America,” Boxer said. This includes any move by Upton and his committee to stop EPA from meeting its Clean Air Act requirements, she noted, adding that these obligations were congressionally mandated and court affirmed. She was joined by Democratic Sens. Tom Harkin (Iowa), Frank R. Lautenberg (N.J.), Benjamin L. Cardin (Md.), Sheldon Whitehouse (R.I.), and others in defense of the agency.

Additional energy issues likely to garner congressional oversight include oil and gas regulation and development. House Republican Lamborn says he will focus on the Department of the Interior and what he sees as its tardiness in opening federal lands to energy development, particularly oil-shale R&D projects in the West, including his home state of Colorado. He has vowed to bring fellow Coloradan Interior Secretary Ken Salazar before his committee to answer his charges.

On other energy topics, congressional aides expect Senate Energy & Natural Resources Committee Chairman Jeff Bingaman Jr. (D-N.M.) to continue his interest in legislation setting national standards to encourage development of renewable energy sources. However, in this sharply divided Congress, it is unclear whether energy legislation will advance, aides say, adding that a brief window of opportunity for energy bills might open by summer once politics settle down. But that window may close with the run-up to the 2012 elections, they add.

Jonathan Lash, president of the environmental and energy think tank World Resources Institute, agrees that the possibility for energy legislation moving through Congress in this political environment is bleak.

He notes that the controversial greenhouse gas regulation will be left to the states to administer, not EPA, and as yet there is no regulation; it is now only under development. Eventually, Lash says, utilities and others may turn to Congress for clarity about how they should address carbon emissions in the future. Utilities, he notes, are making huge long-term investment decisions on new power plants—whether to build natural gas, coal, nuclear, or renewable energy facilities—and need certainty about future regulations.

“They need answers to questions over what will be the future cost of carbon dioxide emissions. They have an interest in having Congress address this question,” he says.

On the other hand, Lash notes the “thunderous” opposition to EPA regulation of greenhouse gases, which makes legislation unlikely.

Meanwhile, there is a possibility for passage of specific, marginal energy legislation to encourage and support energy efficiency and green construction and to promote clean, carbon-free energy development, Lash says. But, he adds, hurdles are high. “Most likely,” he says, “the outcome will be nothing.”

Congressional action, however, on EPA’s greenhouse gas regulation and inaction on any energy bill will have an international impact, says Jonathan Pershing, U.S. deputy special envoy for climate change. Failure of the U.S. to cut its greenhouse gas emissions, as it pledged to do in late 2009 under the Copenhagen Accord, “will be noticed,” he says. Under the Copenhagen deal, the U.S. said it intended to cut its emissions 17% from 2005 levels by 2020, “in conformity with anticipated U.S. energy and climate legislation.”

Lack of action by the U.S., historically the world’s largest emitter, could limit the willingness of other countries, notably China, to fulfill the promises they made in the Copenhagen Accord to control their releases of greenhouse gases.