A Most Important Meeting

Biochemistry: A sugar that coats the human ovum and is recognized by sperm may help explain the first steps of fertilization 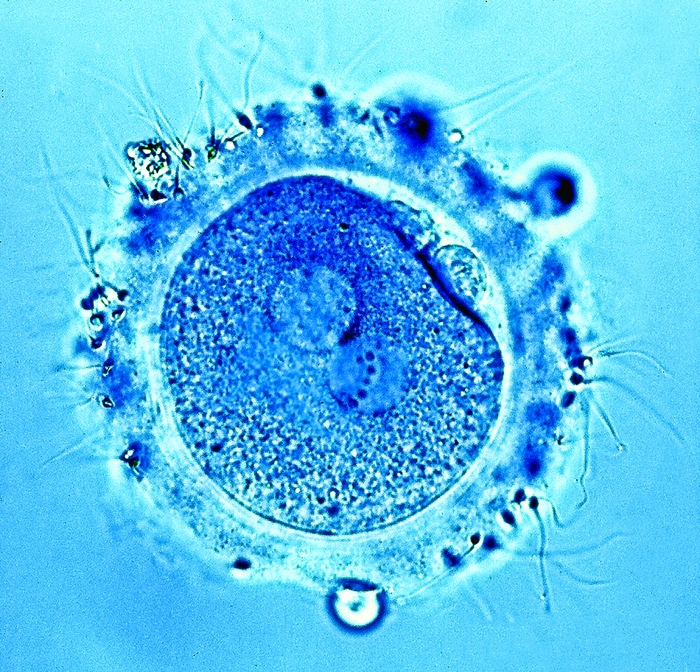 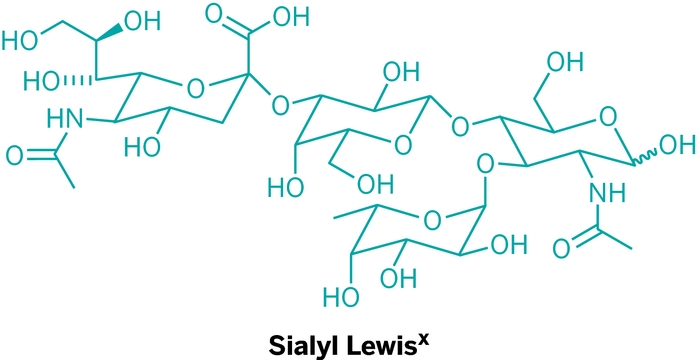 Sperm making the acquaintance of an egg (which is about 100 μm wide), likely by means of the sialyl Lewisx sugar shown.

Life’s most important rendezvous occurs between a sperm and an egg, and scientists have long debated precisely how this get-together occurs.

Now, researchers based in England, China, Taiwan, and the U.S. have identified a sugar, located on a human ovum, that is recognized by human sperm (Science, DOI: 10.1126/science.1207438). The identity of the sugar, called sialyl Lewisx, is an essential piece of information required to unscramble the biochemical steps taken during fertilization and may lead to a better understanding of infertility and better treatments for it, says Anne Dell, the biochemist at Imperial College London who led the research.

In particular, with the precise knowledge of a human ovum’s carbohydrate structure, researchers will be more likely to find the protein on human sperm that recognizes the sugar, comments Luca Jovine, an X-ray crystallographer who studies fertilization-related proteins at Karolinska Institute in Stockholm.

The work is also “a real technical achievement,” comments Pablo E. Visconti, who studies fertilization at the University of Massachusetts, Amherst. Human egg samples, he explains, are so rare that it’s hard to get enough samples to study low-volume components of fertilization biochemistry.

When Dell and her colleagues, who include the University of Missouri’s Gary F. Clark and the University of Hong Kong’s William S. B. Yeung, went looking for the identity of the sugary antennae located on ZP proteins, they found that the carbohydrate surface of human ZP was covered in sialyl Lewisx. This tetrasaccharide has an N-acetylglucosamine base that branches to a fucose on one side and to galactose and N-acetylneuraminic acid on the other.

The researchers found that sialyl Lewisx is one of the very few sugars found on human egg cell surfaces. “This was a big surprise for two reasons,” Dell says. First, mouse ova have a diverse mix of terminal sugars, and one would have suspected that the sugars on human eggs would be equally diverse, if not more so, instead of less. Second, sialyl Lewisx is already known to scientists. The sugar is involved in helping white blood cells exit the bloodstream to get to infected tissue, but it is typically “only a very minor constituent on egg cells,” Dell says.

Finding this sperm protein will provide “essential proof” that the sperm-egg recognition required for fertilization takes place by means of sialyl Lewisx, Visconti says. He points out that a competing fertilization theory, based on genetic studies, proposes that a sperm recognizes the overall macromolecular structure of the egg’s protective coating.

There’s also a chance that both theories are correct, Jovine says. “I wouldn’t be surprised if evolution has introduced a bit of redundancy into the fertilization process” to ensure survival of the species.