New Method Is Spot On 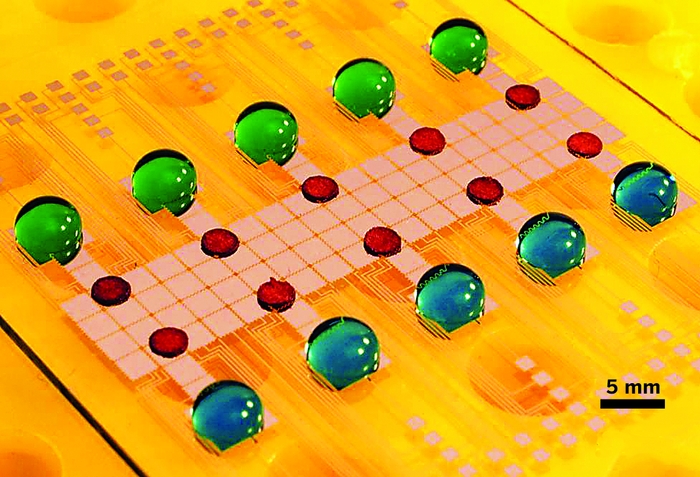 Dried blood spot technology, the analysis of blood spotted and dried on paper cards, has long been used to screen newborns for metabolic disorders because it requires only small sample volumes. The method is also growing in popularity for pharmaceutical studies because of the ease of storing and shipping the cards (C&EN, Jan. 17, page 13). But despite the advantages of dried blood spot analysis, the method has also required laborious extraction and sample preparation.

The Toronto researchers, Aaron R. Wheeler and coworkers, have now developed two digital microfluidic methods that could make analyzing dried blood spots more convenient. In digital microfluidics, discrete droplets of sample and reagents are manipulated and analyzed on an open surface by applying electrical potentials to an underlying array of electrodes.

In the first method, they spot a drop of blood directly on the device, allow it to dry, and analyze it. In the second, they punch out a disk from a dried blood spot on a paper card and place it on the device for analysis.

The digital microfluidic devices need no modification to be able to accept the paper disks. “We take the punch, put it on the device, put a top plate on it, and it’s ready to go,” Wheeler says. “It’s as simple as that.”

Wheeler worried that solvent droplets would get stuck on the paper or carry the paper along with them, but neither scenario was a problem. “We move droplets onto these little paper plugs, and we can move the droplets right off them,” he says. “There’s enough friction and capillary forces to hold the paper in place while the droplet moves away.”

Wheeler’s team collaborated with researchers at Newborn Screening Ontario (NSO) in Ottawa, an organization that performs all newborn screening in Ontario. The team used the microfluidic method paired with tandem mass spectrometry to analyze samples for amino acids that are biomarkers for serious metabolic disorders in infants. The results obtained with the microfluidic methods were comparable to those obtained by the standard methods used at NSO.

“The concept presented for this prototype device is truly revolutionary,” says Neil Spooner, a proponent of dried blood spot analysis at GlaxoSmithKline in Ware, England. A “reliable, robust, and affordable” commercially available version of the device could be used in a variety of settings, including animal testing facilities, doctors’ offices, and patients’ homes, he notes. “I look forward to the further development of this technology.”

Environment
For a new twist on a common lab tool, evaporation is friend, not foe
Analytical Chemistry
Putting DNA Diagnostics On Paper
Analytical Chemistry
Microneedle Patches Retrieve Multiple Biomarkers From Skin
Share X
To send an e-mail to multiple recipients, separate e-mail addresses with a comma, semicolon, or both.
Title: New Method Is Spot On
Author: Celia Henry Arnaud
Chemical & Engineering News will not share your email address with any other person or company.