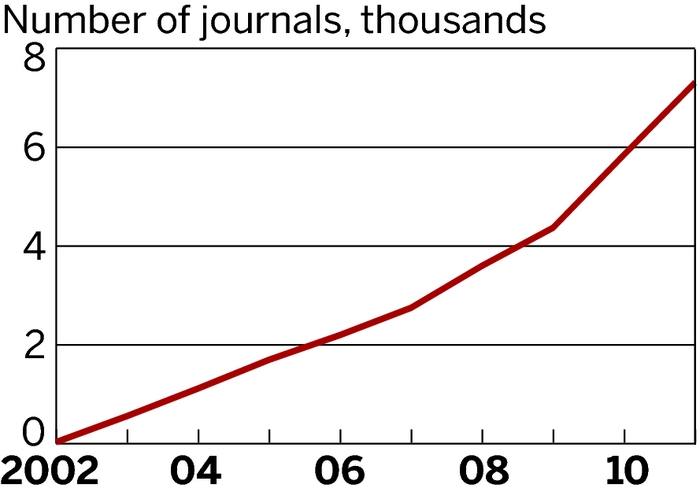 The number of open-access journals soars.NOTE: Data as of 11/17/2011.SOURCE: Directory of Open Access Journals

Momentum for increased access to results of scholarly research, particularly results of taxpayer-funded research, has grown steadily over the past few years. But what started as an argument to enhance dissemination of scientific knowledge and provide relief for cash-strapped academic librarians has evolved into claims that open access will boost scientific productivity, innovation, and economic growth.

Berlin Declaration on Open Access to Knowledge in the Sciences & Humanities

Open-access advocates from North America and Europe touted that message loud and clear earlier this month at the international Berlin 9 Open Access Conference, an annual meeting to support open access that was first held in Berlin. Now in its ninth year, the conference was held this year for the first time in North America. About 275 people attended the meeting at the Howard Hughes Medical Institute in Chevy Chase, Md.

The arguments for open access are changing, pointed out Caroline Sutton, cofounder of Scandinavia-based Co-Action Publishing and president of the Open Access Scholarly Publishers Association, a coalition of open-access publishers. “One of the common arguments earlier was the libraries making the case that budgets are shrinking and subscription prices are rising,” she noted. Today, she said, advocates are linking the arguments for open access to solving grand challenges such as environmental and global health problems, as well as enhancing future economic growth.

Neil M. Thakur, special assistant to the deputy director for extramural research at the National Institutes of Health and program manager for NIH’s public access policy, argued that open access will enhance scientific productivity. By using machine readers to quantitatively analyze the literature, aggregate data, and run mathematical computations, he suggested, researchers can better extract the information they need.

Instead of incorporating just dozens or hundreds of papers into their thinking each month, researchers could perhaps incorporate thousands of papers, leading to gains in productivity, Thakur said. Some aspects of the current publishing system, however, make it difficult for machines to crawl through the literature, he noted.

Publishers have numerous data formats, download caps, multiple archives, and barriers to access, Thakur said. Different access protocols and usage rights “are difficult to determine by a computer on the fly,” he noted. People outside publishing are making rapid advances in search, retrieval, and analysis, he stressed, but they can’t apply their technology to the scholarly literature.

The White House Office of Science & Technology Policy (OSTP) and the European Union both recognize the potential of open access to stimulate innovation and economic growth. Just days before the conference, OSTP released two requests for information: one on expanding public access to federally funded research in peer-reviewed scholarly journals, and the other on digital data sharing. OSTP wants to know how such activities could grow the U.S. economy and improve the productivity of the scientific enterprise.

Likewise in the EU, government officials have been holding public consultations on scientific information in the digital age and the free movement of knowledge. Last year, officials decided to make open access a principle for all EU-funded research. Now they are preparing “a recommendation to member states that will spell out what is needed to improve terms of access, management, and preservation of scientific publications and data,” said Neelie Kroes, vice president of the European Commission and the European digital agenda commissioner. Legislation that would make open access mandatory for EU-funded research results is expected in the next EU research budget cycle, which begins in 2014.

The goal of Berlin 9 was to persuade academic institutions in North America to make research more accessible to the public by adopting the principles of the Berlin Declaration on Open Access to Knowledge in the Sciences & Humanities. This open-access manifesto was initiated in 2003 by the Max Planck Society of Germany and the European Cultural Heritage Online project, after the first Berlin Open Access Conference. On the first day of this year’s meeting in Maryland, 33 North American institutions announced that they had signed the declaration, bringing the total number of signatories worldwide to 338.

“America, Europe, and Asia account for roughly equal proportions of scholarly publications in many fields,” said Bernard F. Schutz, a physicist with the Max Planck Institute for Gravitational Physics. “The Berlin process has spread across Europe and is beginning to go into Asia,” he said. The meeting was held in North America this year, he emphasized, to engage publishers, librarians, researchers, funding agencies, and other stakeholders in the region.

The Berlin Declaration aims to get institutions to support open access through internal policies, such as requiring researchers to deposit the results of their work in an institutional repository, Schutz said. For a publication to be considered open access, the declaration stipulates that its full text and supplementary materials must be accessible in a repository, without restrictions on noncommercial reuse.

The first seven Berlin conferences, held in Europe, focused on the definition of open access and examined its potential impacts. Last year the meeting took place in Beijing, where advocates emphasized the need for open access to inform citizens. Next year it will move to South Africa, with the goal of promoting “open access to information as a human right,” said Heather Joseph, executive director of the Scholarly Publishing & Academic Resources Coalition, an open-access advocacy group.

Meanwhile, open-access journals are proliferating at a phenomenal rate, with the Directory of Open Access Journals adding about four new titles each day. Hosted by Lund University and supported financially by several organizations advocating open access, the directory aims to include all open-access scientific and scholarly journals that use peer review or editorial quality control.

Open-access journals are also seeing huge growth in the number of papers published. In 2005, four leading open-access publishers—Public Library of Science, BioMed Central, Hindawi, and Copernicus—published a total of about 5,000 articles, Sutton said. In 2010, that number rose to 33,000, she noted.

Despite the flurry of activity and support from governments around the world, scholarly research articles that are freely available online still represent less than 10% of the total number, open-access advocates note. Some of them predict that within five years more than 50% of journal articles will be freely accessible online. Other people, however, are not so optimistic because of numerous barriers.

One barrier is how researchers are evaluated for promotion and appointment, said Harold E. Varmus, director of NIH’s National Cancer Institute and former NIH director. Evaluations are frequently based on the number of articles published in select journals that are subscription based and restricted in their distribution, rather than on what the researcher has actually accomplished, he stressed.

As momentum for open access builds, several publishers of scholarly journals, including the American Chemical Society, which publishes C&EN, are experimenting with various business models to make articles free online. One model, for example, allows authors to pay a fee to have their research published in the open. But many publishers who have “author pay” options restrict reuse of the content.

Some open-access advocates consider such restrictions “pseudo” or “hobbled” open access. “Authors are not getting what they pay for,” said Michael W. Carroll, a law professor at American University Washington College of Law. Pseudo open-access publishers, he noted, “are restricting the entrepreneurial creative uses that we want to encourage in an open environment.”

Comments
Robert Buntrock (December 6, 2011 4:40 PM)
Interesting (and depressing if correct) that only 3423 articles out of 674,622 (0.5%) are searchable. This would make open access articles less valuable. Also, Thakur's vaunted "machine readers" would provide no value added post-processing for the vast majority of open access artciles by data mining.

Thakur's "machine readers" may indeed facilitate data mining per se but I'm not convinced that such readers would do that good a job determining relevance of the articles or the information within. Information may include data but goes further in developing relevance and feeding knowledge.
Reply »