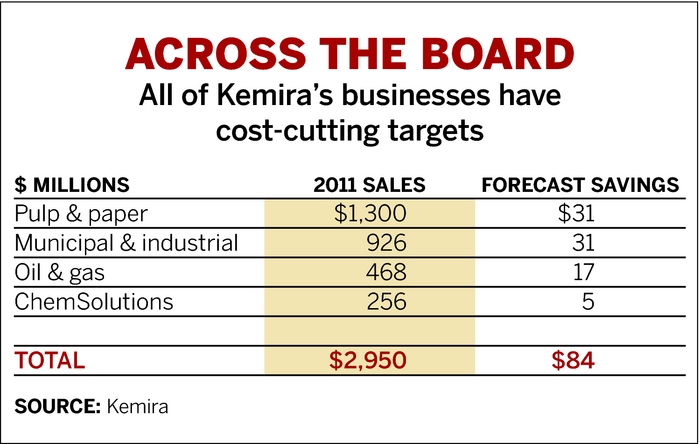 The past 18 months have not been good for Helsinki-based Kemira. Since the start of this period, the firm’s pretax profit margin slid to 6.3% from an already modest 8.1%. And the company says it still faces particularly tough market conditions in Europe and North America, including a sharp drop in demand for some chemicals it sells to the wastewater industry in Southern Europe.

To lead the firm back into profit growth, in April the company brought in Wolfgang Büchele, formerly chief executive officer of Hungarian plastics producer Borsodchem, as its new president and CEO. An equally important credential is the 14 years Büchele spent at BASF, where he held a variety of senior positions, including head of fine chemicals.

After just three months on the job, Büchele unveiled a plan to capture growth that has eluded the firm in the emerging markets of South America and Asia by changing its management structure and product focus. As part of its plan, the company is now poised to make deep cuts to its businesses in Europe and North America.

“To make an omelet you first have to crack an egg,” Jyrki Mäki-Kala, Kemira’s chief financial officer, told analysts and journalists at a recent briefing by the company’s management at the London Stock Exchange. The egg-cracking Mäki-Kala invoked involves the potential closure of up to 14 of the firm’s 74 sites and the layoff of 600 of the firm’s 5,200 employees. The plants on the chopping block are in Europe and North America. 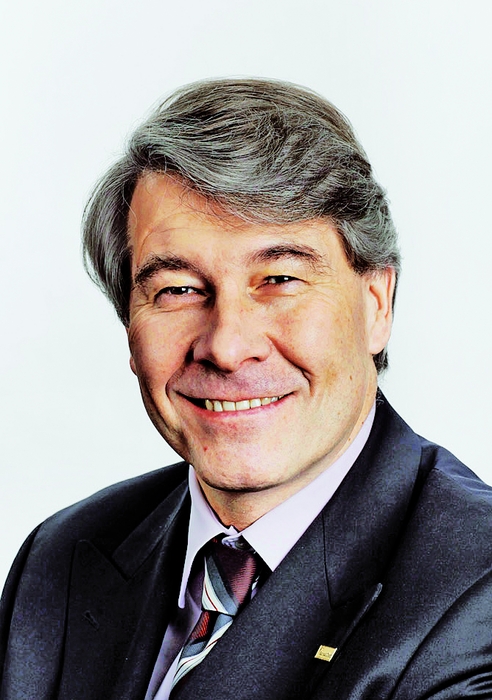 Kemira estimates that it held an 8.5% share of the $36 billion global water treatment chemicals market last year. The firm is in the unusual position that its sales in emerging markets are flat while in the mature markets of Europe and North America they are growing at about 3% annually. Kemira predicts pretax profit for full-year 2012 will remain at last year’s level of $219 million on flat sales of about $3 billion.

Meanwhile, other companies with major water chemical businesses such as Ashland, BWA Water Additives, Dow Chemical, and Nalco report sales growth rates above that of the overall economy. By implementing its restructuring program, Kemira hopes to lift its sales growth in emerging countries to 7% and—at a minimum—maintain its 3% growth in mature markets.

Kemira’s products include coagulants, flocculants, and scale inhibitors that it sells to three main fields: pulp and paper manufacturing, municipal services and industrial manufacturing, and the oil and mining industry. Additionally, the firm’s ChemSolutions business produces formic acid, which it sells to sectors that include the pharmaceutical industry.

The cost cutting and efficiency improvement plan, branded as Fit for Growth, is aimed at delivering annual savings of $77 million starting in 2014. Some $38 million is set to come from site closures, $27 million from staff layoffs, and $12 million from running the company more efficiently.

Fit for Growth will address all of the company’s costs, including raw materials and energy. And logistics and maintenance costs can be reduced, Büchele said.

To be more efficient the company aims to undertake fewer but larger business transactions, in part by improving its customer segmentation and serving smaller customers through distributors. Kemira has more than 12,000 customers, of which 2,200 provide 90% of its sales. “There are 10,000 customers that don’t contribute much. We want to keep them … but via service partners,” Büchele said.

Kemira is not just stripping out costs but also is seeking to modify its business organization to facilitate growth, Büchele said. On Oct. 1, the firm introduced a new management structure in which decision making and profit and loss accountability have been handed down to four regional business units with headquarters in Europe, North America, South America, and Asia. A leaner management structure featuring fewer levels of organization also has been put in place. “This will make the organization faster and more agile so that business decisions can be made in the regions and not in Helsinki,” Büchele said.

Although the company is consolidating assets in Europe and North America, “in Asia and South America we want to continue to build,” Büchele told the analysts at the meeting. Kemira already has new capacity coming on-line in Asia via a 51% stake in an Indian joint venture due to start making the coagulants aluminum chloride and ferric sulfate this month. It also has a paper-sizing chemical plant in Nanjing, China, expected to start up in the first quarter of 2013. The output from the two new plants will deliver a “wave of growth” boosting annual sales by up to $40 million, said Joe Chan, head of ­Kemira’s business in the Asia-Pacific region.

The company’s fastest-growing products in emerging regions include water chemicals for the pulp sector in South America and the paper industry in Asia. The provision of water chemicals for the oil and mining segments is among the firm’s most profitable activities, both in emerging markets and in the shale gas regions of North America. “We feel very strong here,” Büchele said.

By capturing growth in sectors such as oil and gas and by cutting costs through restructuring activities, the company believes it can increase its pretax profit margin to 10% per year in 2014. Yet analysts at the meeting let Kemira managers know that they are skeptical about the firm’s ability to reverse the profit decline.

Thomas Swoboda, a stock analyst with Frankfurt-based MainFirst, challenged Büchele on the level of confidence the company has in achieving the 10% profit margin target. Büchele gave a sharp response. “It’s not out of thin air. These are specific itemized projects with clear responsibility for them resting on individuals,” Büchele told him.

When Martin Evans, an analyst with JPMorgan Cazenove, commented that “10% is a low number by industry standards,” Büchele’s response was that the 10% target is an initial stage in the company’s growth strategy. “Let us think about 10% first,” he said.