Firm is seeking the most effective ways to collaborate 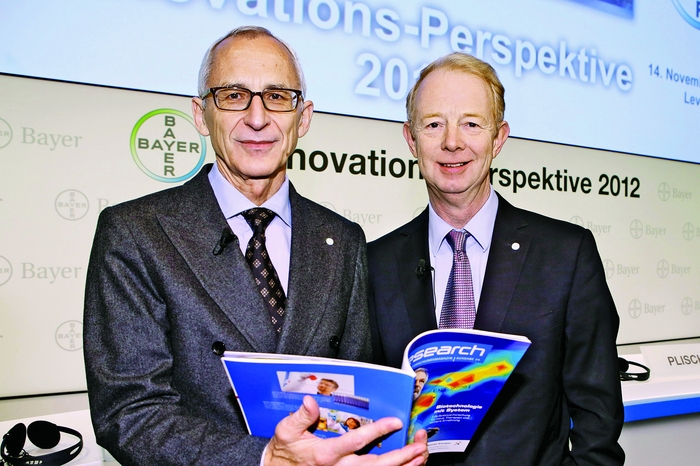 Each year, Bayer spends $860 million—or about one-quarter of its $3.1 billion R&D budget—on projects that it runs with more than 800 research organizations. R&D partnerships are so important to Bayer that even in these tough economic times the company plans to increase their numbers. But to generate more research for its dollars, it is deepening its most successful partnerships and seeking better ways of selecting new ones.

“Partnerships are not an option but a must,” said Wolfgang Plischke, Bayer’s board member responsible for innovation, speaking recently to journalists at an innovation strategy briefing at the firm’s headquarters in Leverkusen, Germany. They are a “proven means of increasing the probability of success,” he said.

If partnerships are to reach their potential, however, they “require the best possible structure,” said Plischke, who was joined at the meeting by Bayer’s chairman, Marijn Dekkers, and senior members of Bayer’s R&D management team.

As part of an effort to get the structure right, the company is seeking to extend and deepen its most successful partnerships. One example is Bayer’s recent decision to extend a five-year partnership with RWTH Aachen University in Aachen, Germany, to develop catalysts and catalytic processes by an additional five years.

Bayer expects its investment in RWTH over the 10 years to total $25 million. The money funds the CAT Catalytic Center, which features five labs and a team of 30 researchers at the university. Joint research projects include the development of a process to make polyols for use in polyurethane using carbon dioxide as a raw material.

RWTH provides Bayer with capability that it lacks in-house. “The center has become a magnet for top researchers from around the world who have access to the latest equipment and who can benefit from the dense network of contacts to other institutions in Germany and abroad,” said Walter Leitner, a professor of technical chemistry and petrochemistry at RWTH and scientific director of the CAT Catalytic Center.

In another example of a partnership that the company is extending, Bayer and the German Cancer Research Center have each invested $13 million in a program to jointly develop molecules, mechanisms, and models that could lead to cancer treatments. Some of the 19 projects that have already been developed by the partners have met key milestones and been taken to the next phase of drug development, Plischke said.

In addition to expanding successful partnerships, Bayer is seeking to secure solutions from organizations it does not have deep relationships with by means such as crowdsourcing. Crowdsourcing involves the online outsourcing of certain tasks to a distributed group of people or organizations.

Bayer has started using this approach with its Grants4Targets program, in which it accepts applications online from academic groups and start-ups for grants to develop novel targets and disease-related biomarkers in the fields of cardiology, gynecology, oncology, and hematology. Research grants from Grants4Targets range from $6,000 to $160,000. Since its launch in 2009, Grants4Targets has attracted 825 research proposals, of which Bayer has accepted 114.

An interest in crowdsourcing is spreading to other parts of Bayer. Crowdsourcing “is certainly something that we are thinking about now in CropScience,” C. David Nicholson, head of R&D for Bayer CropScience, told C&EN.

Until now, CropScience has focused on straightforward academic collaborations and alliances with biotech firms. “With crowdsourcing you use the power of a crowd to solve a particular problem or to help you design how you investigate a particular problem. It’s an approach where you can have a large number of different collaborations,” Nicholson said.

Bayer is also taking a different approach to developing relationships with biotech start-ups in the U.S. To attract biotech firms as partners, the German company has created CoLaborator, a program providing laboratory space for start-ups at its site in San Francisco. Scientists from the start-ups have access to Bayer’s expertise and equipment.

CoLaborator has attracted two biotech firms to set up at its site since the program’s launch in September. “The focus here is on new targets, drug candidates, and innovative technologies that overlap with Bayer’s research strategy,” Plischke said.

Nicholson gave a word of caution about novel collaborative approaches. “As big as we are, we have to have focus. We look specifically, primarily to focus on collaborations where they can assist with the gaps in our pipeline, technology, and research projects,” he said of Bayer’s potential partners. But if the research meets Bayer’s criteria, then ultimately, the message is this: “Hey, we would like to collaborate, we are open to collaborate, and we are open to R&D alliances.”