[+]Enlarge
Credit: Adapted from Science
Like mad cow disease prions, proteins associated with Alzheimer’s and Parkinson’s can misfold and form aggregates in the brain, such as amyloid plaques (~50 μm in diameter) and Lewy bodies (5–10 μm). 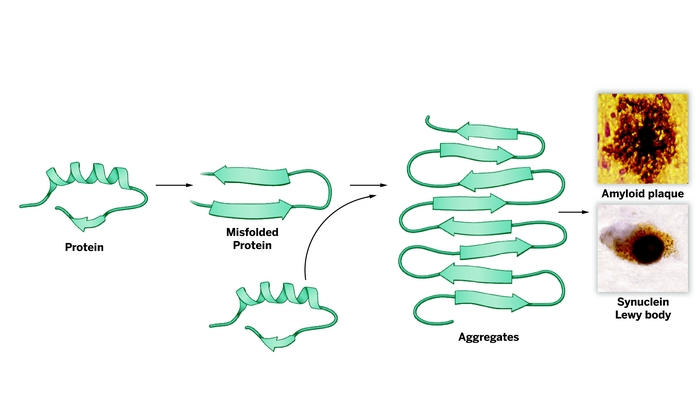 Credit: Adapted from Science
Like mad cow disease prions, proteins associated with Alzheimer’s and Parkinson’s can misfold and form aggregates in the brain, such as amyloid plaques (~50 μm in diameter) and Lewy bodies (5–10 μm).

Scientists used to think that livestock infected with mad cow disease and people afflicted with Alzheimer’s or Parkinson’s diseases didn’t have much in common. But studies published this year have strengthened the link between these neurological disorders. In mad cow disease, the infectious agent is a protein called a prion, which can misfold and slowly recruit similar proteins to do the same. The prions end up clumping, spreading through the brain, and clogging the nerve-cell network. Neuroscientists have suspected that the bad actors in diseases such as Alzheimer’s and Parkinson’s are also misfolded proteins. Confirmation came in June, when Kurt Giles and Stanley B. Prusiner of the University of California, San Francisco, and coworkers reported that amyloid-β, a peptide associated with Alz­heimer’s, exhibits prionlike behavior. When the team injected a misfolded synthetic version of amyloid-β into the brains of mice, the corrupt protein coerced a similar peptide in the rodents to misfold and form plaques (C&EN, July 2, page 24; Proc. Natl. Acad. Sci. USA, DOI: 10.1073/pnas.1206555109). Then in November, a team led by Virginia M.-Y. Lee of the University of Pennsylvania published a study in which mice were injected with misfolded synthetic α-synuclein, a protein that forms aggregates called Lewy bodies in people with Parkinson’s. Six months later, the mice had problems with balance and motor skills, Lewy bodies in their brains, and damage to their dopamine-making nerve cells (C&EN, Nov. 19, page 38; Science, DOI: 10.1126/sci​ence.1227157). Taken together, these findings are making scientists wonder whether the hallmark proteins of Alzheimer’s and Parkinson’s might also transmit from person to person like prions, via procedures such as tissue implants or blood transfusions. Others see a silver lining in the research findings: They hope to find new drugs that block disease progression by interfering with misfolding pathways.