Drug developers should look to ancient texts for new leads, says a historian of medical manuscripts 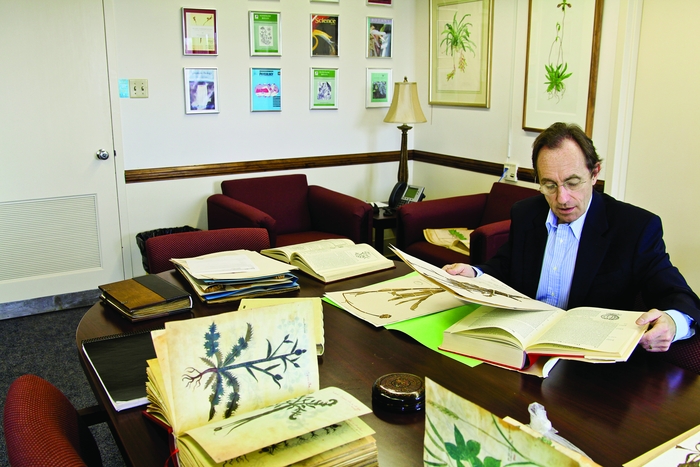 For decades scientists in search of new drugs have interviewed the world’s indigenous peoples to ask them about herbs and plants used in traditional medicines. Medical botany historian and language expert Alain Touwaide thinks those seeking new treatment ideas should consider another source: ancient medical manuscripts.

“Ancient cultures put a lot of energy, time, and money” toward recording, transmitting, and preserving their medical knowledge, Touwaide says. Why would they do so if the knowledge had no therapeutic efficacy whatsoever?

This is the question at the heart of the Institute for the Preservation of Medical Traditions, an organization Touwaide founded with his wife, Emanuela Appetiti, a cultural anthropologist. The institute is hosted by the Smithsonian’s National Museum for Natural History in Washington, D.C., where Touwaide works as a researcher in the museum’s botany department.

“We travel all around the world looking for ancient manuscripts, some of which haven’t been opened for centuries,” he tells C&EN from a small fifth-floor office bursting with books. He’s perused the shelves at well-known libraries, such as the Vatican Library in Rome and the British Library in London, but also some less well-known sites such as the Monastery of Korone in central Greece.

The goal is a worldwide census of Greek medical manuscripts, Touwaide says. To date, he’s accumulated data on roughly 1,000 medicinal plants from about 250 texts—information he’s compiling into a database. He consults texts from 800 B.C. through A.D. 1600, starting with the onset of Greek cultural dominance around the Mediterranean through the Middle Ages until the Renaissance, when doctors were still using remedies passed down from ancient Greek medical scholars such as Hippocrates and Galen.

Credit: Sarah Everts/C&EN
Ancient texts tout the use of spider silk as a wound dressing.

“Here’s an example of the kind of service we can give to the scientific community,” Touwaide says. He points out that broccoli is currently being investigated for components that may help colon cancer. Meanwhile, Touwaide says he’s found documents that describe the 2nd-century doctor Galen as “prescribing broccoli for something that is clearly a case of colon cancer.”

The mandrake plant provides another such example, Touwaide says. Its roots have been used since 4th-century B.C. for anesthesia, muscle paralysis, and pupil dilation. One of this plant’s alkaloids is atropine, which is still used for such purposes in some modern medicines.

Although he acknowledges that ancient civilizations faced far higher morbidity than we do today, Touwaide believes ancient medical texts contain tips that could bequeath modern remedies. And he is not alone. For example, a 2006 paper in Chemical Reviews entitled “Spider Silk: Ancient Ideas for New Biomaterials” called on chemists to evaluate possible wound healing and antibiotic properties of spider silk—and not just its mechanical strength—on the basis of ancient literature suggesting spider webs have medicinal properties (DOI: 10.1021/cr010194g).

BACK TO THE FUTURE
[+]Enlarge
Credit: Sarah Everts/C&EN
Mandrake root is a plant used since 4th-century B.C. for anesthesia, to paralyze muscles, and to dilate pupils. It contains atropine, an active ingredient in medicine today.

Credit: Sarah Everts/C&EN
Mandrake root is a plant used since 4th-century B.C. for anesthesia, to paralyze muscles, and to dilate pupils. It contains atropine, an active ingredient in medicine today.

Touwaide hails from a family of pharmacologists. But he initially pursued a classics degree, becoming proficient in both ancient Greek and Latin—he speaks a total of 12 languages. Over the course of his career, Touwaide’s family background and education became intertwined as he became fascinated with ancient Greece’s medical manuscripts and its primarily plant-based remedies.

Part of Touwaide’s job is to translate some of the cryptic ingredients referenced in medical texts. “So for example, dragon’s blood [in a recipe] has nothing to do with any dragon,” he says. The “dragon” is just a Dracaena cinnabari tree and “dragon’s blood” is the red resin of the tree, which has been used for centuries for everything from glue and lipstick to remedies for diarrhea and topical wounds.

CINNAMON STICKS
[+]Enlarge
Credit: Sarah Everts/C&EN
Ancient Greeks used cinnamon acquired from China in their medicine but they did not know what the plant looked like. They thus falsely depicted the plant source as trees heavy with cinnamon sticks.

Credit: Sarah Everts/C&EN
Ancient Greeks used cinnamon acquired from China in their medicine but they did not know what the plant looked like. They thus falsely depicted the plant source as trees heavy with cinnamon sticks.

Touwaide is not doing any follow-up scientific research himself, because he’s a medical historian not a scientist. But he’s open to collaboration. For example, he’s teamed up with Robert Fleischer, a geneticist at the Smithsonian’s Center for Conservation & Evolutionary Genetics, to analyze the plant components of 2,000-year-old pills that were pulled out of a Mediterranean shipwreck.

The gray-green tablets are the only existing examples of medicine from antiquity, Touwaide says. Recently, an Italian team of researchers analyzed the pills’ chemical components, which include zinc, a possible antibiotic ingredient. Touwaide and Fleischer are analyzing the DNA of the ancient pills’ plant components. Their preliminary results suggest the pills contain extracts from plants such as carrots, onions, hibiscus, and parsley.

These ordinary plants were used in remedies for digestive ailments and other medical treatments promoted by Hippocrates and his followers, Touwaide says. In Hippocrates’ writings, Touwaide has found mention of some 380 plants that are combined to make 5,500 remedies.

But he notes that half of these formulations are made of just 40 plants, many of which were common food flora.

Hippocrates is often quoted as saying, “Let food be thy medicine and medicine be thy food.” Touwaide says that Hippocrates meant this quite literally.

Art & Artifacts
Egyptian mummy gives up embalming secrets
Synthesis
Re-Creative Successes: Tales of ancient recipes being carried out in modern-day laboratories
Biological Chemistry
World War I Dysentery Bacterium Was Antibiotic Resistant Before The Antibiotic Age
Share X
To send an e-mail to multiple recipients, separate e-mail addresses with a comma, semicolon, or both.
Title: C&EN Talks With Alain Touwaide
Author: Sarah Everts
Chemical & Engineering News will not share your email address with any other person or company.