By now, Laura M. Barge has probably made more chemical gardens than even the most dedicated science teacher. But Barge, who goes by Laurie, is putting her own spin on classroom recipes for the twisted, plantlike growths. Her purpose is to show how naturally occurring structures that reside deep in the oceans and are reminiscent of her gardens might have powered the start of life on Earth.

Chemical gardens aren’t alive, but they are a lively showcase for the chemistry of precipitates. They form when metal salt crystals, such as iron chloride, make contact with water glass—a syrupy solution of sodium silicate—or other solutions containing certain anions. The twisted precipitates that sprout from the crystal are porous structures. The bulbs and chimneylike tubes rupture and re-form as the water that passes through them exerts pressure on them.

These types of precipitates also form in natural settings, says Barge, a California Institute of Technology postdoc based at the National Aeronautics & Space Administration’s Jet Propulsion Laboratory (JPL) in Pasadena, Calif. The settings most relevant to her work are hydrothermal vents, submarine springs where heat and reactions with components of Earth’s crust alter the composition of the water inside. When the ions in this hydrothermal vent fluid meet those in ocean water, the result is a precipitate on a massive scale, sometimes many stories high. 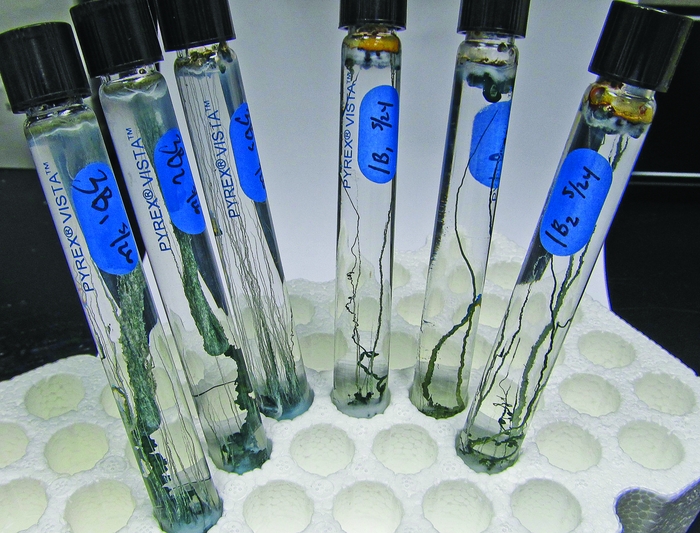 It is at vents where Barge’s work meets origin-of-life research. Her postdoctoral adviser, Michael J. Russell, has for decades advocated the school of thought that hydrothermal vents provided life’s primeval source of energy (Nature, DOI: 10.1038/459316a). It’s an idea that’s been criticized, because the high heat at most vents could degrade fledgling biomolecules. But the concept got a boost in 2000. That year, an expedition deep in the Atlantic Ocean uncovered a field of vents called the Lost City, which are much cooler than others.

Whether in vents or chemical gardens, chimney- and bulb-shaped precipitates can be interfaces between rather different environments. Lost City, for instance, is alkaline. If a vent like it existed in the ancient ocean, which was likely acidic, a gradient would have formed at the vent-ocean interface. Gradients are packed with potential energy, which Russell and Barge think could have powered the emergence of life.

In living things, gradients “are as conserved as the genetic code itself,” says William F. Martin of Germany’s Heinrich Heine University. Biology uses the flow of ions across a cell membrane to power production of adenosine triphosphate (ATP), its most versatile fuel, he says. Life requires a protein intermediary for that particular process, he says, but Lost City-like chemistry could’ve powered primordial additions of phosphate to certain small molecules (Cell, DOI: 10.1016/j.cell.2012.11.050).

Groups including Barge and Russell’s team have shown that chemical garden chimneys also maintain chemical gradients across them (Langmuir, DOI: 10.1021/la203727g; Angew. Chem. Int. Ed., DOI: 10.1002/ange.201107754). At a January origin-of-life conference at Princeton University, Barge talked about how she wants to go a step further.

So far, Barge explains, experiments have shown that steep differences in ion concentration can occur between the inside of a garden’s plantlike spires and the outside. What has not yet been demonstrated in a chemical garden, she says, is an electrical component—electrons passing from a chemical inside the garden’s structures to one outside. One example might be electrons flowing from hydrogen to reduce carbon dioxide to methane, Barge explains. If it were possible to couple such redox pairs with a chemical gradient for power, “now you’re talking about a battery—a battery that could’ve kick-started life,” Barge says. “I think we can build that battery.”

She’s starting with her chemical gardens. Getting electrons to flow through a chemical garden chimney should be feasible, she thinks. Researchers in Japan have generated an electrical current across a fragment of a real hydrothermal vent chimney (Angew. Chem. Int. Ed., DOI: 10.1002/anie.201003311).

Barge’s recipe for chemical gardens makes it easy to switch ingredients or test new ones. Instead of dropping a crystal into a solution, she uses a syringe pump to feed one solution—an iron(II)-rich solution representing the ancient ocean—into another, a phosphate- and silicate-laden solution representing hydrothermal vent fluid. The syringe pump approach has been used in a handful of prior studies, including some from Russell’s group (J. Am. Chem. Soc., DOI: 10.1021/ja0298343; Phil. Trans. R. Soc. A, DOI:

“Redox chemistry is what life is all about,” says Martin, who has regularly teamed up with Russell in the past. He’d like to see Barge reduce carbon with the chemical garden precipitates as catalysts, since that’s a process essential for life today. He advocates looking at examples from biology. For example, cells use a trick called electron bifurcation to reduce CO2 with H2. He proposes adding compounds like simple organic disulfides to the gardens that might allow the trick to happen there as well. 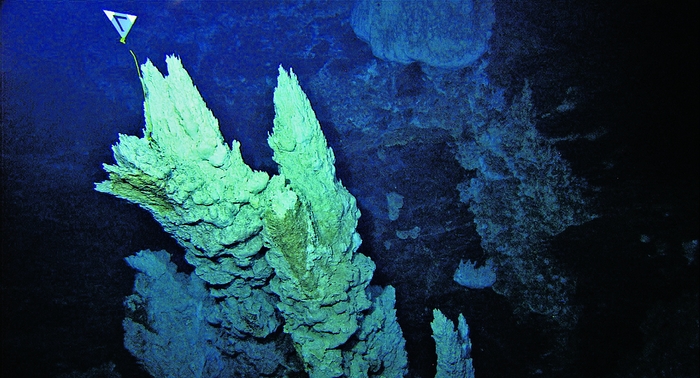 “Science is based on surviving hypotheses,” Russell says. So far, he believes the vents-as-batteries idea has survived, but it’s a tough concept to demonstrate in the laboratory. He praises Barge for not shying away from the challenge. “Plenty of people don’t want to shoot, just in case they miss.”

If Barge can get her battery working, she will in a way redeem another origin-of-life researcher who was inspired by chemical gardens 100 years ago. The late French biologist Stéphane Leduc thought that because chemical gardens’ structures could closely mimic living things, answers about life’s origins might be found there. That idea later fell out of favor. But Russell is quick to quote snippets of “The Mechanism of Life,” a 1911 book of Leduc’s that he says remains relevant today: “The chain of life is ... a continuous one, from the mineral at one end to the most complicated organism at the other.”