Neuroscience: A technique called Clarity that can render dissected brain tissue transparent could be a boon to neuroscientists trying to see and diagram brain circuitry

After more than a century of study, neuroscientists have yet to unlock the secrets of how people learn and form thoughts. Some researchers think having a “connectome,” or brain wiring diagram showing how the billions of neurons there interface, will help solve the mystery.

But to assemble this diagram, researchers have had to image the brain one ultrathin slice at a time. They painstakingly add series of images together to eventually render a three-dimensional picture of brain circuitry.

A chemical method that makes brain tissue transparent could revolutionize this process by enabling researchers to see inside the brain without carving it up. A research team led by Karl Deisseroth of Stanford University developed the patented Clarity method, for converting brain tissue into a clear hydrogel (Nature, DOI: 10.1038/nature12107).

Deisseroth’s research team infuses brain tissue with acrylamide monomers, formaldehyde, and a heat- activated initiator compound for a few days. They next warm the refrigerated tissue to initiate polymerization, forming a hydrogel mesh that anchors structures such as neurons in place. An electric field and negatively charged detergent are then used to extract the lipids that make the tissue visually impenetrable.

That final step, dubbed “electrophoretic tissue clearing” by the team, was the most challenging to develop, says Kwanghun Chung, a Stanford postdoctoral researcher and lead author of the report. “We melted and burned hundreds of mouse brains before we figured out the optimum conditions, such as voltage level.”

Eventually, the Stanford team immunostained blocks of both a mouse brain and a brain from a deceased autistic patient with fluorescent antibodies of different colors to generate 3-D rainbow maps of brain features.

“We can’t really understand how the brain works without knowing the connectivity of its neurons,” Chung says. “It’s like having a supercomputer and not having a blueprint of the circuit board.”

But just as important as Clarity’s ability to make tis- sue transparent is its ability to make tissue somewhat permeable, comments Qingming Luo, a biomedical engineer and vice president of China’s Huazhong University of Science & Technology. The extracted lipids leave behind pores in the hydrogel mesh so the tissue can absorb fluorescent antibody stains targeted at different proteins and cells. “This makes it possible to colabel molecular and structural features in the same brain,” Luo says.

[+]Enlarge
Credit: Nature
Yellow fluorescent protein lights up neuronal structures on the underside of a mouse brain treated with Clarity. 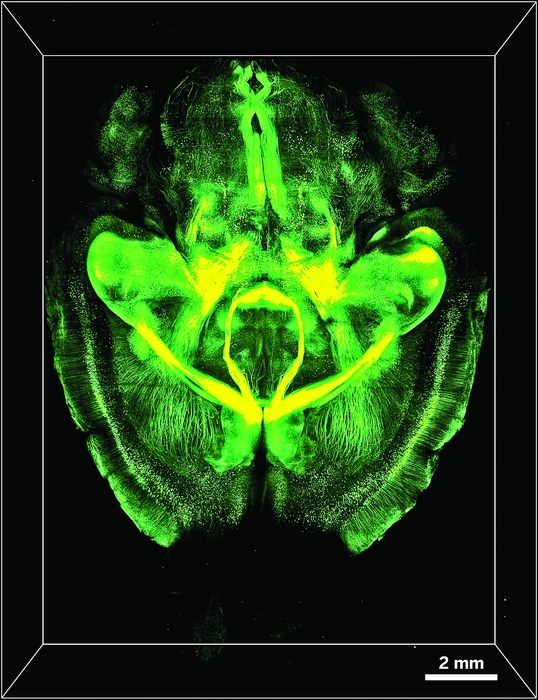 Credit: Nature
Yellow fluorescent protein lights up neuronal structures on the underside of a mouse brain treated with Clarity.
[+]Enlarge
Credit: Nature
A quote by famed neuroscientist Santiago Ramón y Cajal becomes visible after a mouse brain (left) is made transparent (right) by the Clarity technique. 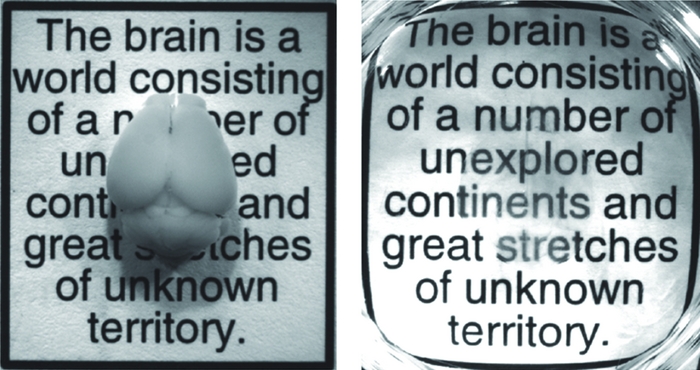 Credit: Nature
A quote by famed neuroscientist Santiago Ramón y Cajal becomes visible after a mouse brain (left) is made transparent (right) by the Clarity technique.
[+]Enlarge
Credit: Nature
Fluorescent proteins and antibody stains produce a rainbow map of neuronal (red and green) and other cellular structures (blue) in a mouse’s hippocampus. 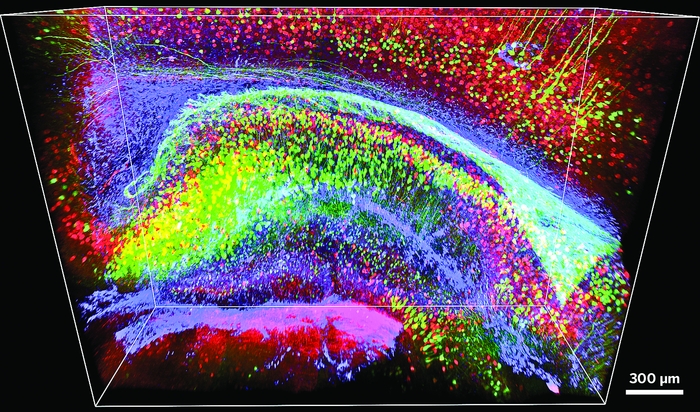 Credit: Nature
Fluorescent proteins and antibody stains produce a rainbow map of neuronal (red and green) and other cellular structures (blue) in a mouse’s hippocampus.

Deisseroth’s team hopes to license Clarity in the future. But detailed instructions for using it are included in the Nature paper, Chung says, “so any lab can set up its own system.”

My name is Wasym Mando, a student at the Eye Research Institute of Oakland University in Rochester Hills Michigan. I am studying the disease process and biochemical pathway in a glaucoma model and found that your Clarity procedure may serve me well in my studies. I have located and utilized the Clarity Procedure available online however I have ran into some issues that I thought you may be able to clarify for me. I have followed the procedure verbatim as it is stated and everything but the one problem that I have ran into is that when I go to circulate the clearing solution while conducting the electrophoresis portion of the experiment my power pack indicates an error that coincides with a high buffer concentration and thus shuts off the current to the chamber. I would really appreciate the help. I do not know whether or not the buffer recipe provided online is correct or whether you have any advice as to why such things are occurring. If you could contact me back via email or phone number it would be greatly appreciated. If you have any suggestions or insight on this problem that I am facing please let me know as well.

Thank you for your time
Reply »