Chemical Ecology: How Asian ladybugs destroy competitors with pathogens and use small molecules to protect themselves

ENTICING ODORS
[+]Enlarge
Credit: PLoS ONE
Aphids release volatile molecules such as (E)-β-farnesene and 2-methylbutanoic acid that help predators such as ladybugs zone in on the insects. 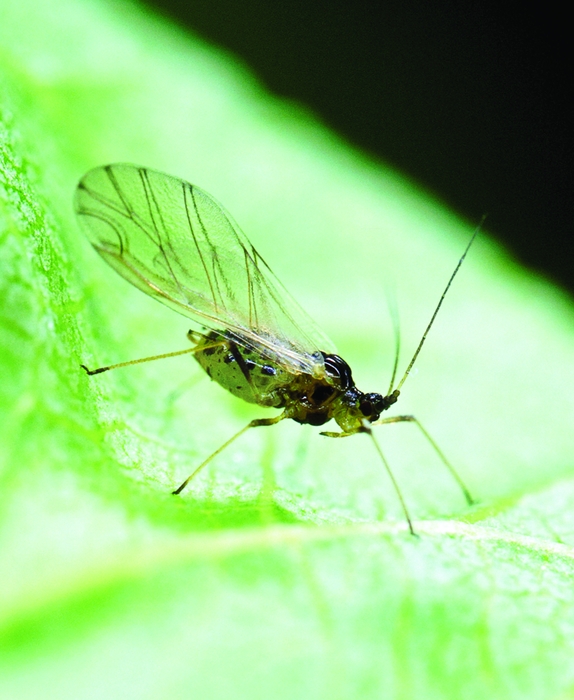 Credit: PLoS ONE
Aphids release volatile molecules such as (E)-β-farnesene and 2-methylbutanoic acid that help predators such as ladybugs zone in on the insects.

If you live in the U.S. or Europe and ladybugs lurked inside your house last winter, loitering on your windowsills or walls through the cold season, they were probably members of an invasive species from Asia. 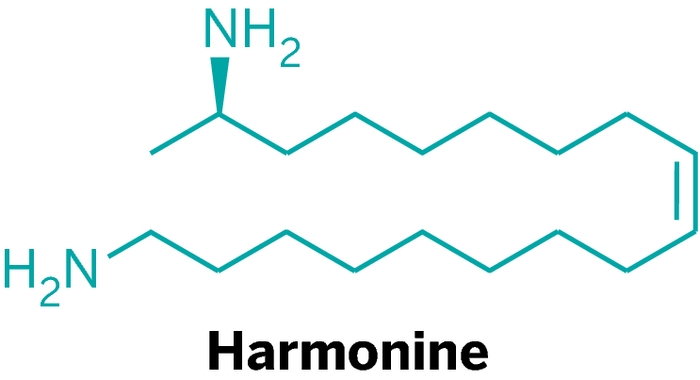 Asian harlequin ladybugs, or Harmonia axyridis, occupy human homes during the chilly weather, says François J. Verheggen, a chemical ecologist at the University of Liège in Belgium. There they produce stinky secretions that can sometimes trigger allergic reactions or breathing problems in human cohabitants.

But the invasive insects are much more of a menace to endemic Western ladybugs. That’s because Asian ladybugs host a microbial parasite that is devastating native species, explains Andreas Vilcin­skas, a chemical ecologist at Justus Liebig University, in Giessen, Germany. He’s leading a research team that recently showed that Asian ladybugs can keep the parasitic pathogen in check when it is in their own bodies. But the parasite, a protozoan called Nosema thompsoni, is a potent biological weapon that can wipe out competitors (Science 2013, DOI: 10.1126/science.1234032).

The Asian ladybugs likely survive the parasitic protozoan because they produce a potpourri of anti­microbial peptides as well as a huge amount of another small antimicrobial molecule called harmonine. Because endemic ladybugs don’t produce these molecules, they fall victim to the pathogen.

When harmonine was initially discovered in the invasive species, researchers noted that it protects Asian ladybugs from hungry predators because the molecule doesn’t taste good. So native ladybugs, birds, or other species that might keep Asian ladybug populations under control avoid the foul-flavored insect.

The molecule tastes bad to human palates too, Vilcinskas tells C&EN. This is becoming a problem because the Asian invaders have a predilection for eating wine grapes in France and Spain. When the invasive insects slip into the wine-making process, the unpleasant-tasting harmonine spoils the taste of wines, Verheggen says.

Meanwhile, harmonine was found to be more than just a nasty-tasting defense molecule. Last year, Vilcinskas reported that the small molecule, which he had isolated from the Asian ladybug, also has antimicrobial activity against the causative agents of both malaria and tuberculosis (Biol. Lett. 2012, DOI: 10.1098/rsbl.2011.0760). The serendipitous discovery showed that studying the Asian ladybug won’t just help researchers save indigenous ladybug populations among other agriculture applications, but may also help fight human pathogens. Asian ladybugs didn’t sneak over to the U.S. and Europe accidentally. They were introduced intentionally in the early-20th century as a way to control aphid populations on both sides of the Atlantic, Verheggen says.

Aphids are a major crop pest. The U.S. Department of Agriculture notes that aphids damage plants by munching on them, help spread viral pathogens to plants, and often regurgitate onto plant leaves a fluid called honeydew that causes harmful fungi to grow. 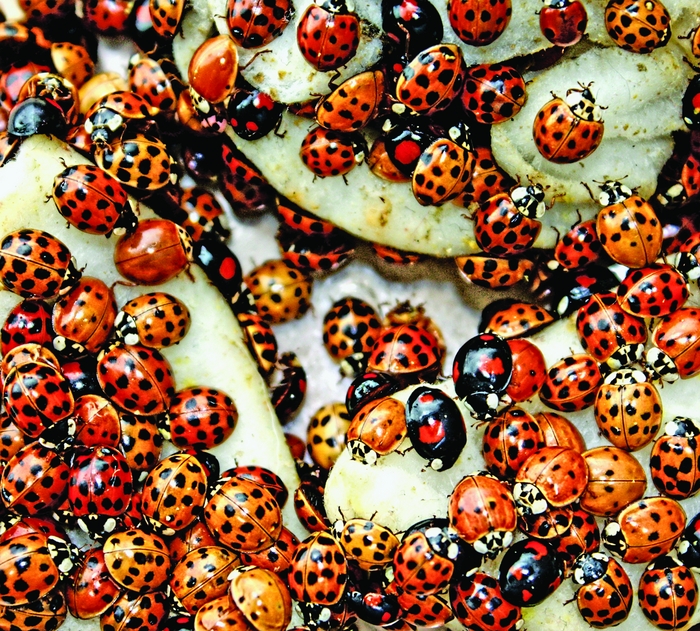 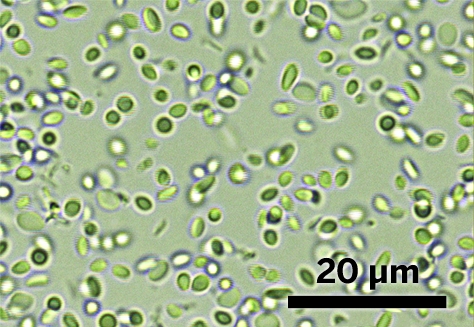 PRETTY PERILOUS
These invasive harlequin ladybugs from Asia carry a pathogenic protozoan parasite (inset) that kills endemic ladybugs in the U.S. and Europe. The Asian ladybugs probably can resist the parasite because the bugs produce the antimicrobial compound harmonine.

Although native ladybugs eat aphids, Asian ladybugs are larger than most native species and are much more voracious aphid eaters, each consuming up to 200 insects per day, Vilcinskas says. When the Asian bugs consume all the aphids in sight, they start looking for other food, such as grapes or even the larva or eggs of native ladybugs. “It’s much less likely that native [ladybug] species consume harlequin eggs or their larva,” Verheggen says.

The invasive ladybugs have “a really efficient searching behavior, particularly at long distances, which helps them find aphids,” Verheggen adds. For example, he’s discovered that Asian ladybugs can sense an aphid fear pheromone called (E)-β-farnesene, which helps them home in on their prey. He’s also found evidence that Asian bugs (and other aphid predators) can use volatile molecules wafting off aphid honeydew, such as 2-methylbutanoic acid and 3-methyl-2-butenal, to locate the insects.

Curiously, these two volatiles wafting off the honeydew are not produced by the aphids themselves but by an aphid’s symbiotic gut microorganism Staphylococcus sciuri (Nat. Commun. 2011, DOI: 10.1038/ncomms1347). It was the first example of a host-associated bacterium producing a volatile molecule that reveals the location of its host to its host’s prey.

In addition to their interest in revealing such a curious ecological ménage à trois, chemical ecologists such as Verheggen are interested in exploiting the volatiles produced by aphids and sensed by the ladybugs to control ladybug populations. One idea is to use the molecules to attract ladybugs to aphid-infested fields as a help to farmers. Another idea is to trap invasive ladybugs or attract them away from crops like grapes.

More fundamentally, researchers working on ladybugs want to understand an as-yet-unexplained mystery: Even though the Asian ladybugs were introduced many decades ago, it was only around the beginning of the 21st century that their populations began to grow out of control and to trigger concern among ecologists that endemic species would be overwhelmed, Verheggen says.

While researchers try to solve this conundrum, the discovery that Asian ladybugs are carrying around a biological weapon that is destroying native populations has proven a hypothesis about invasive species that’s been circulating for about a decade. The theory is based on the idea “that invasive species should invest more in their immune systems than noninvasive species, because in newly colonized habitats the invaders must resist parasites to which they are not preadapted,” notes the University of Bath’s Stuart E. Reynolds in a Science commentary (2013, DOI: 10.1126/science.1238998).

The fact that Asian ladybugs produce harmonine in great quantities allows them to resist lethal protozoa they may have inside them. It also likely keeps their immune system on standby for any pathogens they encounter for the first time in the U.S. and Europe.

It’s a devastating weapon against indigenous ladybugs. But if Vilcinskas’ team can modify harmonine into a drug that kills the tuberculosis and malaria pathogens in humans, at least one positive outcome will emerge from the otherwise problematic ascension of the Asian ladybug abroad.

Share X
To send an e-mail to multiple recipients, separate e-mail addresses with a comma, semicolon, or both.
Title: Invading Ladybugs Carry Bioweapons
Author: Sarah Everts
Chemical & Engineering News will not share your email address with any other person or company.

Comments
John Skinner (August 20, 2013 11:01 AM)
With two free amino groups per molecule, harmonine would appear to be quite a basic compound and,consequently, capable of forming salts with (neutralizing) volatile carboxylic acids, such as the 2-methylbutanoic acid, acting as pheromones. Maybe such a reaction could either promote or interfere with the pheromone-sensing effect on the ladybugs and, possibly, have implications for anti-microbial activity.
Reply »

Tushar Mukherjee (October 29, 2013 11:37 AM)
I have photograph of a probable mixosporidia in the accessory salivary gland of plant sap sucker hemiptera. I wish to get the protozoa identified.
Reply »

Mike T. McClure (July 8, 2015 12:39 PM)
A Petroleum Engineer, I frequently travel to remote locations. I stayed in a motel infested with Asian ladybugs for about a month when I contracted a bacterial infection that settled in my hip joint that had been surgically replaced just months before. I had to take leave of my job, have had over $20,000 out of pocket expenses and just endured 6 weeks of intravenous antibiotics Vancomycin and Heparin. Can you refer me to data that would indicate a correlation of bacterial infection in humans and Asian ladybugs?
Reply »