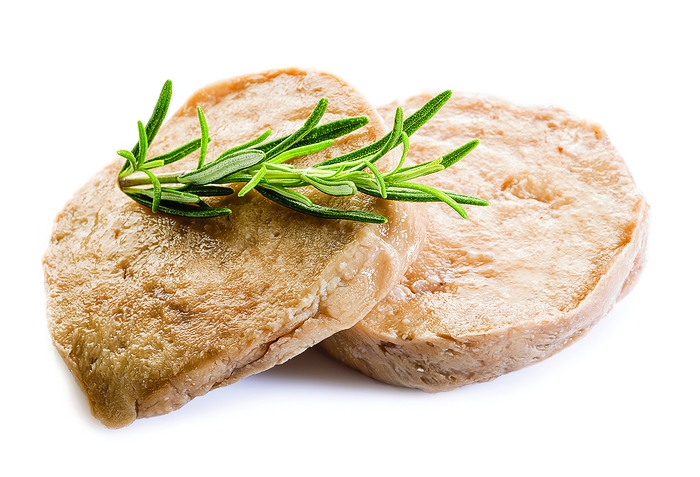 Credit: Shutterstock
Seitan can replace poultry or other meat.

Wheat meat, fu, mock duck, and wheat gluten: These are all names for the vegetarian meat substitute commonly called seitan in the U.S. Seitan’s texture can be made so similar to that of chicken that some who shun meat find it disturbing. The popular meat alternative is made from wheat’s main protein component, gluten.

Seitan (pronounced sā-tan) originated in Asia. According to one story, several hundred years ago a Chinese emperor became a Buddhist and stopped eating meat, says Nicole Sopko, vice president of Chicago-based seitan maker Upton’s Naturals. “But he still wanted some of the textures of the foods he had been eating, so seitan was created.”

MEAT
[+]Enlarge
Credit: Steve Farias/Johns Hopkins U
The fibrous structure of chicken is difficult to replicate. 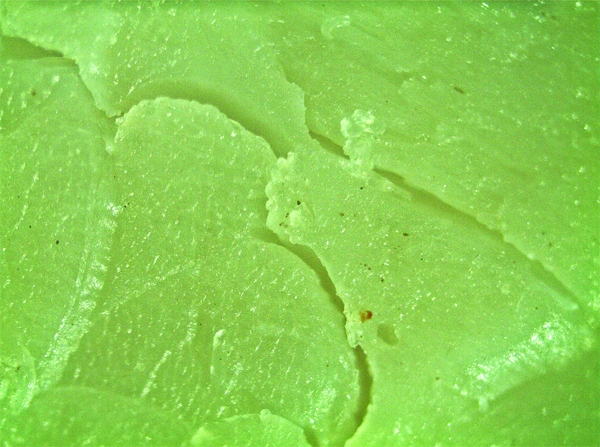 Credit: Steve Farias/Johns Hopkins U
The fibrous structure of chicken is difficult to replicate.

Whether made at home or by a commercial operation, the basic process for making seitan is the same. A dough of wheat flour, yeast, and water is mixed up, kneaded, and left to rest for a short time. Then the dough is massaged in a large volume of water. Starches and other water-soluble components of the dough leach into the water, leaving behind a glutenous protein mass.

Sometimes flour with most or all of the starches removed is sold in supermarkets as a product called vital wheat gluten. It is primarily used as an additive in baking to improve the texture and elasticity of dough, but it is often used as starting material for homemade seitan. 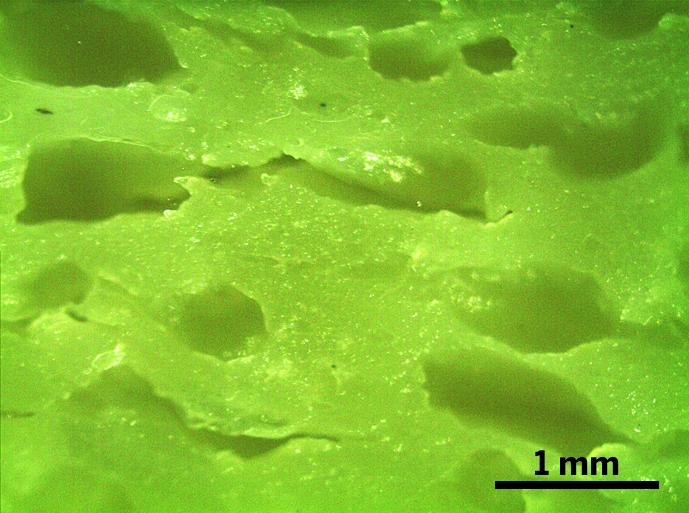 Online forums for meat-free cooking are full of questions from people looking for tips on how to give homemade seitan a pleasant mouthfeel. But although a frequent goal is to mimic the taste and texture of chicken, many do-it-yourself attempts resemble a loofah bath sponge instead. Sopko declined to discuss the methods used at Upton’s to produce its seitan; the details of the mixing and cooking techniques make the difference in its texture, and texture is the name of the game.

Washington, D.C.-based science communicator and molecular biologist Adam Ruben has dug through the primary literature on gluten and seitan for clues on how to achieve a palatable texture. 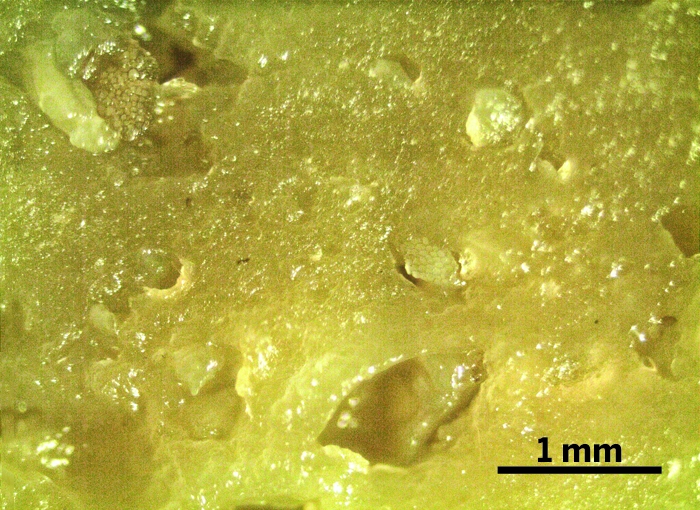 He explains that gluten, and therefore seitan, is a suspension of two types of water-insoluble proteins, gliadins and glutenins. Gliadin proteins are relatively small, around 40,000 dalton, whereas glutenins are 10 to 100 times as large, Ruben says. During the mixing process, cysteine residues on the glutenins form disulfide bonds between individual protein units, and this results in a disorganized cross-linked aggregate. The smaller gliadins don’t form similar intermolecular bonds but instead are trapped in the glutenin matrix.

Water retention and tensile strength in seitan are pH dependent, so acids or bases in the mixing or cooking liquids, such as vinegar or baking soda, respectively, provide a way to manipulate the texture (J. Agric. Food Chem. 1993, DOI: 10.1021/jf00035a006).

In addition to the chemistry involved in making seitan, physical manipulation such as stretching it in one direction and compressing it in another during cooking might provide a fibrous structure that mimics meat (Cereal Chem.1991,68, 492).

This boldly named do-it-yourself seitan recipe is famous in the vegan community. Countless variations appear on a multitude of Internet forums.

Add the liquid ingredients to the dry ingredients. Mix well, then knead for a minute or two … it doesn’t need long.

Form into a log (6–8 inches long); wrap tightly in foil, twisting ends. Bake for 90 minutes. When done baking, unwrap and leave out to cool all the way. Then wrap it in foil or plastic and refrigerate. Slice to use as desired.

But some people avoid gluten as passionately as vegetarians shun meat. Gluten has gotten a bad rap recently as a result of an increase in diagnosed cases of celiac disease and gluten sensitivity. In celiac disease, gliadins trigger an autoimmune response that damages the villi in the small intestine. The fingerlike villi are responsible for nutrient absorption in that portion of the digestive tract, so the disease is often marked by intestinal pain, anemia, and fatigue. Celiac is a genetically linked condition and can be diagnosed with blood tests.

But for the roughly 95% of people whose bodies can process gluten normally, “gluten is a safe and healthy protein source for those without celiac disease or gluten sensitivity,” says Pam Cureton, a CCRT dietician.

For the majority of us who can eat gluten safely, seitan is relatively nutritious. It’s high in protein and low in fat, although some commercially made seitan is high in sodium. “If you’re somebody who feels the need to eat meat all the time, seitan would be a good way to replace some of the red meat in your diet,” Ruben says.

Natural Products
What’s gluten-reduced beer, and can celiac patients drink it?
Environment
Unwelcome Fat Blooms On Chocolate
Analytical Chemistry
Assay Detects Minuscule Amounts Of Gluten In Food
Share X
To send an e-mail to multiple recipients, separate e-mail addresses with a comma, semicolon, or both.
Title: Seitan
Author: Craig Bettenhausen
Chemical & Engineering News will not share your email address with any other person or company.

Comments
a celiac patient, ACS member (June 10, 2013 9:24 AM)
This extremely dangerous news for people with gluten-intolerance. Suffice to say that it's painful reading small and smaller print of ingredients, now one also has to learn japanese and chinese expressions for wheat derived products that may not even contain wheat as an ingredient. Scary thought!!!!!
Reply »

Bob Buntrock (July 19, 2013 10:02 AM)
This made me curious about the amino acid makeup of gluten and wheat proteins. I really had to dig but finally found an article that described lysine as the limiting amino acid in host cereal grains. This is the reason that a vegetarian diet should include legumes as well as grains. Beans and tortillas as well as hummus and pita are exemplary. As a matte of interest, buckwheat is relatively high in lysine but since buckwheat is not a cereal grain (it's a dicot) this is not that surprising.
Reply »

Jade (March 23, 2016 11:16 AM)
I was led to this article because I am interested in discovering the science of cooking seitan; specifically I am looking at the effects of boiling it in vinegar.

One of the largest problems with vegan cuisine, in my opinion, is that there are not a lot of consumer-ready resources that discuss the science of cooking vegan food. As with meat, it is simple to discover the science and reason behind their techniques. With seitan, for example, I know why to cook but not the why. This leads me to fear exploring in new territories. Wheat gluten appears to be such a temperamental ingredient.

If anyone can lead me into a direction of culinary science for vegans please contact me!
Reply »