Biotechnology: Naturally occurring genes can’t be owned, but synthetic gene material can be

[+]Enlarge
Credit: Newscom
While the justices deliberated over the Myriad Genetics case, protesters gathered outside the Supreme Court to state their opposition to gene patenting. 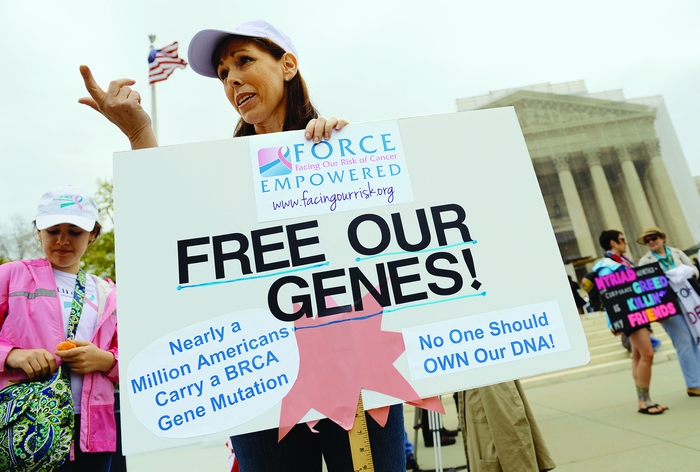 Credit: Newscom
While the justices deliberated over the Myriad Genetics case, protesters gathered outside the Supreme Court to state their opposition to gene patenting.

Genes found naturally in the human body cannot be patented, the Supreme Court ruled in a unanimous decision last week. However, the justices found that a synthetically created genetic material, called cDNA, is eligible for patent protection.

The justices handed a partial loss to Salt Lake City-based Myriad Genetics, a biotech firm that held patents on two isolated genes—BRCA1 and BRCA2. Those genes can indicate a higher risk of breast and ovarian cancers. The company markets the only diagnostic test available for detecting the presence of those genes. Plaintiffs argued the patents discouraged some research into the diseases and let Myriad control genetic testing.

“The court struck down a major barrier to patient care and medical innovation,” says Sandra S. Park of the American Civil Liberties Union (ACLU) Women’s Rights Project. “Myriad did not invent the BRCA genes and should not control them. Because of this ruling, patients will have greater access to genetic testing and scientists can engage in research on these genes without fear of being sued.”

Indeed, Quest Diagnostics, the nationwide chain of medical diagnostic labs, says it intends to validate and offer a BRCA1 and BRCA2 test service later this year. “As the leader in women’s health and cancer diagnostics, we are very interested in offering a BRCA testing service,” says Wendy H. Bost, a company spokeswoman. And the University of Washington—one of whose scientists, Mary-Claire King, led the effort that discovered BRCA1— says it will include testing for the genes in the clinical services offered to patients at its hospitals.

The biotech industry had warned that a ruling against Myriad could jeopardize billions of dollars in investment. The U.S. Patent & Trademark Office has already granted patents on about 4,000 human genes, mostly to companies and universities. The case challenged seven Myriad patents that are set to expire in 2015.

A naturally occurring piece of DNA is “a product of nature and not patent eligible merely because it has been isolated,” Justice Clarence Thomas wrote for the court. “Myriad did not create anything” with isolated DNA. “It found an important and useful gene, but separating that gene from its surrounding genetic material is not an act of invention.”

The court did uphold Myriad’s patent claims on cDNA. This synthetic complementary DNA, Thomas noted, can be patented because it requires a significant amount of human manipulation to create. “The lab technician unquestionably creates something new when cDNA is made,” he wrote.

Myriad says it still has more than 500 valid and enforceable claims in 24 different patents conferring “strong patent protection” for its diagnostic test.

The case arose when a group of doctors, patients, and medical researchers represented by the ACLU filed suit in 2009, saying human genes, including synthetically produced material, should not be patented.

The ruling potentially breaks Myriad’s monopoly on BRCA testing, “but how much or how serious a break will be determined by what else Myriad has patented,” says Kendrew H. Colton, a patent attorney at Fitch, Even, Tabin & Flannery, an intellectual property law firm.

Kenneth G. Schuler, a patent attorney at Latham & Watkins, says the court was careful to note that it was not deciding method claims.

“While the ruling reinforces the law of nature restriction on patentability, it leaves open various pathways for biotech companies—both in terms of methods of use and cDNA and, perhaps more generally, in applying the knowledge gained as a result of isolating particular genes,” Schuler says.