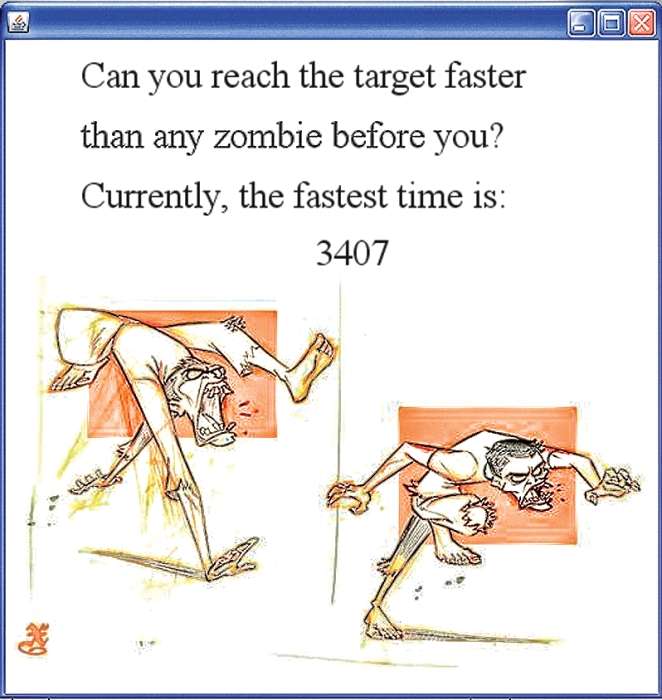 Imagine you are a zombie trapped inside a building with dozens of your fellow infectees. How would you fight your way out?

That’s just the scenario two mathematicians from England’s University of Essex presented to visitors at the Science Museum of London earlier this year as part of the museum’s ZombieLab event. But Nikolai W. F. Bode and Edward A. Codling weren’t really interested in zombie behavior.

“The idea behind this is serious science,” Bode tells Newscripts.

What the pair wanted was insight into how people evacuate buildings in an emergency. And the museum’s zombie extravaganza gave them the chance to test their evacuation simulation without tipping players off to the real purpose.

Although the 185 volunteer players might have been expecting the gruesome antics of a zombie video game, the reality of the simulation was tamer.

From a bird’s-eye view, each player was first asked to guide a virtual zombie from a building’s entrance to a central room filled with other zombies. Then the players had to help their zombie escape the crowded building by using one of two exit routes: the way they entered or a second, almost identical exit. Bode and Codling told some volunteers it was a race and others to go at their own pace.

The researchers were surprised to see that those players not racing were equally likely to steer their zombie toward either exit. But that isn’t what people do in real emergencies, Bode says, adding that a panicked person is more likely to use a familiar route.

In the timed trials, though, participants were under more pressure. The extra urgency made them more likely to take zombies out by the route they used when entering the building, which often meant waiting in an exit line—as if being a zombie isn’t bad enough without having to stand in an endless queue.

Women and older players fled more slowly, Bode says, but that could be related to inexperience with video games rather than to any particular hesitancy to evacuate in a real-life scenario.

Interestingly, the players didn’t have an explanation for why they chose to go the direction they did, Bode continues. “People just do things sometimes. In an emergency, it’s worth it to take a moment to think about what’s going on.”

Allergies can make even the most human of us feel like a zombie. And that tendency might come from your genes, according to a new study from personal genetics company 23andMe and the Avon Longitudinal Study of Parents & Children.

[+]Enlarge
Credit: Shutterstock
Family sneeze: Genetics might be behind your reaction to Mr. Fluffs-a-lot. 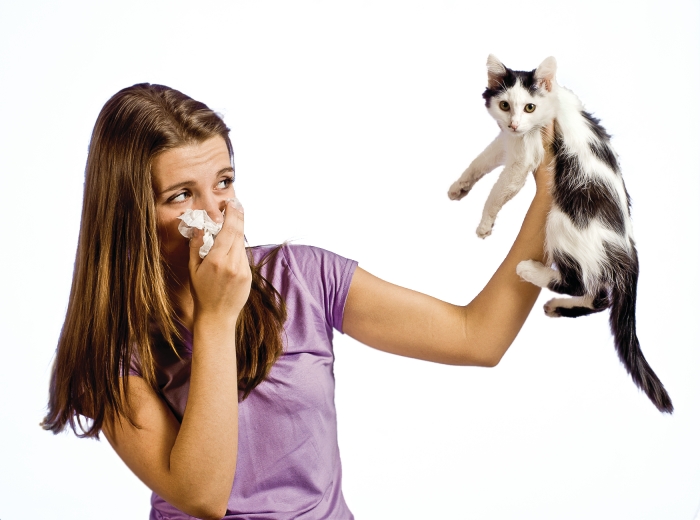 Credit: Shutterstock
Family sneeze: Genetics might be behind your reaction to Mr. Fluffs-a-lot.

The genomewide association study, published in June in Nature Genetics (2013, DOI: 10.1038/ng.2686), looked at allergies self-reported by more than 53,000 people. The data came from both 23andMe users, who submit their DNA via swab to the company to learn more about their ancestry and inherited traits, and from participants in the Avon study. The researchers identified 16 new genetic associations that might make a person more susceptible to common allergies, including pollen, dust mites, and cats. Eight of those genes were previously associated with asthma.

“Although environmental factors certainly play a role, our study reinforces the genetic link between common allergens and a person’s susceptibility to experiencing an allergic reaction,” says David A. Hinds, the paper’s first author and a scientist at 23andMe.

No genes were found that might make a person more susceptible to a zombie-inducing virus, however.

Infectious disease
Recent studies show no link between COVID-19 severity and blood group
The clever, conscientious readers of Newscripts weigh in
Biological Chemistry
A mother’s immune system could influence sons’ sexual orientation
Share X
To send an e-mail to multiple recipients, separate e-mail addresses with a comma, semicolon, or both.
Title: Escape Like A Zombie, Genetic Allergy Attack
Author: Andrea Widener
Chemical & Engineering News will not share your email address with any other person or company.