Structure Of Folic Acid Bound To Folate Receptor Is Solved

Scientists finally have a structure for the folate receptor. The receptor plays a key role in cancer, and the work could lead to better ways to design anticancer medications.

Credit: Nature
Folic acid (stick structure) protrudes from a deep binding pocket in the folate receptor. The colors represent the charge distribution of the receptor, ranging from negative (red) to positive (blue).

“The folate community has been waiting for decades for a published structure,” says Richard H. Finnell, a folate expert and professor in the department of nutritional sciences and the department of chemistry and biochemistry at the University of Texas, Austin. But a structure has been difficult to obtain because the protein was tough to crystallize.

A team led by Karsten Melcher, head of the Laboratory of Structural Biology & Biochemistry, and H. Eric Xu, head of the Laboratory of Structural Sciences at Van Andel Research Institute, in Grand Rapids, Mich., has solved this problem by removing sugar groups and the protein’s carboxy-terminal anchor. The result is a 2.8-Å-resolution crystal structure of folic acid bound to the human folate receptor (Nature 2013, DOI: 10.1038/nature12327).

Folates, a type of B vitamin, are involved in purine synthesis. Most cells get the folate they need via an anion channel called the reduced folate carrier, which has a low affinity for folate. So “there’s very little or no expression of folate receptors in most normal cells,” Melcher says. But cells that need lots of folate, such as cancer cells and cells involved in embryonic development, use the high-affinity folate receptor instead. Thus folate receptors are highly expressed in cancer cells, he notes. 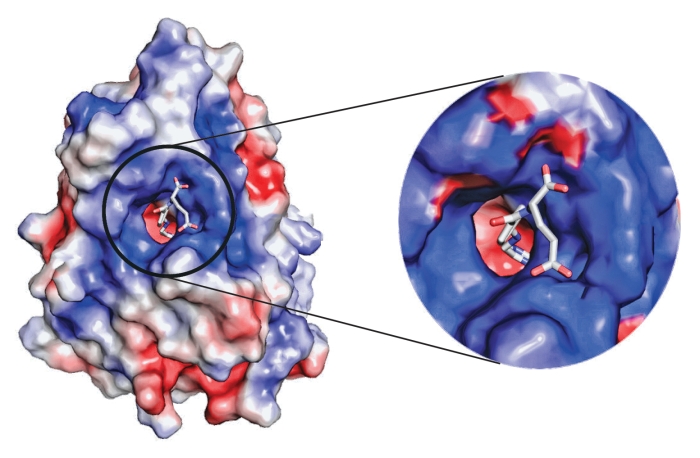 Credit: Nature
A side view of folic acid in the folate receptor’s binding pocket, showing the negatively charged pocket (red), the positively charged entrance (blue), and other receptor regions (black).

The structure helps explain in detail how such agents work. Folate includes a bicyclic pterin head group, aminobenzoate, and glutamate. The glutamate is where cargo has been attached to folate for targeting, and the structure now shows that glutamate sticks out of the receptor’s binding pocket, explaining why cargoes attached to that group don’t interfere with binding.

Antifolates, molecules that are similar to folate but can’t be metabolized in the same way, have been used as cancer drugs for decades. Methotrexate, introduced in the 1950s, is still used today. However, cells take up methotrexate through the reduced folate carrier, which is expressed in normal cells, accounting for methotrexate’s significant side effects.

The new structure shows why methotrexate is a poor binder for the folate receptor. “We can see that there’s a steric clash of a specific amino group that interferes with binding,” Melcher says.

Such drugs were developed by trial and error, without knowledge of how folate interacts with its receptor. “Our long-term plan is to take advantage of this structure to develop antifolates for chemotherapy that have much higher specificity than antifolates currently in the clinic,” Melcher says.

The structure “provides much-needed molecular-level understanding relevant to designing folate conjugates for targeted delivery,” says Robert J. Lee, a professor of pharmaceutics at Ohio State University. “This is exciting because the investigational drug vintafolide, which is a conjugate of folic acid, is now in a Phase III clinical trial.” Merck & Co. licensed vintafolide last year from the biotech company Endocyte, in West Lafayette, Ind.

Although its most immediate implications are for cancer therapies, the structure should also prove useful to researchers interested in the role of folic acid during embryonic development and in birth defects, Finnell says. The structure opens a door to make more sensitive assays and analyze the way antibodies bind to the folate receptor, he says.

Comments
Madhusudan Ghosh (August 20, 2013 8:51 AM)
Discovery of this structure will surely help to develop anti-folates for chemotherapy because the molecular-level understanding relevant to design folate conjugates for targeted delivery has now become more specific.

Over 60% population of the world are suffering from MTHFR Polymorphism still the medical practitioners prescribe Folic Acid at-random. Discovery of this structure should will help to prove researchers interested in the role of folic acid during embryonic development and in birth defects as the structure opens a door to make more sensitive assays and analyze the way antibodies bind to the folate receptor

Mary (February 10, 2015 10:05 PM)
Good comment Madhusuhan - this is exciting science. There is a lab, Iliad Neurosciences in Pennsylvania that tests for antibodies to the folate receptor - hopefully the science will continue to develop therapeutics along those lines.
Reply »

nayandip rajput (January 24, 2014 1:11 AM)
I have a question that how folic acid binds to receptor means which functional group of folic acid is responcible for binding that is terminal NH2 or caboxyl
Reply »