The Dubious Allure Of Probiotics

BIG BUSINESS
[+]Enlarge
Credit: Britt Erickson/C&EN
The market for probiotics is growing despite a dearth of information about what they do and what is in them. 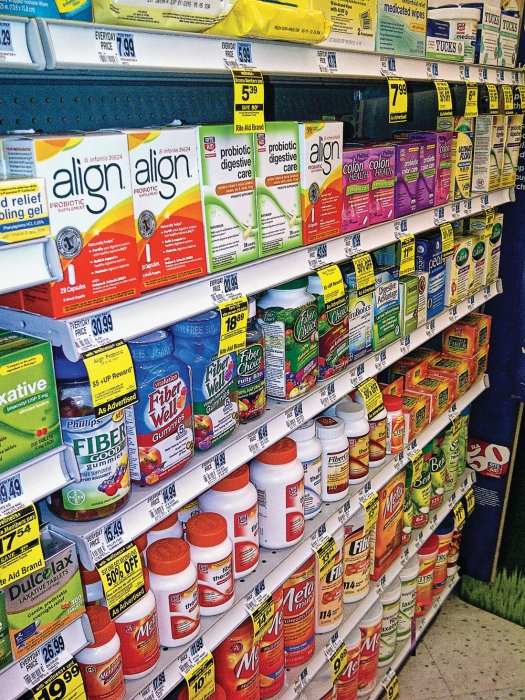 Credit: Britt Erickson/C&EN
The market for probiotics is growing despite a dearth of information about what they do and what is in them.

Pills, powders, gummies, and dairy products that contain “good” bacteria thought to aid digestion have been taking up increasingly more shelf space in drug and grocery stores. The global market for these so-called probiotic foods and supplements is estimated at $32 billion today, and analysts expect it to grow to $45 billion by 2018.

Manufacturers market probiotics with claims such as “helps maintain beneficial flora” and “helps regulate your digestive system.” But exactly what is in these products is an open question, as is how they work. Manufacturers are not required to list the strains of bacteria in their probiotics or indicate how much of each is in a product.

In the U.S., probiotics fall into the regulatory category of foods or dietary supplements, so the Food & Drug Administration has little regulatory authority over them. Little is currently known about what the bacteria do once they are consumed—whether they survive in the gut, and if they do, how long they survive, what chemicals they produce, or what effects they have on human health. Yet consumers are self-dosing in pursuit of relief from chronic conditions or generally better health.

As consumer interest in probiotics is growing, researchers’ interest in the human microbiome is growing as well. Scientists are beginning to unravel the intricacies of the microbiome—the microbial communities found at various sites on the human body, including the nose, mouth, skin, gastrointestinal tract, and urogenital tract. Interest in manipulating these microbial communities to improve human health is exploding. But at the same time, the lack of understanding about the interactions between microbes and humans has prompted some people to voice concerns about interventions such as probiotics getting ahead of the science.

Researchers are beginning to study the potential for probiotics to help treat conditions such as antibiotic-associated diarrhea, vaginal yeast infections, urinary tract infections, irritable bowel syndrome, and eczema in children. But so far clinical research has been limited.

“FDA has somewhat limited oversight over dietary supplements, except when something goes wrong,” says Jesse L. Goodman, chief scientist at FDA. “Manufacturers are required to report serious adverse events, and FDA will investigate those,” Goodman notes. Thus far, he says, “there haven’t been a lot of serious adverse events from the commercially made probiotics.”

Goodman says the market for probiotics can be considered a “buyer-beware situation,” although he adds that he is unaware of much threat from these products.

Assessing the safety of probiotics and their potential to treat diseases in humans is being hampered by the fact that many manufacturers are not willing to disclose what is in their products.

“It would be great for these companies to bring forward more information about their products, to engage the research community,” Goodman says. “Some companies have been very willing to provide researchers with information on the manufacturing and content of their products, but in many cases, researchers have a hard time knowing what a product is.”

Scientists highlighted the lack of information available about probiotics during a three-day meeting last month hosted by the National Institutes of Health. They also pointed out other challenges they are facing when it comes to translating knowledge of the human microbiome into products that are beneficial for human health.

Such products could include probiotic supplements, but a lot of discussion at the meeting centered on moving beyond dietary supplements to actual drugs.

For example, some researchers are trying to identify small molecules produced by human gut microbes. Many of these molecules are bioactive and believed to influence processes such as human metabolism. Others are thought to interfere with biochemical pathways that can lead to diseases such as atherosclerosis, obesity, or even behavior and neurodevelopmental problems.

Once the compounds generated by the bacteria are identified, drugs can be developed to prevent the bacteria from releasing compounds that are implicated in disease.

One of the challenges researchers face in developing drugs that target biochemical pathways between a human host and its microbiome is what Jonathan Braun, a physician and researcher at the University of California, Los Angeles, School of Medicine calls the “hit-and-run effect.” Chemicals produced by the microbiome can affect human physiology during unique windows of time, particularly during early childhood, he explains. “Even if later on your microbiome totally changes, or you decide to therapeutically modify it, it might not matter because that unique impact it had on our physiology has already taken place.”

Some researchers are studying a completely different way of manipulating the human microbiome—transplanting feces from a healthy donor into a patient suffering from a particular disease. The donor material is typically introduced into the patient by colonoscopy or as a suppository.

Physicians have had some success in performing fecal transplants in patients with recurrent Clostridium difficile infections. Such infections cause severe, chronic diarrhea that can be life threatening. For example, Elaine O. Petrof, a professor of microbiology and immunology at Queen’s University School of Medicine, and colleagues published what’s being called the “repoopulate” study earlier this year (Microbiome 2013, DOI: 10.1186/2049-2618-1-3). They showed that a stool substitute made from 33 different intestinal bacteria isolated in pure culture from a single healthy donor could be used to treat recurrent C. difficile infections that had failed to respond to repeated treatment with antibiotics.

Although fecal transplants appear promising for treating C. difficile, physicians are performing the procedures without any particular protocols, warns Alexander Khoruts, a gastroenterologist and immunologist at the University of Minnesota. And, he notes, some patients are doing the procedure on themselves for a variety of indications, among them irritable bowel syndrome, arthritis, and autism.

A concern on the horizon is that as the microbiome gives up its secrets, researchers will turn to synthetic biology as a means to manipulate it. Any products developed via this route could still be classified by FDA as food or dietary supplements, in which case they would not be subject to regulatory review of safety and efficacy. Synthetic biology could expand the life span of bacteria and viruses, says Rosamond Rhodes, a professor of medical education and director of bioethics education at Mount Sinai School of Medicine. Synthetic biology could also be used to make bacteria in probiotics more resistant to mutation.

Synthetic biology could be useful, but it could also be dangerous, Rhodes cautions. “Scientists are just beginning to understand the human microbiome,” she says. “A great deal will have to be learned before the microbiome interventions become feasible.”

Microbiome
Patients given probiotics in the ICU get more blood infections
Antibiotics
Common allergy drug makes resistant bacteria vulnerable to antibiotics
Microbiome
Baby poop may hold a secret to food allergies﻿
Share X
To send an e-mail to multiple recipients, separate e-mail addresses with a comma, semicolon, or both.
Title: The Dubious Allure Of Probiotics
Author: Britt E. Erickson
Chemical & Engineering News will not share your email address with any other person or company.