NSF’s assistant director for mathematical and physical sciences talks about budget problems, merit review, and the role of scientist as advocate

[+]Enlarge
Credit: Andrea Widener/C&EN
Crim at his office at the National Science Foundation. 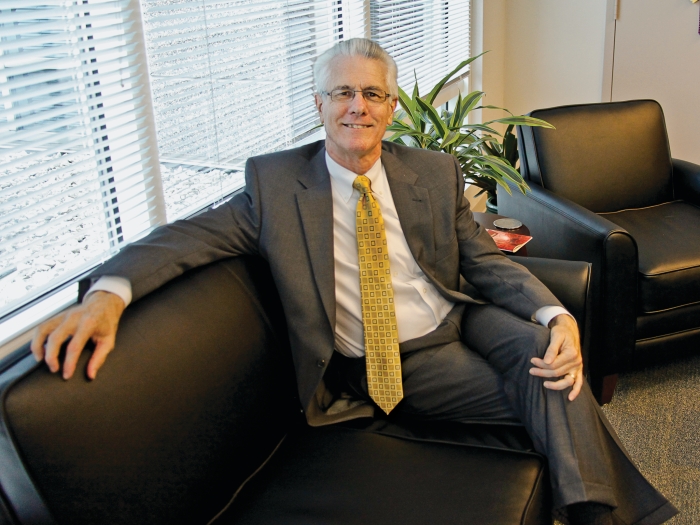 Credit: Andrea Widener/C&EN
Crim at his office at the National Science Foundation.

F. Fleming Crim has had to make some changes in his way of thinking since he took over the National Science Foundation’s Directorate for Mathematical & Physical Sciences (MPS) in January.

He’s turned from focusing mostly on bench science—prior to coming to MPS he was a chemistry professor at the University of Wisconsin, Madison—to considering overarching research policies and procedures for one of the biggest research funders in the nation.

Crim is also perfecting the skill of talking to nonscientists. This is still key because his audiences now are as likely to be the public or congressional staff members as they are to be fellow scientists.

But Crim’s biggest challenge is still evolving. He’s focused on how to keep MPS activities directed toward basic science when an austere budget environment makes lawmakers want to see concrete results from federal investments—something that’s hard to do for basic R&D.

“Unconstrained fundamental research is the special thing that NSF does,” he says. “I see my challenge as trying to make that happen as much as possible.”

Across-the-board budget cuts caused by sequestration have added to that challenge. The cuts, which took effect on March 1, were not as bad as NSF had originally anticipated, with an average 2% cut across the agency’s $6.9 billion 2013 budget.

However, applying those cuts wasn’t straightforward. NSF decided early on that it wouldn’t reduce funding for large multiuser facilities such as telescopes, since making those cuts can end up costing more money in the long run by extending the projects’ lifetime. And it wanted to continue support for young scientists, which meant early career development awards and graduate student fellowships didn’t face the ax. The result was slightly bigger cuts to the core of its budget: grants to individual scientists.

For MPS, the caveats meant a 4.5% reduction to its $1.2 billion 2013 budget. This cut will result in 100–200 fewer grants throughout the departments that Crim oversees: astronomy, chemistry, materials research, mathematics, and physics. “That’s a lot of money out of a budget our size,” he says.

The actual cuts haven’t been spread evenly across the disciplines, primarily because the different areas don’t spend the same amount on individual grants, he says. For example, astronomy spends only 20% of its funding on individual investigator grants because it spends so much on research telescopes. Chemistry, on the other hand, spends 87% on individual grants. “At the end of the day, we tried to be as evenhanded as possible,” Crim explains.

Not knowing what will happen next with the federal budget or sequestration has been a major challenge, Crim says. For fiscal 2014, Congress hasn’t passed a federal budget through the normal process, partly because Republicans and Democrats disagree on whether to continue the sequestration cuts or eliminate them as President Barack Obama’s proposed 2014 budget does. The confusion “is having real consequences for our budget planning—we don’t know what is going to happen,” he says.

That doesn’t mean they will always agree about what the agency should be investing in, he says. “There is a bit of tension with Congress and the Administration that always exists about doing applied, short-term research or fundamental, long-term research, but NSF’s role is clear,” Crim says. “Fundamental research is where we uniquely contribute to the nation.” That includes being the supporter of basic science as part of major government-wide initiatives, from manufacturing to brain science.

Crim thinks that, for the most part, NSF-funded research should bubble up from the scientific community, rather than be driven by specific national goals. “We are trying to stimulate good ideas, we are not trying to tell people what to work on,” he explains.

Stimulating a large number of good ideas, however, presents its own challenge. Specifically, Crim is worried about the consequences to both the math and physical sciences community and the NSF program officers as the number of research grant applications grows. They received about 7,900 proposals in 2012, up from around 6,200 just five years ago, which makes the merit review process more difficult.

Merit review is an intensive process if you do it correctly, and MPS is exploring ways they can better handle such a high volume of applications. “We really need to be as efficient as possible for the sake of the people of NSF and in the community,” Crim says. “We actively talk about that, but I don’t think anybody has found the magic bullet.”

Although there are things NSF can do to improve, Crim says he loves his new job and is impressed by the people who work at the agency. “NSF is doing a lot of good things by serving the community of talented scientists,” he says. “Scientists doing fundamental research serve the nation in many ways, sometimes on a timescale of a few years, sometimes on a timescale of 50 years.”

Policy
Playing Nice On The Budget
Policy
NSF: Basic Science Set To Grow
Policy
Budget Battles
Share X
To send an e-mail to multiple recipients, separate e-mail addresses with a comma, semicolon, or both.
Title: F. Fleming Crim
Author: Andrea Widener
Chemical & Engineering News will not share your email address with any other person or company.