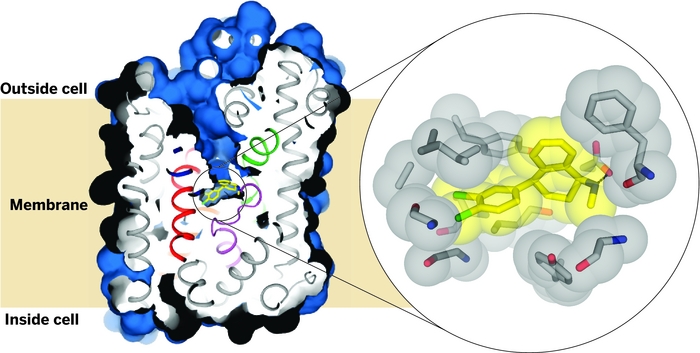 Credit: Nature
The antidepressant sertraline (yellow) binds in the main binding pocket of LeuBAT, a bacterial mimic of a human neurotransmitter transporter protein. The outside of the protein and its binding pocket are shown in blue in this cross section of the complex.

Antidepressants target transporter proteins in the human brain that regulate the levels of neurotransmitters such as serotonin and dopamine. The drugs block the transporters from removing neurotransmitters from nerve-cell synapses, thus having a psychoactive effect. But because these human proteins have been difficult to crystallize, information about the exact way they bind to the drugs has been limited.

Although the discovery of a common binding scheme for antidepressants drew excitement from some quarters, skepticismhas arisen in others. That’s because the work was done with modified transporters from bacteria, and bacterial proteins might not be reliable stand-ins for human ones. Nonetheless, the work, if verified, could help with the much-needed discovery of more effective antidepressants.

In the study, Eric Gouaux and coworkers at the Vollum Institute at Oregon Health & Science University solved 12 high-resolution crystal structures of a bacterial mimic of biogenic amine transporters complexed with four types of antidepressants. They used the modified bacterial transporter because multiple attempts to crystallize human transporters have been unsuccessful.

To create the model, they genetically engineered a bacterial transporter called LeuT by adding amino acids from the human serotonin transporter binding site. They believe the modified transporter, called LeuBAT, binds antidepressants in the same way that human biogenic amine transporters do.

Gouaux and colleagues’ study shows that antidepressants bind LeuBAT in the transporter’s main binding pocket—not, as earlier studies had indicated, at an “ext­racellular vestibule” site 15 Å away from the main binding site. The drugs have a saddlelike shape that straddles one of the transmembrane helices and wedges between two other pairs of transmembrane helices, locking the transporter in an inactive open conformation, Gouaux says.

“The results will no doubt have those who have pursued the structural basis of serotonin transporter pharmacology buzzing—that is, excited by the effort, but also wondering how well the structures relate to the real thing,” says Randy D. Blakely, a professor of pharmacology and psychiatry at Vanderbilt University School of Medicine.

Gouaux acknowledges that there could be doubts about whether the mutated bacterial transporter is an accurate model for eukaryotic, including human, transporters. However, a structure of an antidepressant bound to an insect transporter that his group published last month shows similar binding to LeuBAT, boosting confidence in the modified bacterial transporter finding (Nature 2013, DOI:10.1038/nature12533). The two studies “provide a mutually reinforcing view of how these inhibitors act,” Gouaux says.

“These two papers represent seminal work in the area of neurotransmitter transporters and mechanism of action of antidepressants,” says Kristian Strømgaard, a professor of chemical biology in the department of drug design and pharmacology at the University of Copenhagen. Nevertheless, he notes that a “primary caveat is that LeuBAT is not functional. Thus, the work provides seminal information on binding of antidepressants and fits well with previous modeling and pharmacological studies but provides less information on function.”

But Gouaux and coworkers believe theirs is an improvement over existing models. “This work will go a long way to pushing the field toward more reliable and more realistic models,” Gouaux says.