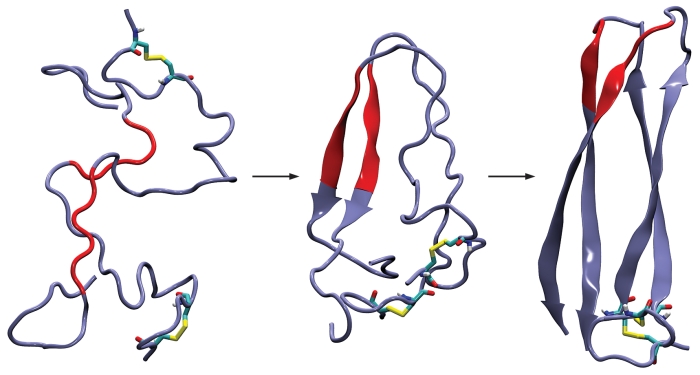 A number of diseases—including diabetes, Alzheimer’s, and Parkinson’s—are associated with polypeptides that misfold and aggregate into fibrils that further clump together to form plaques. Researchers have now characterized the structure of an intermediate that leads to fibrils in the folding pathway of a polypeptide implicated in type 2 diabetes.

Disrupting formation of the intermediate structure may provide a new target for preventing or treating the disease, which is a growing public health problem. Type 2 diabetes is defined as an inability to produce enough of or respond properly to insulin. Consequently, glucose builds up in the bloodstream. Over time, the condition causes increasingly serious health problems.

The polypeptide they studied is called human islet amyloid polypeptide (IAPP), also known as amylin. IAPP is a hormone coproduced with insulin in the pancreas and normally serves as an appetite suppressant. Formation of IAPP plaques is associated with type 2 diabetes. Two decades ago, researchers identified a short segment in the middle of IAPP that is critical for forming the characteristic pleated β-sheet secondary structure of the fibrils.

But when Robert Tycko, a biophysicist at NIH’s National Institute of Diabetes & Digestive & Kidney Diseases, and coworkers solved the structure of IAPP fibrils in 2007 using solid-state nuclear magnetic resonance spectroscopy, they found that the critical segment was part of a disordered loop.

“That just didn’t make any sense,” Zanni says. Researchers knew that mutations in the segment could prevent fibril formation, but the loop should have been able to accommodate mutations without interfering with the overall fibril structure.

Zanni’s team has now solved the mystery: Using two-dimensional infrared spectroscopy to look for β-sheet structure, they found that the segment forms β-sheets in an intermediate aggregate that the polypeptides form en route to fibrils.

The β-sheet structure in the intermediate is different from that found in fibrils, a result that was “entirely unanticipated,” Tycko tells C&EN. Tycko adds that the study demonstrates the power of using 2-D IR spectroscopy to study the structure of amyloid-forming systems. The technique uses less material and has better time resolution compared with solid-state NMR.

How many IAPP polypeptides assemble together into the β-sheet intermediates is unknown. Zanni estimates that at least five polypeptides aggregate, but he won’t suggest an upper limit. Fibrils incorporate thousands of IAPP molecules.

Finding the intermediate structure helps explain differences in diabetes susceptibility among various species. For example, rats, hamsters, and rabbits don’t get type 2 diabetes. They all produce IAPP, but they incorporate proline into the key fibril-promoting segment. Prolines inhibit β-sheet structures and therefore prevent formation of fibrils and plaques by preventing formation of the prefibril intermediate.

Comments
David Horstman (November 21, 2013 12:28 PM)
This sounds like very promising research for attacking diabetes, Alzheimers, and other autoimmune disorders. Will it continue knowing that pharmaceutical companies make billions producing diabetic treatments and blood testing supplies? I hope you are able to get increased funding for this breakthrough research. I have been diabetic for 40 years and would not miss 3 shots and 3-4 blood test per day.
Reply »