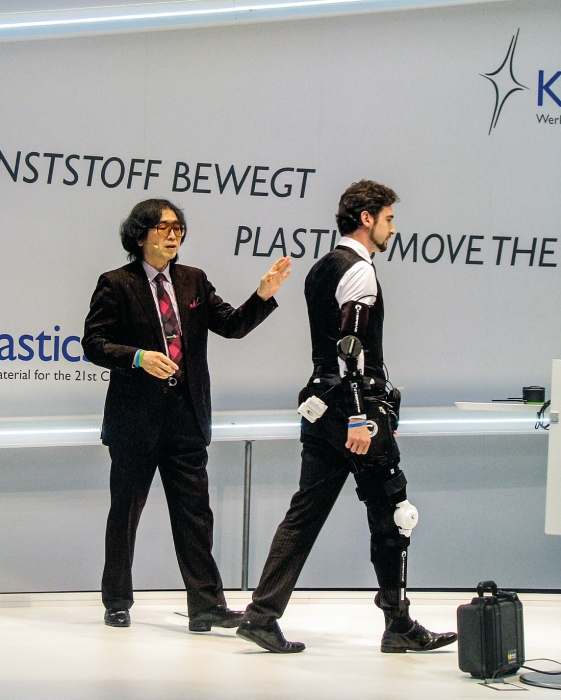 If you were to strap on the Hybrid Assistive Limb (HAL), a wearable robotic suit, its sensors would detect the tiny electrical pulses that are fired by your brain and run along the surface of your arms and legs as you attempt to move. Almost immediately, sophisticated software would direct HAL’s motors, powered by a battery in the small of your back, to effortlessly lift you from a seated to a standing position. Then it would help move your legs and arms to walk. You might look like an extra in a science-fiction movie, but if you were elderly or infirm, HAL could be the difference between being confined to a wheelchair and popping out to the store.

HAL is the invention of Yoshiyuki Sankai, a professor in the Graduate School of Systems & Information Engineering at Japan’s University of Tsukuba. Sankai has teamed up with the plastics maker Bayer MaterialScience to produce the suits commercially. HAL and other suits like it could become a new multi-billion-dollar market for plastics and electronics. And in Sankai’s view, it’s an example of what scientists might achieve for society if they would only be willing to look further into the future and operate in multiple fields.

Born in Okayama, Japan, in the late 1950s, Sankai is a polymath with expertise in electronics, robotics, and medical technologies. He explains in a matter-of-fact way that he was nine years old when he read “I, Robot” by Isaac Asimov and decided he would become a scientist. Soon after reading the book, he began conducting electrical experiments. He started work on his “grand design” to develop HAL in 1991.

Sankai’s approach is straightforward: Identify a major societal problem, and then find a solution to it. In the case of HAL, he recognized that an aging population will require assistance with mobility. He is critical of the short-term culture of science and argues that the real gains are to be made when scientists look not years but decades ahead. “I would particularly like to encourage young researchers and students to demonstrate their ability in unexplored, innovative R&D, and not follow other researchers’ papers,” he says.

If science is to solve major challenges, the effort must also be multidisciplinary. “Scientific fields are fragmented. In order to solve complex problems that arise in real life, a multidisciplinary R&D approach is important and collaboration is necessary,” he says.

Over the past year, Sankai and Bayer challenged some of the world’s top design agencies to come up with potential uses and designs for the first commercial version of HAL. In recent weeks, Sankai chose a design from a Japanese company featuring a suit that attaches with Velcro straps. Bayer will provide polycarbonate, a rigid and lightweight polymer, for the main exoskeleton, as well as polyurethanes for electrode straps and coatings.

Potential applications for HAL are so varied and the potential demand for the suit so big that Bayer isn’t daring to estimate the size of the market. It could become a very significant market for polycarbonate composites, according to Patrick Thomas, chief executive officer of Bayer Material­Science.

HAL is a plum project for Bayer, whose motto is “Science for a Better Life.” Sankai, who claims to have rejected offers by the U.S. and other governments to develop a military version of HAL, decided that Bayer was the right kind of partner after Thomas showed him a picture of Solar Impulse, a solar-powered airplane that uses plastics made by Bayer.

The current HAL prototype design, featuring technologies such as the latest lightweight materials and components, has been successfully tested in hospitals in Japan. Thomas enthuses at a video of an elderly Japanese man who had been wheelchair-bound for 30 years but who was immediately able to stand once he put on the suit. After two weeks, he was able to walk in the suit with the help of canes.

The German government has seen enough to know that it wants 10 of the suits in every hospital in Germany, Sankai says. The aging population in many parts of the developed world means HAL could soon be in widespread demand. And HAL could be useful for nurses, firemen, and other professionals who must lift heavy objects, Thomas says. Recreational markets also hold massive potential: HAL suits could be programmed so that golfers can experience the swing of Tiger Woods, Thomas gives as one example.

Sankai is a serial inventor. His other successful inventions include artificial hearts and kidneys. The common theme of Sankai’s projects is the application of technology to improve human lives.

Whether his robotic suits are used by the elderly to walk, by nurses to lift patients from their beds, or by swimmers to swim faster, they have the potential to change many areas of society. Sankai urges other scientists to look further ahead. If they are to maximize the effect they have on people’s lives, he says, they need to break out of their own fields and seek the bigger societal challenges of the future.

Materials
Toray to supply carbon fiber to personal jet–maker Lilium
Materials
Adhesive tape allegedly helped Tom Brady get to the Super Bowl. Does it work as described?
Materials
BASF, partner rethink the bicycle seat
Share X
To send an e-mail to multiple recipients, separate e-mail addresses with a comma, semicolon, or both.
Title: Yoshiyuki Sankai
Author: Alex Scott
Chemical & Engineering News will not share your email address with any other person or company.