[+]Enlarge
Credit: Alex Scott/C&EN
Gai shows the sample reactor chamber for ESTEM, which she designed and uses at the JEOL Nanocentre in York, England. 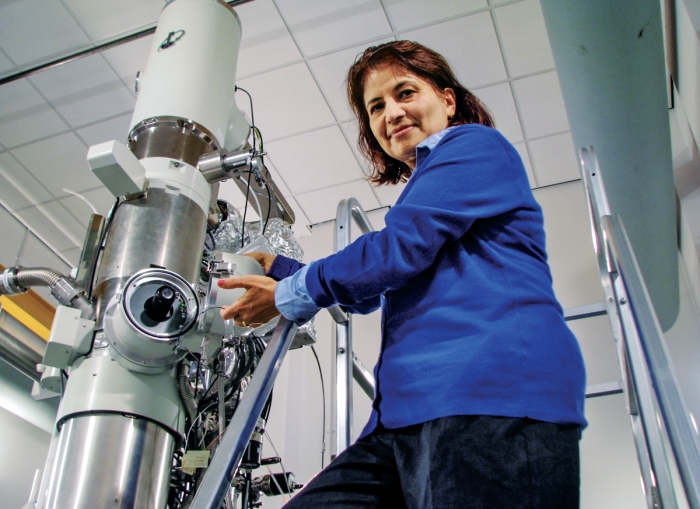 Credit: Alex Scott/C&EN
Gai shows the sample reactor chamber for ESTEM, which she designed and uses at the JEOL Nanocentre in York, England.

It’s a dreary late fall Monday in York, England, and it’s starting to rain. Perfect conditions, then, for Pratibha L. Gai, JEOL professor of electron microscopy at the University of York, to go into a small room with no natural light and view the world at the atomic scale using the planet’s most sophisticated electron microscope. Called an environmental scanning transmission electron microscope, or ESTEM, the machine can display atoms that are one-tenth of a nanometer in size interacting with one another during a chemical reaction in real time.

The level of magnification attained by ESTEM is the equivalent of using a telescope to watch “a moving golf ball on the surface of the moon,” says Gai, a woman with charisma, steely determination, and a lifelong passion for science.

Gai isn’t just any scientist using the powerful tool; she is its inventor. ESTEM is the latest high-resolution version of the environmental transmission electron microscope, or ETEM. Gai and her coworkers developed ETEM in 1993 and ’94. By using it, Gai became the first human to view individual atoms interacting in real time under controlled reaction conditions. “I wanted to be the first one to do that,” she says. “Everything starts from atoms, including chemical reactions.”

To create ETEM, Gai and her team undertook a major redesign of the standard electron microscope. Modifications included drilling a hole through the imaging lens, enabling gas to be pumped into the electron microscope column so that its sample chamber could be used as a tiny but fully functioning chemical reaction vessel that operates at high temperature and pressure. Before Gai took on microscopy, materials could be viewed at high resolution only before and after a chemical reaction had taken place in a vacuum at ambient temperature.

She then improved further on ETEM with ESTEM, which has capability for scanning. ESTEM also has aberration correction and features less background noise and better image resolution than ETEM, providing single-atom sensitivity in chemical reactions.

Gai is being recognized for her contributions to microscopy with the 2013 L’Oréal-UNESCO Women in Science award for Europe. Among the five awardees from across five continents, Gai and Reiko Kuroda, who has made significant discoveries in the field of chirality, are chemists. Each awardee received $100,000 in recognition of her accomplishments.

Gai is passionate about promoting women in science and hopes the award will bring her career to the attention of young women. “It is so important that women stay in science,” she says. Her own interest in science was inspired by Marie Curie. But she found few female role models when studying for her physics Ph.D. at the University of Cambridge and was still looking for them when she took her first career step as head of a surface reactions and catalysis group at the University of Oxford.

Although Gai started out as a physicist, today she counts herself as a chemist. Sensing greater opportunities outside the U.K., in 1998 she took up a chemistry role with DuPont in the U.S. along with another at the University of Delaware that would enable her to make advances in the field of microscopy. She returned to the U.K. in 2007.

It took persistence to create ETEM. Gai admits that it would have been easier to hand the idea to a commercial instrument manufacturer, but she had faith in her own calculations and took it on. “Sometimes you have to take intellectual risks to advance science,” she says.

Rather than gaining financially from her original invention, she and her coworkers decided to waive the patent. Today, about 20 ETEMs are used by academia and industry, with each machine costing up to $10 million. Although ETEMs are still expensive, Gai’s altruism enabled a key scientific tool to become more widely accessible. Firms that sell the microscope include FEI and Hitachi.

Since developing ESTEM, Gai has been using it to identify novel catalysts at the University of York’s JEOL Nanocentre, which she helped create and where she is codirector. Japan-based electron microscope maker JEOL is a major sponsor of the center.

What really makes Gai tick is identifying chemical reactions and developing catalysts that could one day benefit fields such as medicine and sustainable materials. Among her research projects, Gai and colleagues have been developing antibiotic nanoparticles to control infections in medical implants.

To date, Gai has published 250 peer-reviewed scientific papers and coauthored nine books. And she has no plans to slow down. “It’s even more exciting now,” she says of her career.

Over the past year, Gai secured about $3 million in funding from the Engineering & Physical Sciences Research Council, a U.K. government agency, to develop nanoparticle catalysts at the nanocenter. She’s adding to the more than 100 scientists at the six-year-old center by recruiting several postdocs to work on the project.

Weather forecasters are predicting particularly heavy rain in England this winter. Expect ESTEM, and Gai, to be busy.