[+]Enlarge
Credit: Ecovative
Shaping the future: Ecovative’s molded mycelium can be used to pad the corners of boxes. 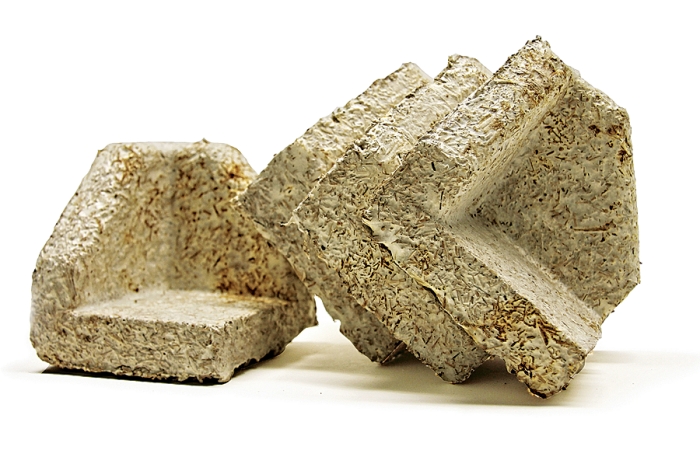 Credit: Ecovative
Shaping the future: Ecovative’s molded mycelium can be used to pad the corners of boxes.

If you thought there wasn’t “mush room” for alternatives to polystyrene (Styrofoam) in the world of packaging and insulation, think again. Eben Bayer wants to use mycelium, the mass of tiny branching threads made by fungi, as the glue to hold together a natural, moldable, and cheap packaging material. Mycelium gets its strength from chitin, the same stuff that makes a crab’s exoskeleton durable and tough.

Bayer first presented his concept when he was a student in a mechanical engineering class at Rensselaer Polytechnic Institute. Bayer’s professor encouraged him to take it further.

Since its conception, Bayer’s packaging idea has truly mushroomed. The young entrepreneur has set up a company with a 40,000-sq-ft mycelium-growing facility. And in recent weeks, the Green Island, N.Y., firm—called Ecovative Design—has raised $2.6 million in equity capital (C&EN, Oct. 21, page 17).

Bayer feeds his fungi with farm waste, such as corn components that can’t be fed to cows, and other fiber-filled leftovers, such as cellulose-laden sludge from a nearby paper mill. As long as it contains a woody material known as lignin and has cellulose in it, “we can use it,” the firm says.

After being placed into a mold along with some biowaste, over the course of a week, mycelium will grow and digest its partner material, forming shapes with properties similar to Styrofoam. Drying the mycelium, which has a smooth off-white surface, stops its growth.

Once a consumer unwraps a product from the mycelium packaging, the material can be used as mulch or it can be composted. In contrast, Styrofoam ends up in landfills, incinerators, or even the oceans. “We go head-to-head with plastic foam on cost, performance, appearance, and feel,” Bayer said recently in a BBC radio interview.

Ecovative has even begun offering its material as a green replacement for the Styrofoam core in surfboards.

Another technology for a greener world is emerging in noisy labs at Imperial College London and Queen Mary University of London. Research teams at both schools together have developed a type of photovoltaic cell featuring zinc oxide nanorods that increase the device’s electrical output by about 40% when exposed to sound vibrations (Adv. Mater. 2013, DOI: 10.1002/adma.201303304).

[+]Enlarge
Credit: Queen Mary U
Turn it up: These solar cells (nanorods shown) increase electrical output by 40% if it’s noisy. 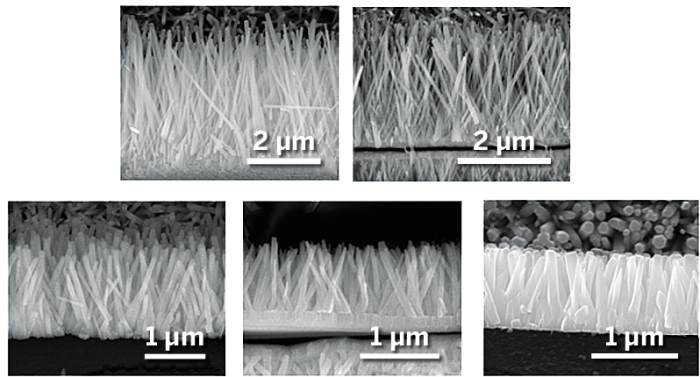 Credit: Queen Mary U
Turn it up: These solar cells (nanorods shown) increase electrical output by 40% if it’s noisy.

The nanorods channel free electrons in the devices to form a useful current. But they also prevent the electrons from converting to heat or light within the solar cells, an activity known as recombination. A greater amount of electricity can be harvested when there is less recombination. Vibrations—particularly sound vibrations—make the nanorods more efficient at preventing the phenomenon.

The researchers found that when ZnO-nanorod solar cells are exposed to sound levels as low as 75 decibels—the equivalent of typical roadside noise—the performance of the cells significantly improved.

The team also found that the high sound frequencies of pop and rock music are especially good at causing vibrations that enhance solar-cell output and that the technology responds poorly to classical music. “Led Zeppelin works very well,” says Joe Briscoe, a postdoc at Queen Mary University working on the project. The Australian rock band AC/DC was another favorite.

The study has implications for markedly improving energy generation from sunlight, including the performance of low-cost, printed solar cells. Noisy sunlit places such as airports, roadsides, and spaces with air-conditioning units could be the best locations for the sound-boosted solar cells. Surely, though, playing the devices songs such as the Beach Boys’ “Good Vibrations” couldn’t do any harm?