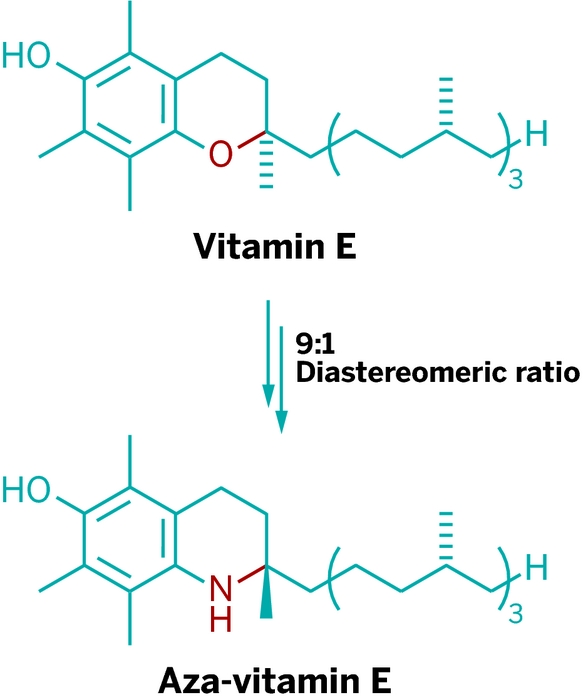 Students of organic chemistry learn early that the SN2 reaction can’t take place on tertiary carbons because of overcrowding on the triply substituted carbon. In the SN2 reaction, the incoming nucleophile normally attacks the electrophile’s carbon from behind to displace a leaving group in such a way that the electrophile’s stereochemical arrangement is flipped. But for electrophiles with a tertiary carbon, it’s long been held that the stereoinversion is blocked. This year, however, chemists defied that belief by coming up with a reaction that transforms tertiary alcohols into tertiary alkyl isonitriles while inverting the substrate’s stereochemistry (C&EN, Sept. 16, page 8; Nature 2013, DOI: 10.1038/nature12472). The reaction provides a shortcut to compounds with tertiary alkyl isonitriles or tertiary alkylamines, making it easier to synthesize natural products and design pharmaceuticals and materials. Ryan A. Shenvi, Sergey V. Pronin, and Christopher A. Reiher of Scripps Research Institute California developed the reaction, which makes use of the strong Lewis acid scandium(III) trifluoromethanesulfonate as a catalyst. The starting alcohols are converted into trifluoroacetate esters, which undergo attack by a trimethyl­silyl cyanide nucleophile. The resulting isonitrile can be converted into many other nitrogen-containing functional groups, Shenvi noted. He told C&EN that he wouldn’t exactly call the transformation an SN2 reaction because about 10% of the product retains its original stereochemical configuration. Rather, he suspects the reaction forms a transient ion pair with the catalyst that blocks the incoming nucleophile from one side of the substrate.