UNDER PRESSURE
[+]Enlarge
Credit: Evonik
Evonik researchers, such as this one in Germany, are being asked to deliver more innovation without higher costs. 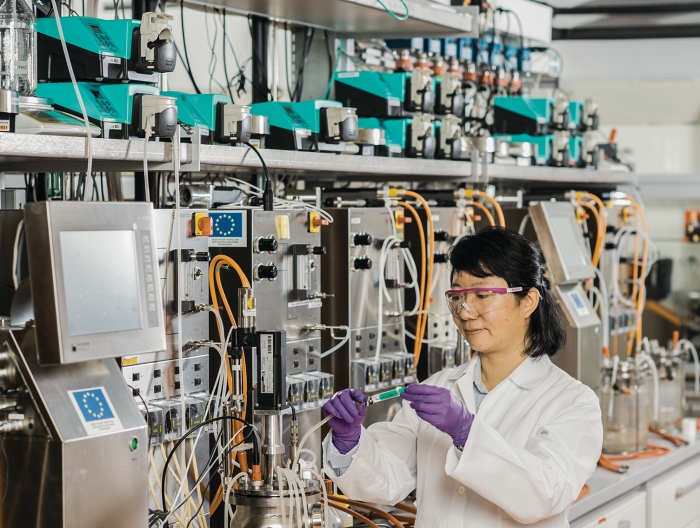 Credit: Evonik
Evonik researchers, such as this one in Germany, are being asked to deliver more innovation without higher costs.

In the atrium of the Marl, Germany, headquarters of Creavis Technologies & Innovation, the central R&D group of Evonik Industries, is a display with a number—currently eight digits long—that is steadily increasing. It shows in real time how many tons of greenhouse gas emissions Evonik’s products have saved during the year. The display is a symbol of the chemical company’s aspiration to develop materials that have a positive impact on Earth and its finite resources.

Evonik achieves the savings with products such as lightweight polymers and specialized tire raw materials that cut energy use for customers. But for managers at the $18 billion-per-year company, the green digits aren’t rising fast enough. They want to ramp up the number of sustainable products and processes Evonik is developing as part of a broader strategy to increase R&D productivity.

Pressure on researchers at the firm to deliver more is growing as a result of the aggressive financial targets that Evonik set following its 2013 launch on the stock market and the ever-shorter product development cycles of its customers. Many customers don’t just want new products sooner, they also want them to be greener.

The danger for Evonik is that placing greater demands on its R&D team could end up stifling creativity and the ability to innovate. But Peter Nagler, Evonik’s chief innovation officer, told journalists at a briefing in Marl recently that he is confident a more productive research capability will emerge.

In a bid to hike R&D productivity, the firm is revamping Creavis. Starting this month, it has been divided into two main branches: a portfolio management unit with a commitment to invest in new technologies emerging outside the firm, and a science and technology unit charged with advancing the best of what its own people can develop in-house.

Evonik as a whole has about 2,500 staffers working on 500 research projects at any given time across 35 sites. In 2012, it spent $540 million on R&D. About 85% of that was spent directly by its business units on projects that typically encompass the “development” end of R&D. The rest went to Creavis, which has a portfolio of about 20 longer-term, strategic research projects.

The firm is not changing the customer-oriented R&D undertaken by its business units. But with the right tweaking, Evonik believes it can get more innovation out of Creavis.

Through the portfolio management unit, the company is keen to collaborate more with scientists outside the firm and is looking at using new channels such as the crowdsourcing of scientists’ ideas around the world via the Internet.

Evonik executives at the event acknowledged that the firm has arrived later than many competitors to embrace the concept of open innovation and knowledge sharing, but they emphasized that they fully intend to catch up.

“We realize we can’t do it alone anymore,” Patrik Wohlhauser, board member for Evonik’s consumer, health, and nutrition business, told journalists in Marl. “The hard part is blending that openness and sharing of information while ensuring that the firm continues to file a patent almost every day. Incorporating that cultural shift will take time.”

The company also hopes to raise the level of innovation within Creavis. One way is by encouraging researchers to champion their own ideas for promising technologies. Nagler cited one instance where the head of a Creavis research group gave up his position to pursue a dream of commercializing a novel technology. Evonik supports this kind of move, Nagler and Wohlhauser emphasized.

“We keep asking ourselves if we are set up the right way,” Wohlhauser said. “We have to try new things all the time because the innovation cycle is shortening. Timeliness is more important.”

The actions by the firm to step up innovation follow the recent introduction of an initiative called Leading Innovation, with which it is encouraging employees to take risks based on trust, openness, and close cooperation.

“We want to be in a position to take up new ideas more quickly,” Nagler said. “We need to be more flexible in the way that we start research projects, more efficient in the way we manage them and, of course, also in the way we end them if we see no sufficient potential.” 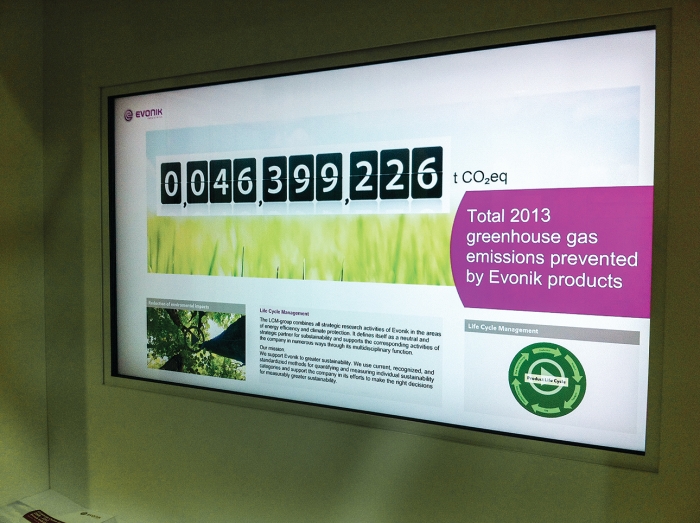 To make the number on the Creavis display rise even faster, Evonik is increasing emphasis on its Carbon Footprint Estimation methodology, a rating tool that enables the firm to pick out the potential environmental impact of a product while it’s still at the R&D stage. Often, the tool guides the firm to use a biotechnology-based production process.

Indeed, Evonik’s plan for the years ahead is to spend more than 10% of its R&D budget on biotech. By 2015, the firm will have spent about $480 million on R&D and capacity expansion for just one biotech product: the lysine-based animal feed additive it calls Biolys.

Similarly, the firm’s goal is to increase sales in its Health & Nutrition business from a little more than $400 million in 2012 to $1.4 billion by 2020 partly through raising investment in biotech R&D for chemicals such as Biolys. Other biotech products in development include active pharmaceutical ingredients, antiaging cosmetics, and cosmetic emollients. “We’re not just in biotech because it sounds nice to have,” Wohlhauser said.

Despite the splash Evonik tried to make, investors yawned at news of the Creavis revamp, sending the firm’s share price up only marginally after it was announced last month. Yet stock analysts are convinced that the company’s overall strategy will deliver financial growth in the coming years. The median prediction among the analysts following Evonik is that the firm’s pretax profit margin will increase from 12.5% in the fourth quarter of 2013 to 16.8% in 2016.

Among its flagship research projects that stretch beyond 2016, Evonik is developing a fermentation process for making laurolactam, a nylon 12 precursor, from palm and other oils. It would replace a 40-year-old petrochemical process that requires five synthetic steps.

Since 2013, the firm has been testing the process in a pilot facility in Slovakia that cost several million dollars. “In the very long term, the process could also use glucose instead of palm kernels,” said Jürgen Herwig, vice president of product and process development for high-performance polymers at Evonik.

Within the space of about five hours—the time it took Evonik to brief journalists about its R&D strategy in Marl—the number on Evonik’s digital display had jumped by about 25,000 to 46,399,226, putting the firm’s materials on track to cut emissions by around 50 million metric tons in 2013.

If Evonik succeeds in cranking up R&D, it will have done so partly by rolling out a greater number of green products and processes. It will be several years before Evonik knows if its R&D restructuring worked, but one indicator will be if those green digits really start to fly.