VANISHING SPECIES
[+]Enlarge
Credit: Gary Fellers/USGS
EPA has faced numerous lawsuits for failing to assess the impacts of pesticides on endangered species, such as the California red-legged frog shown here. 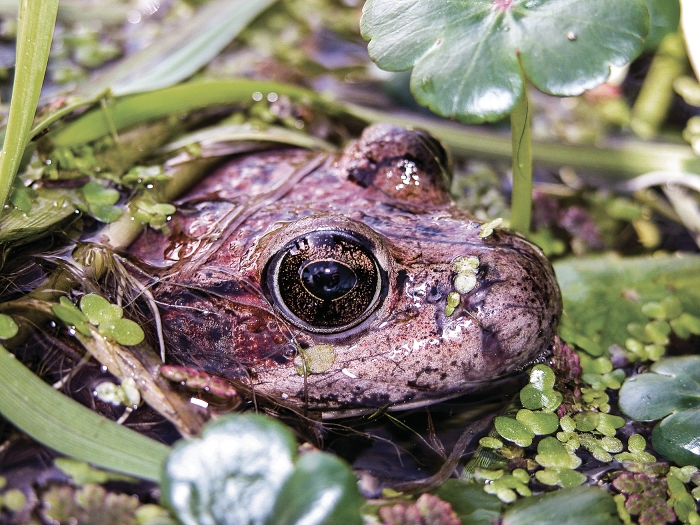 Credit: Gary Fellers/USGS
EPA has faced numerous lawsuits for failing to assess the impacts of pesticides on endangered species, such as the California red-legged frog shown here.

The Environmental Protection Agency plans to try a new approach for assessing the risks of pesticides to endangered species. Under law, EPA must consult with other key federal agencies if a pesticide being registered or reregistered has the potential to affect an endangered species or its critical habitat. In the past, this consultation has happened late in the approval process, but under an interim approach being rolled out this year, it would be initiated early.

Although the agency has yet to say which pesticides will be subject to the process, EPA plans to test it on some existing pesticides that are coming up for reevaluation this year. As EPA gains more experience with the approach, it plans to work with stakeholders and other federal agencies to finalize the process.

Pesticide manufacturers are uneasy about the changes, particularly because it is unclear whether the assessment process will change how pesticides are reevaluated for safety. Industry groups also argue that, under the federal pesticide law, pesticides are thoroughly reviewed by EPA for safety, including effects on endangered species. Additional review of pesticides under the endangered species law by other federal agencies is duplicative and will cost taxpayers hundreds of millions of dollars, they say.

Environmental organizations, which have repeatedly sued EPA for failing to meet its obligations related to endangered species, say the new approach is a good step toward overhauling “a deeply flawed” process. But they predict that EPA will face several challenges in implementing it.

EPA is changing how it assesses the risks of pesticides on endangered species after facing more than a decade of lawsuits. The litigation has focused primarily on EPA’s failure to consult with the Fish & Wildlife Service (FWS) or the National Marine Fisheries Service (NMFS) when registering a pesticide that may affect an endangered species or its critical habitat. Most of the lawsuits have involved the re-registration of pesticides that are already on the market.

EPA is required to initiate such consultations with FWS and NMFS under the Endangered Species Act. Under the federal pesticide law, EPA must review the safety of existing pesticides at least once every 15 years. More than 1,000 pesticide active ingredients are scheduled for reevaluation during the next 10 years. Each of those pesticides could have multiple endangered species consultations associated with it. The problem is that neither FWS nor NMFS has the resources to conduct thousands of consultations in a timely manner.

Recognizing that they have not been able to keep up with their obligations under the Endangered Species Act, federal agencies turned to the National Academy of Sciences (NAS) in 2010 for advice on how to streamline the risk assessment process. Traditionally, EPA has conducted its risk assessment, and FWS and NMFS have conducted their own independent analysis using a different approach.

2006 EPA agrees to interim restrictions on applying 66 pesticides in California.

2010 Federal agencies ask the National Academy of Sciences (NAS) to provide advice on assessing the risks of pesticides on endangered species.

2013 District court dismisses CBD mega lawsuit, ruling that CBD must file a separate claim for each pesticide of concern. District court requires FWS to analyze the use of seven pesticides in and near habitats of the California red-legged frog within two years. NAS report recommends a common approach for federal agencies to assess the risks of pesticides on endangered species. Federal agencies announce three-step interim approach.

NAS released its report last spring, recommending that EPA, FWS, and NMFS work together when assessing the risks of pesticides on endangered species. FWS and NMFS should build on EPA’s analyses instead of conducting new ones, the report says.

Since then, EPA has been working closely with the two agencies to develop a process that reflects the NAS recommendations. This past November, the three federal agencies, along with the Department of Agriculture, announced that they had agreed on an interim approach.

The approach follows the NAS recommendations in that it uses a three-step process, says Donald Brady, director of the Environmental Fate & Effects Division in EPA’s Office of Pesticide Programs. Each of the three steps involves problem formulation, exposure and effects analysis, and risk characterization.

In the first step, the agencies will work together to determine whether a pesticide “may affect” or “has no effect on” an endangered species. To do this, EPA will rely on pesticide labels to infer where pesticides can be used. EPA will then work with the other federal agencies to relate those use sites with available geospatial data on land cover types.

“We have a number of existing data sets that we can take advantage of,” says Anthony W. Hawkes, a biologist with the Endangered Species Division of NMFS. Those data include the U.S. Geological Survey’s National Land Cover Dataset, USDA’s Cropland Data Layer, and data produced by USDA’s National Agricultural Statistics Service.

If a pesticide is applied in or is likely to move into an area considered to be in the range of an endangered species, then the agencies would determine that it “may affect” the species, and the pesticide would move on to step two.

In step two, the agencies will determine whether the pesticide is “likely to adversely affect” the endangered species. Step two examines direct and sublethal effects of pesticides, as well as indirect effects on a species’ habitat. It also considers effects of mixtures, adjuvants, and inert ingredients.

Step three builds on information collected in steps one and two. It considers effects on individuals as well as at the population level. If the agencies agree that a pesticide jeopardizes an endangered species or causes adverse modifications to its critical habitat, EPA must decide whether and under what conditions to approve the pesticide.

It is important for federal agencies to coordinate early, “ideally at the problem formulation stage” of each step, Brady says. That is a change from the way the process has traditionally been conducted. With the new approach, “we would be talking to stakeholders at the beginning,” he says.

In general, environmental groups are welcoming the new approach. The Center for Biological Diversity “is encouraged by the plan,” says Brett Hartl, the group’s endangered species policy director. “It is an important first step in addressing the long-standing failures of EPA to consult on the impacts of pesticides on endangered and threatened species absent litigation compelling them to do so,” he says. Likewise, the advocacy group Beyond Pesticides sees the new process as an important step “toward greater cooperation between agencies.”

But such groups fear that federal agencies will face an uphill battle in implementing the plan. They point out, for example, that EPA does not have accurate usage data for all pesticides. They also have questions about how the agencies will deal with formulations and mixtures, particularly because inert ingredients have not been thoroughly tested. And the groups question whether EPA will put in place conservation measures, such as no-spray zones, when a pesticide is determined to impact an endangered species.

Industry argues that consultations required under the endangered species law are duplicative with reviews that are required under federal pesticide law. The pesticide trade association CropLife America released a report in November estimating that endangered species consultations conducted by FWS and NMFS would cost taxpayers an extra $474 million over the next 10 years beyond what is already spent by EPA to review the safety of those pesticides.

EPA acknowledges that it is likely to face challenges while implementing the new approach. In step one, for example, “there is some work that we need to do in terms of species range and action area information,” says Richard P. Keigwin Jr., director of EPA’s Pesticide Re-evaluation Division. In particular, EPA plans to work with FWS and NMFS to better define the ranges for a large number of endangered species and to determine how far a pesticide is likely to move via drift, runoff, or other transport mechanisms.

“Similarly, for step two, we have some additional work to do regarding exposure modeling and effects characterization,” Keigwin says. For step three, more work is needed “in the area of weight-of-the-evidence and population-level responses,” he adds.

“The key part of this though is focusing on continual improvement,” Keigwin says. That includes “adaptively managing, learning from what we have done, looking for opportunities to streamline the process, and taking into account stakeholder engagement in the process.”

Although more work needs to be done, “we think we can work out the details in the context of these initial consultations,” Keigwin says. Those consultations will be conducted on a handful of existing pesticides that are scheduled to be reevaluated this year, Keigwin notes. EPA will use the approach on those compounds first, he says, because “new active ingredients generally are lower risk pesticides compared to existing compounds that are on the market.”

EPA hopes that within a few years, endangered species consultations will become a routine part of the pesticide reevaluation and registration process.