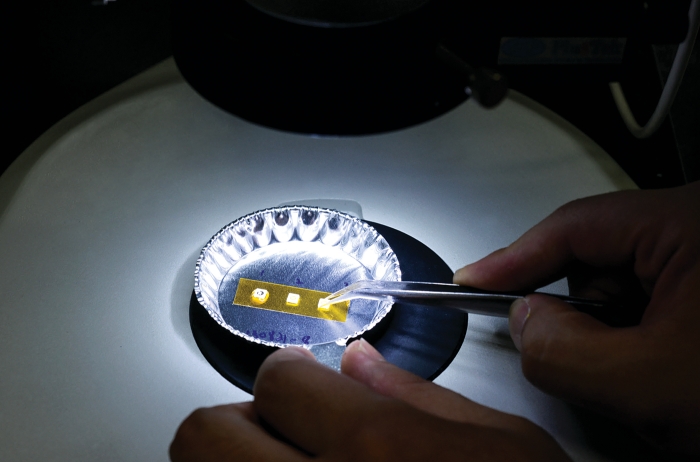 Standing on a platform straddling five steel water pipes each about 2 meters in diameter, Klaus Millrath, head of communications for Wacker Chemie’s massive chemical site in Burghausen, Germany, points out that the pipes and bolts installed in 1922 are the ones still used today to feed the complex’s hydroelectric power plant 100 meters below.

“Even now, hardly any water spills out,” Millrath says proudly. Burghausen’s potential for hydroelectric energy was the reason Alexander Wacker chose the site to establish his chemical company 100 years ago. Aided by that power, scientists there have invented a string of novel processes over the years, including ones to make acetic acid, acetone, and chlorosilanes.

Today, Burghausen is Wacker’s biggest R&D and production site, home to more than half of the firm’s workforce of 16,000. Wacker has almost 1,000 R&D employees, more than 80% of whom reside in Germany. The firm’s R&D activity involves about 260 projects in fields including energy, electronics, construction, automotive engineering, personal care, food, and biotechnology.

But the market has moved eastward. The firm now generates 85% of its $6.2 billion in annual sales outside Germany. And more than 40% of its sales are in Asia, from products including silicones for lighting applications and polysilicon for microchips and solar panels. The shift presents a dilemma for Wacker: Should it continue to foster R&D at sites such as Burghausen or facilitate closer relations with its customers by building expertise in Asia?

The company wants to have it both ways, according to Auguste Willems, the board member responsible for R&D. Willems insists that Wacker has no intention of cutting its research staff in Europe. Overall, the firm spent $240 million on R&D in 2013, about 4% of sales. R&D for 2014 is set to stay at about the same level.

But future spending above and beyond that figure will be in Asia. Already, nine of Wacker’s 21 technical centers are in Asia, and the company wants even more there. Of the nine centers, three are R&D hubs undertaking basic research in China. In 2012, the firm added a fourth Asian R&D hub, the Center of Excellence Electronics (COEE) in Pangyo, South Korea.

Wacker hired Kyu-Ha Chung in 2012 to set up COEE. So far, Chung, who studied materials science and polymer engineering at Massachusetts Institute of Technology before stints at Dow Corning and Samsung, has recruited 15 of the 20 scientists he is seeking to hire. Products already developed by Chung’s team in Pangyo include a silicone adhesive and a silicone-based thermal interface material for automotive electronics. Silicones for light-emitting diodes are also a big target for the group.

Chung emphasizes the importance of creating a sizable research team in the country. “Proximity to the Korean market and networking closely with major players are factors absolutely vital for success,” he says. “The pace of innovation in the electronics industry is rapid. In Korea, lead times for new products are often less than six months. If you don’t have speed, you’re nothing in this industry.”

A benefit of setting up an R&D center in South Korea, Chung says, is that the country’s culture of innovation and ethic of diligence mesh well with Wacker. “The Korean R&D center alone may not work that well. But if we can take advantage of 100 years of technology and add local innovation, then we can be very successful,” he says.

Wacker’s R&D future isn’t entirely in Asia. In an indication of its commitment to basic research in Germany, the company recently extended a collaboration with the Technical University of Munich’s (TUM) Institute of Silicon Chemistry for a second term of six years to conduct fundamental research into the structure of silicon.

Wacker will spend $3.4 million at TUM to fund a professorship for silicon-based chemistry and up to 20 doctoral research positions. In its first six years, the collaboration led to more than 30 research projects that yielded 10 patents and 35 scientific publications.

Other basic research projects also have a strong footing in Germany. For example, the firm is spending in the double-digit millions of dollars to develop lithium-ion technologies for electric vehicle batteries. Undertaking the research in Germany, R&D executives say, means they can tap into a wealth of lithium chemistry expertise among their own scientists and across German academia. Another benefit to researching in Germany is the availability of significant public funding.

Wacker may be expanding its R&D in Asia, but “we still have basic know-how in Germany, and we don’t want to lose that,” Willems says.

When asked about the most important inventions in the firm’s 100-year history, Rudolf Staudigl, Wacker’s chief executive officer, reels off a series of chemistries that were developed in Germany. Staudigl no doubt hopes that within the next few years he can add groundbreaking technologies developed in Asia to the list.

Business
For chemical makers, R&D in China makes sense
Business
Germany’s Wacker taps on the brakes
Business
Chemical Maker Altana Is Drawn West
Share X
To send an e-mail to multiple recipients, separate e-mail addresses with a comma, semicolon, or both.
Title: Wacker Targets R&D Growth In Asia
Author: Alex Scott
Chemical & Engineering News will not share your email address with any other person or company.