A key protein required to trigger a new life—a previously unknown receptor on the mammalian egg membrane that binds sperm, leading to fertilization—has been identified by a team of researchers in England (Nature 2014, DOI: 10.1038/nature13203). In addition to providing fundamental insights about the roots of life and fertility, the work could spawn new contraception methods and therapeutic strategies for infertile couples.

In 2005, researchers in Osaka discovered a protein located in the membrane of a sperm’s head that is essential for male fertility and named it Izumo1, after a Japanese marriage shrine. Since then, researchers had been searching unsuccessfully for its receptor.

Using techniques developed for detecting weak protein-protein interactions, a team led by Gavin J. Wright of the Wellcome Trust Sanger Institute, in Hinxton, has now finally tracked down Izumo1’s receptor in the plasma membrane of eggs and has named it Juno, after the Roman goddess of fertility. Izumo1 and Juno “interact at the moment we are conceived,” Wright says. Although the majority of the work was performed in mice, the team showed that the Izumo1 and Juno proteins in humans, opossums, and pigs are also binding partners, suggesting the match-up is conserved within mammals.

[+]Enlarge
Credit: Newscom
Sperm trying to fertilize an egg, which is about 100 μm wide. 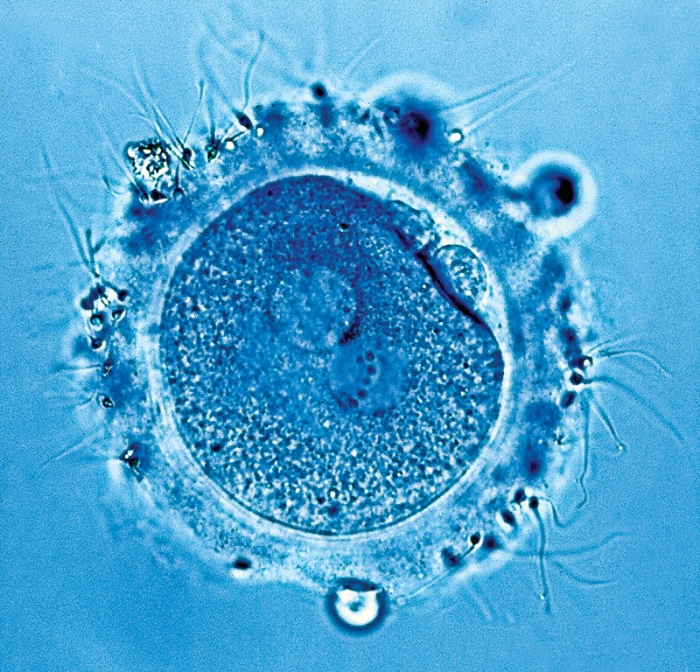 Credit: Newscom
Sperm trying to fertilize an egg, which is about 100 µm wide.

This is “the end of a decade-long search,” notes Paul M. Wassarman of Mount Sinai Hospital in New York City in an associated commentary (Nature 2014, DOI: 10.1038/nature13227). Wassarman is responsible for proposing a fertility mechanism several decades ago that is found in most biology textbooks, namely that sperm must first recognize and penetrate the thick sugar and protein coating found around eggs, called the zona pellucida. 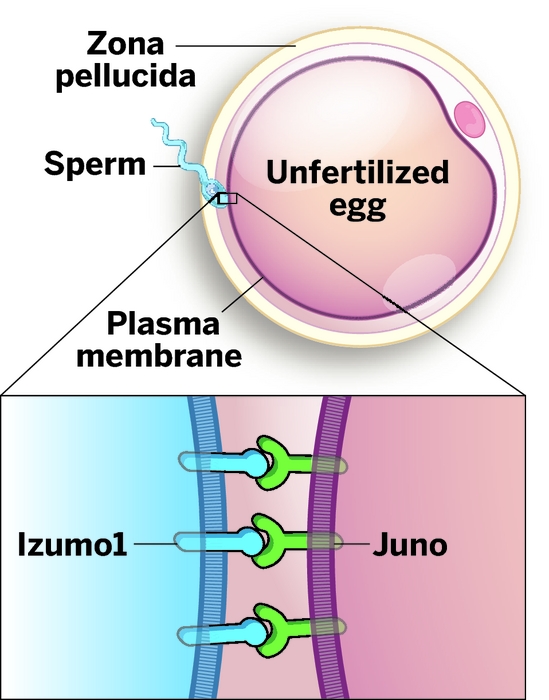 Credit: Adapted from Nature
The essential protein-receptor interaction for fertilization.

Since then, many scientists have studied how sperm traverse this challenging obstruction to reach the egg’s plasma membrane. Yet how sperm then form a final adhesion complex at the egg’s plasma membrane so fertilization can occur was unknown until now, comments Pablo E. Visconti, who studies signal transduction during fertilization at the University of Massachusetts, Amherst.

An important next step is to crystallize the Izumo1-Juno complex so that its three-dimensional structure can be obtained at atomic resolution, says Luca Jovine, an X-ray crystallographer at the Karolinska Institute, in Stockholm, whose research focuses on fertilization. Knowledge of the precise binding surface could help researchers find small molecules to interfere with the protein-receptor interaction as new drug candidates for contraception, Jovine adds.

Meanwhile, the work could lead to a simple genetic screen that could help guide fertility treatment, Wright says. For example, if a couple has a version of Izumo1 or Juno incapable of forming the binding complex, then in vitro fertilization (IVF) will fail. That's because the procedure still requires that a sperm bind and fertilize an egg even though this meeting is orchestrated in a lab dish. In this case the couple could skip expensive IVF protocols and instead try intracytoplasmic sperm injection, a procedure in which a sperm is directly injected into an egg, Wright says.

In the course of their work, Wright’s team also discovered the mechanism by which eggs avoid fertilization by multiple sperm. They found that shortly after a sperm has traversed the egg’s plasma membrane, Juno receptors “are shed from the plasma membrane in vesicles,” Visconti says. “This explains why no other newly arriving sperm can bind Juno receptors and enter the cell.”