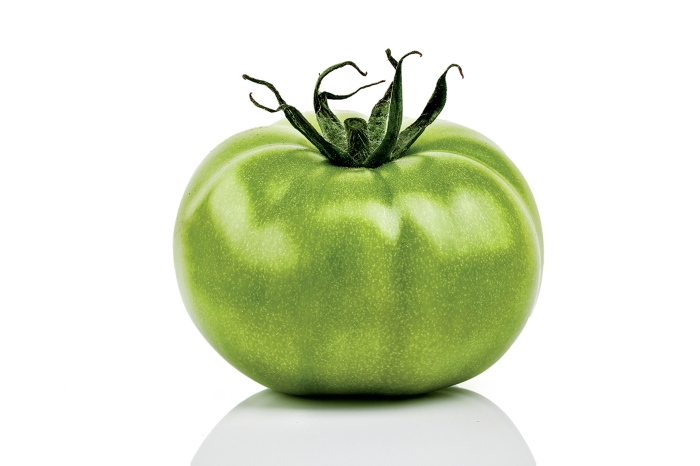 The adage “an apple a day keeps the doctor away” may well be extended to green tomatoes. Scientists at the University of Iowa have shown that a natural steroidal compound derived from green tomatoes boosts the growth of human muscle cells in lab cultures and is a potent inhibitor of muscle atrophy in mice.

With further testing, the compound, called tomatidine, could become a valuable prescription medication to help seniors recover from age-related illnesses and injuries. It also could serve as a nutritional supplement for athletes in training, time-crunched people who don’t exercise regularly, and even pets.

The discovery comes from a team led by Christopher M. Adams, an Iowa associate professor of internal medicine and of molecular physiology and biophysics. To find tomatidine, Adams and his coworkers developed a strategy that is fundamentally different from traditional drug discovery methods. The approach selects beneficial small molecules on the basis of the messenger RNA expression signatures they elicit in cells, Adams explains, rather than on observing their effects on a predefined molecular target. This strategy allows the scientists to capture and study the effects of all of a small molecule’s targets. 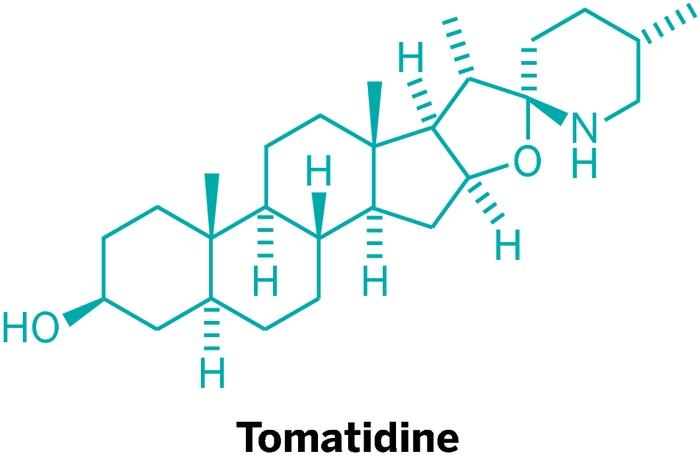 The Iowa researchers first met with success in 2011 when they identified ursolic acid as an inhibitor of muscle atrophy. Ursolic acid is a steroidal compound abundant in apple peels that is used as an ingredient in some cosmetics and topical ointments because of its antimicrobial and anti-inflammatory properties. Continuing the work, they identified tomatidine and found that it is 10 times as potent as ursolic acid for protecting against muscle atrophy and for boosting muscle growth (J. Biol. Chem. 2014, DOI: 10.1074/jbc.m114.556241).

Tomatidine is a hexacyclic steroid amine derived from α-tomatine, a compound abundant in green tomatoes that disappears as tomatoes ripen. α-Tomatine mediates plant defenses against fungi, bacteria, viruses, and insects. But when consumed and digested, it hydrolyzes to form tomatidine.

The Iowa team hopes to turn tomatidine into a treatment for age-related skeletal muscle atrophy, a condition known as sarcopenia. This ailment is a problem in older people with arthritis or on bed rest recovering from an illness such as cancer or an orthopedic injury such as a broken hip. Sarcopenia is not well defined as a disease, Adams notes, but it annually affects some 30 million Americans over age 60. The inability to regain muscle strength often forces people into rehab facilities or nursing homes.

“Muscle atrophy causes many problems for people, their families, and the health care system in general,” Adams says. “However, we lack an effective way to prevent or treat it. Exercise certainly helps, but sometimes it’s not enough and is often not possible for people who are ill or injured.”

At present, no drugs are approved for sarcopenia. Androgenic steroid hormones such as testosterone promote muscle growth and are a possibility. But they have side effects, including prostate growth in men, excessive hair growth in women, and severe acne, that complicate their usefulness. Scientists are eager to find therapeutic agents that avoid these detrimental effects. The current front-runner is Merck & Co.’s MK-0773. The synthetic steroidal compound, which selectively targets androgen receptors, is in Phase II clinical trials. Tomatidine may soon be a competitor.

The natural product emerged from a computational screening method called the Connectivity Map. Developed by Todd R. Golub and coworkers at the Harvard-MIT Broad Institute in 2006, the approach compares gene-expression signatures characteristic of a particular disease to those induced by small molecules.

The researchers looked for compounds that produced an mRNA expression signature opposite to that of the muscle atrophy signatures, assuming that those compounds would have an inhibitory effect on muscle atrophy. The team first singled out ursolic acid, and now in follow-up work, tomatidine, as strong inhibitors of atrophy-associated gene expression. The compounds rapidly stimulate the anabolic kinase mTORC1, which activates translation of proteins used to build muscle. That mechanism is different from that of Merck’s MK-0773, Adams notes.

“This is interesting research addressing an understudied, common medical problem,” the Broad Institute’s Golub says. He points out that Adams has found an innovative way to use the Connectivity Map. What’s more, “the new compounds seem like a strong starting point for a drug discovery program.”

Adams and his team subsequently found that tomatidine promotes the growth of cultured human muscle cells. They further tested tomatidine by feeding it to mice. Tomatidine prevents muscle atrophy in fasting and immobilized mice and increases muscle mass in healthy mice, the researchers report, making the mice stronger and allowing them to exercise longer.

To accelerate development of ursolic acid, tomatidine, and related compounds, Adams and his colleagues started a biotech company called Emmyon. The company is currently using the compounds as leads in a medicinal chemistry research and pharmaceutical development program led by John J. Talley, a veteran pharmaceutical industry researcher who has headed up drug discovery efforts for products such as Celebrex (celecoxib), a nonsteroidal anti-inflammatory drug.

Emmyon has received a $150,000 Small Business Innovation Research grant from the National Institute on Aging to help kick-start testing and development for treating sarcopenia. “The SBIR program is extremely useful and important because it supports the translation and commercialization of promising discoveries,” Adams says. “The work on tomatidine is a critical first step.”

Beyond treating sarcopenia, Adams envisions that tomatidine supplements could be part of a healthy lifestyle for seniors, improve performance for competitive athletes and weekend warriors, and support the nutritional needs of pets and farm ­animals. Because compounds like tomatidine are in common foods, the Food & Drug Administration often gives them a “generally recognized as safe” designation, he says. “Green tomatoes are safe to eat in moderation, but we don’t know how many green tomatoes a person would need to eat to get a dose of tomatidine similar to what we gave the mice. We also don’t know if such a dose of tomatidine will be safe for people, or if it will have the same effect in people as it does in mice. We are working hard to answer those questions.”

“Tomatidine is the second really exciting development from these researchers on this subject,” says Keith Baar, an expert in skeletal muscle metabolism and exercise physiology at the University of California, Davis.

Americans spend more than $30 billion on nutritional supplements each year, Baar notes, with about 10% of that amount on amino acids that increase muscle growth by roughly 20%. “Tomatidine in animals increases muscle mass by almost 15% over a much shorter time frame,” he says.

“Even though there is still a lot of work to be done, including studying whether tomatidine might work together with amino acids in an additive manner, this is an extremely important finding,” Baar observes. “Because the active ingredient is highest in organic green tomatoes, I would bet that there are a lot of strength athletes who will be growing their own tomatoes this summer and eating them long before they taste good.”