[+]Enlarge
Credit: Shutterstock
Earbuds for dogs: Now Fido can listen to his own tunes. 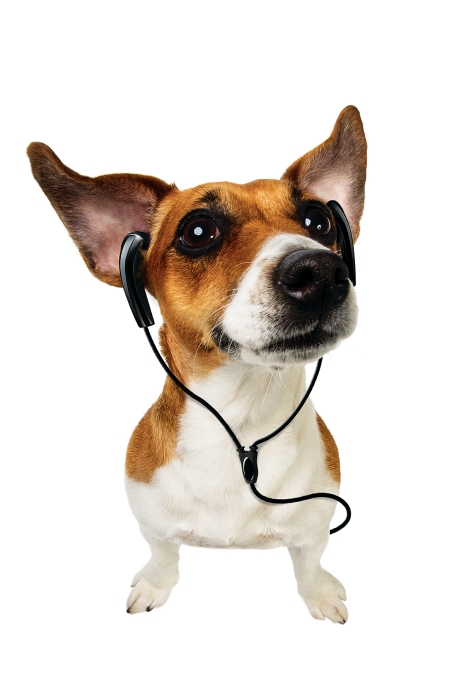 Credit: Shutterstock
Earbuds for dogs: Now Fido can listen to his own tunes.

We humans have a lot of things in common with our animal brethren. But the desire to plug into an iPod, as far as we know, has never been one of them. That’s why the title of a recent paper caught the Newscripts gang’s attention: “Graphene Earphones: An Entertainment for Both Humans and Animals” (ACS Nano 2014, DOI: 10.1021/nn5009353).

Researchers at Tsinghua University, in Beijing, made earphones out of graphene that work via the so-called electrothermoacoustic effect. A layer of the ultrathin, conductive material heats up in response to an electrical current, warming air molecules near its surface that vibrate and generate sound waves. The researchers then packaged their graphene earphones into a commercial earbud casing.

The earphones play sounds over a wide frequency range, from 20 Hz to 1 MHz. Human hearing ranges between 20 Hz and 20 kHz. But dogs can hear up to about 60 kHz, and dolphins up to 150 kHz, making the earphones a perfect cross-species technology.

Tian-Ling Ren, a professor at Tsinghua’s Institute of Microelectronics, says the group’s motivation is to make it easier for people to talk to the animals. “We notice that there is a great interest in bridging human-animal communications and explorations of intelligence and languages in other species,” he says.

To demonstrate, the team recruited the help of a dog owned by one of its members. Over winter break, the researcher trained the dog to stand up in response to a 35-kHz tone. The scientists then placed the earphones on the dog and issued a verbal command to sit. When they played the 35-kHz tone through the dog’s new pair of beats, the dog obediently stood back up.

Ren says the team’s next step is to “try to talk to more animals, such as dolphins, with the graphene earphone.”

For many animals, smell is an even more powerful mode of communication than sight or sound. Now, a team of researchers who study pain have demonstrated how true that is: They found that the smell of men—but not women—could affect the outcome of physiological and behavioral studies done on mice.

The researchers discovered that the presence of a male researcher induces a stress response, but that of a female researcher does not. “Scientists whisper to each other at conferences that their rodent research subjects appear to be aware of their presence and that this might affect the results of experiments, but this has never been directly demonstrated until now,” Jeffrey S. Mogil, a psychology professor at Quebec’s McGill University, said in a press statement. 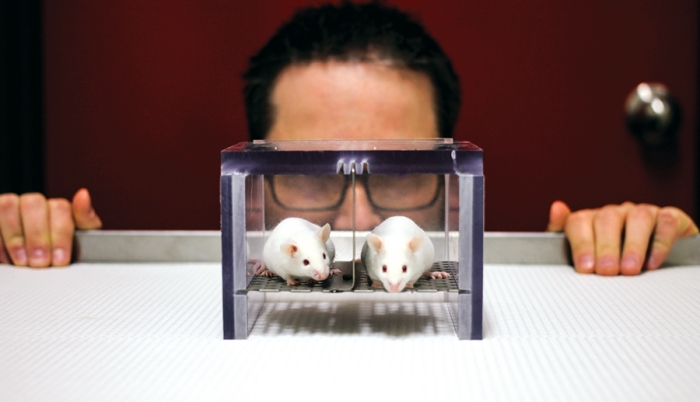 In the study, he and his colleagues gave mice an injection, inducing a pain that triggered a facial grimace. Stress elevates blood levels of corticosterone, lessening pain and thus the grimacing. If a male researcher was seated quietly a half-meter away, the mice grimaced significantly less than when no one was present (Nat. Methods 2014, DOI: 10.1038/nmeth.2935). If a female researcher was watching, there was no change in the grimacing compared with when the mice were in an empty room.

Placing a T-shirt worn by either a man or a woman near the rodents’ cages had the same effect. Pieces of gauze saturated with (E)-3-methyl-2-hexenoic acid, androstenone, and androstadienone—compounds found at greater concentrations in male armpit secretions—also reduced grimacing.

The scientists think this could explain why the results of some animal studies have been hard to replicate. They suggest perhaps the methods sections of papers should report the genders of the experimenters, as well as those of the animals.