When Adah ­Al­mutairi thinks back on the moment she realized nanoparticles might improve liposuction, she sighs and says wryly, “Necessity is the mother of invention.”

STRATEGY
[+]Enlarge
Credit: eLux Medical/C&EN
As shown in this cartoon, during NanoLipo, a solution of gold nanorods is injected into fatty tissue, where it diffuses. When an infrared laser beam shines on the tissue, it heats the nanorods and melts the fat, which is later suctioned out with a needle. 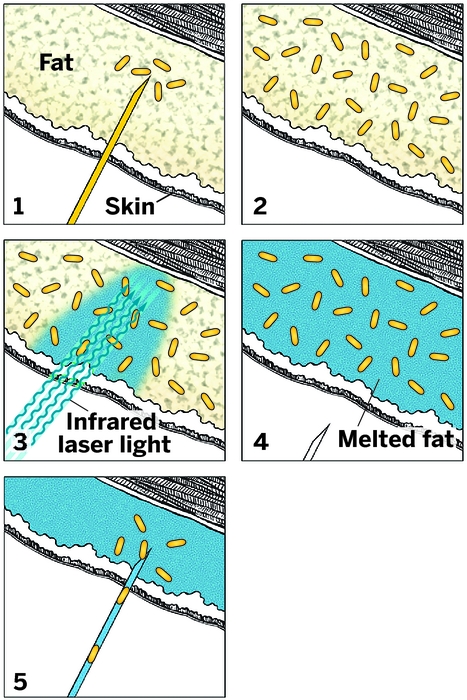 Credit: eLux Medical/C&EN
As shown in this cartoon, during NanoLipo, a solution of gold nanorods is injected into fatty tissue, where it diffuses. When an infrared laser beam shines on the tissue, it heats the nanorods and melts the fat, which is later suctioned out with a needle.

It was three years ago, and the normally physically fit University of California, San Diego, professor was on her way to Cancún, Mexico, for a short vacation. She’d given birth to her son five months prior and had been so slammed with work that she hadn’t had time to regain her usual physique.

“I had about 10 lb to lose,” Almutairi recalls. As she was landing in Cancún with her family, she thought, “If only I could melt this fat so I could wear a bathing suit tomorrow.”

That night, Almutairi went to bed occupied with her wish. When she woke the next morning, she says, a lightbulb went on.

As a nanomedicine expert, the UCSD professor was well aware that gold nanoparticles heat up rapidly when exposed to infrared light. Since the early 2000s, others in her field had been testing whether heating of such particles could be used to kill cancer cells. Researchers were shining tissue-penetrating infrared laser light through skin and onto tumors where nanoparticles had collected. Once the infrared beam hit the particles, electrons on their surface got excited and emitted enough heat to destroy some of the malignant tissue.

“So I thought maybe these gold particles could also be used to melt and remove fat,” Almutairi says.

When she returned from her vacation, she pitched the concept to her brother, a plastic and reconstructive surgeon.

Although liposuction is a well-established technique, it’s also one that has room for improvement, says Khalid M. Almutairi, now a clinical instructor at the University of Nevada School of Medicine. In 2013, it topped the list of surgical cosmetic procedures carried out in the U.S. and brought in more than $1 billion nationwide, according to the American Society for Aesthetic Plastic Surgery. Of the top five cosmetic surgeries, however, liposuction received the lowest rating from patients at the online review site RealSelf. Many complained of extreme bruising, long recovery times, and lumpiness that oftentimes has to be corrected by a second procedure. 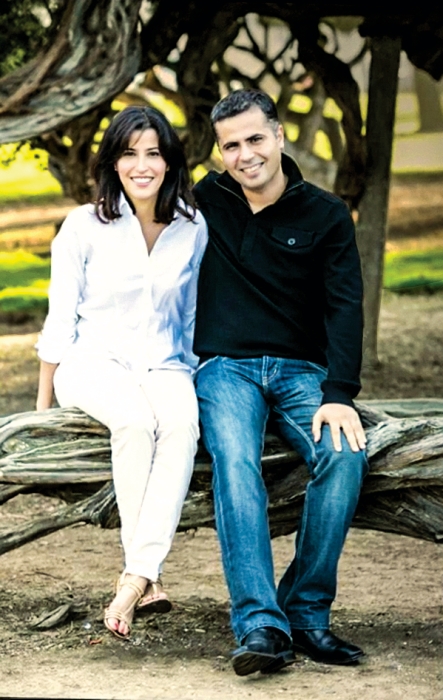 Surgeons have a few types of liposuction to choose from, Khalid explains, but most prefer a mechanical version called suction-assisted liposuction. During this procedure, a physician injects a person’s fat with a large amount of saline solution containing a local anesthetic and a drug, such as epinephrine, to reduce bleeding. Then, a strawlike needle with sharp edges is inserted through an incision, and the surgeon scrapes it back and forth, mechanically breaking up the fat cells and sucking them out of the body.

One of the problems with the technique, Khalid says, is that it isn’t selective about what it removes. Sometimes connective tissues and nerves are removed too.

That’s why he got excited about his sister’s idea. What she was proposing was to melt the fat rather than break it up. The plan was to inject the nanoparticles into the fatty area, fan infrared laser light over it in a controlled fashion, and then simply suck out the melted fat and the particles with a thin needle. Because fat melts at a lower temperature than the one at which connective tissue or nerve cells burn, the strategy “maintains the integrity of the tissue,” Khalid says.

When Almutairi returned from vacation, she and her team began injecting 40-nm-long gold nanorods into butter and bacon. With the help of an 800-nm laser—the type typically used for laser hair removal—the scientists liquefied the fatty substances within a minute or two. With these proof-of-concept studies under their belt, Almutairi and her brother filed a patent with help from UCSD and then set about founding a company to bring the technique, now dubbed NanoLipo, to market. The newly formed firm, San Diego-based eLux Medical, licensed NanoLipo from UCSD and continued with preclinical studies.

Richard Fitzpatrick, a clinical adviser to the company and a laser surgery expert, says the results he’s seen for nanoparticle-assisted liposuction performed on animals have so far been astounding. Typically, liposuction takes anywhere from 45 minutes to two or three hours, depending on whether it’s carried out by a plastic surgeon or a dermatologic surgeon, Fitzpatrick says. “NanoLipo could cut the operative time in half and make the procedure less traumatic.”

According to Chief Executive Officer John R. Lyon, eLux hopes to begin a human clinical trial of NanoLipo later this year. If all goes well, he says, the product could be on the market as early as 2017.

Comments
Nancy Crosbie (June 18, 2014 1:40 PM)
Ii would like to find out how to be a subject for the trial (eLux Medical nanoparticle liposuction article).
Reply »

laurenkwolf (June 19, 2014 11:58 AM)
Hi Nancy, I checked in, and the company told me that enrollment in clinical trials has not started yet. But I'd suggest checking back with eLux in September (johnlyon@eluxmedical.com).
Reply »

Dennis Vernon (July 18, 2014 9:45 AM)
Interesting approach. I'm curious as to the cost to the patient. These type of lasers are not inexpensive. The Nutational
Infrasonic Lipo system (formally distributed as Tickle Lipo) addresses the doctors concerns without the heat so the fat and more importantly the regenerative cells including the mesenchymal stem cells are preserved.
Reply »

Michael Papworth (July 22, 2014 1:45 AM)
I've thought for a number of years that there have to simple solutions to fat removal, that does not involve silly diets and over the top exercise. I also think that there must be a reason why fat builds up in middle age, and nothing seems to stop this process.I don't believe that "middle age spread" is inevitable, as most people believe.
Reply »

Carmen (July 17, 2016 10:30 PM)
Hi love this revolutionary treatment; i would like to be a volunteer for your Nanolipo.
Thanks
Reply »

Damaris Umana (October 11, 2016 8:33 PM)
I would like to be enrolled in the clinical trials. Also, help explain the process in Latin America.
Reply »