Tracing Tau In The Alzheimer’s Brain

TAU TRACER
[+]Enlarge
A rhesus monkey’s brain takes in the radiotracer [18F]N-methyl lansoprazole, as shown in this PET image. 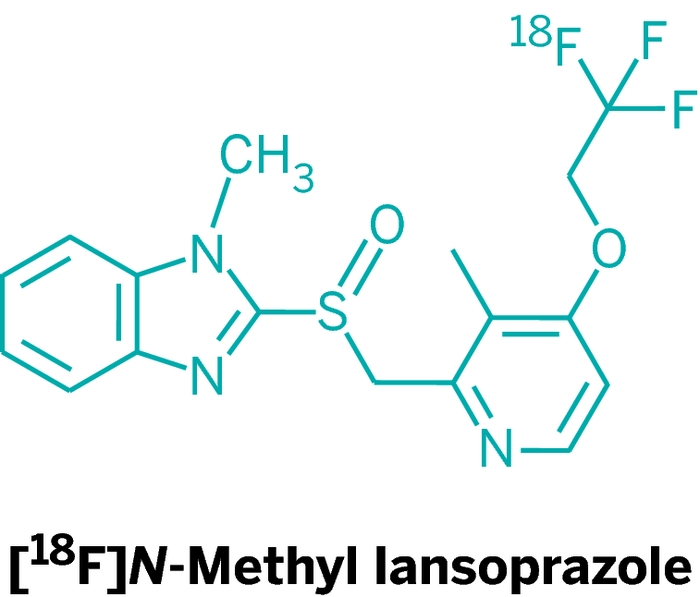 A rhesus monkey’s brain takes in the radiotracer [18F]N-methyl lansoprazole, as shown in this PET image.

By the time a person begins having symptoms of Alzheimer’s disease, it’s usually too late for experimental drugs to have any effect: Irreversible nerve damage has already occurred. To diagnose the condition earlier and possibly intervene, scientists have been designing radiolabeled molecules for positron emission tomography (PET) imaging. Radiotracers that stick to and signal the presence of amyloid-β peptide clumps in the brain have already been approved by the Food & Drug Administration. But tracers that stick to tau protein, another molecule that aggregates in people with Alzheimer’s, are still under development. A research team led by Peter J. H. Scott of the University of Michigan Medical School has now discovered a radiotracer that sticks to clumps of tau more tightly than any previous tracer (ACS Chem. Neurosci. 2014, DOI: 10.1021/cn500103u). At early stages of Alzheimer’s, only small amounts of aggregated tau are present, Scott says. “We’re not sure that the radiotracers out there have a high enough affinity to monitor it.” The researchers demonstrated that not only is their new compound, [18F]N-methyl lansoprazole, selective for tau over amyloid-β, it is also readily taken up into the brains of rhesus monkeys. The team hopes to test the tracer in humans within the next year.