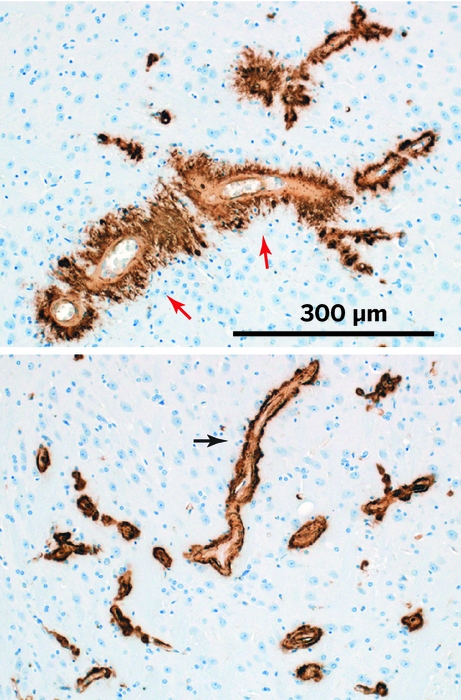 In the past few years, scientists have demonstrated that molecules involved in Alzheimer’s disease behave like the prion proteins that cause mad cow disease. That is, the Alzheimer’s molecules—amyloid-β peptide and tau protein—misfold in the brain and then coerce other molecules to do the same. The misfolded molecules then clump and damage nerve cells.

This observation might have important implications for Alzheimer’s drug discovery, says Kurt Giles, coleader of two new studies confirming the existence of amyloid-β strains (Proc. Natl. Acad. Sci. USA 2014, DOI: 10.1073/pnas.1408900111 and 10.1073/pnas.1408968111). “It’s possible that some therapeutics might be effective against some strains and not others,” says Giles, a neuroscientist at the University of California, San Francisco.

Along with prion pioneer and Nobel Laureate Stanley B. Prusiner, also at UCSF, Giles and coworkers showed that they can pass certain strains of amyloid-β from one lab mouse to another.

In its first study, the team took brain extracts from two deceased Alzheimer’s patients: One had a so-called Arctic mutation in the gene that produces amyloid peptide, and the other had what is known as a Swedish mutation. When the researchers injected these extracts into the brains of mice, they observed the Arctic extract trigger the characteristic formation of fuzzy-looking amyloid clumps and the Swedish extract generate thin, compact clumps. The Arctic aggregates appeared in the rodents’ brains more quickly than the Swedish aggregates.

When the researchers extracted brain tissue from the mice and injected it into the brains of a second generation of rodents, they observed the same onset times and amyloid pathologies for each type of aggregate, thus indicating the existence of strains.

In a second study, the UCSF team made aggregates of two synthetic amyloid-β fragments, one containing 40 amino acids and the other containing 42. In solution, amyloid-β42 clumps into short fibrils, and amyloid-β40 clumps into both long and short fibrils. When injected into the brains of mice, these two solutions induced the formation of small and large aggregates, respectively.

Because amyloid-β40 and amyloid-β42 are different peptides and because the UCSF team didn’t link them to unique molecular structures, it isn’t clear whether they should be called strains, comments Marc I. Diamond, a neurologist at Washington University in St. Louis. But, he says, the team did demonstrate the strain concept by propagating the Arctic and Swedish aggregates from mouse to mouse. Diamond and his team recently proved the existence of tau protein strains (Neuron 2014, DOI: 10.1016/j.neuron.2014.04.047).

Neil Cashman, an expert in protein misfolding diseases at the University of British Columbia, says, “These papers provide compelling experimental support” for the idea that Alzheimer’s precursor molecules act like prions.

Comments
Ed Gehrman (July 7, 2014 9:57 AM)
The PROBLEM with most Government and University informational websites is that no attempt is made to critique the research reports, making it impossible for others to understand the significance of these data. There is much controversy regarding the causality of TSEs. Our research shows that prion amyloid (the TSE research focus for the past 30 years) is the result of a bacterial infection. This controversy directly reflects on Louis Pasteur's efforts to prove that replicating crystals are not the cause of infectious disease, but instead bacteria are the culprits. Too bad we have to rehash this controversy.
More important information can be found at: tseresearchcenter.org

Ed Gehrman (July 7, 2014 2:17 PM)
Abstract
Alzheimer’s disease (AD) is the most prevalent of the neurodegenerative amyloid diseases and is characterized
by accumulation of amyloid-β and tau. Recent studies have indicated that AD may be a brain infection. Although
AD has not been shown to be transmissible, the burning issue is whether the potential infectious causes are the
misfolded amyloid proteins themselves, or an unidentified microorganism. The idea of a replicating protein (prion)
evolved from research on the transmissible spongiform encephalopathies (TSE) represented by Creutzfeldt-Jakob
disease in humans. Prions are now suspect in all of the amyloid related neurodegenerative diseases. However,
the popularized prion theory is controversial since there is convincing evidence that spiroplasma, a wall-less
prokaryote, is involved in the pathogenesis of TSE, and may represent the trigger mechanism. Interest in bacterial
involvement in AD has surfaced from discovery that most bacteria produce biofilm and that components of the
biofilm experimentally induce misfolded amyloid proteins. The recent discovery of H. pylori in AD has brought this
controversy to a head. In this review we will discuss involvement of bacteria as candidate causal agent/s for the
neurodegenerative diseases, and relate the evidence to involvement of spiroplasma in the pathogenesis of the TSEs
as a model for these neurodegenerative diseases.