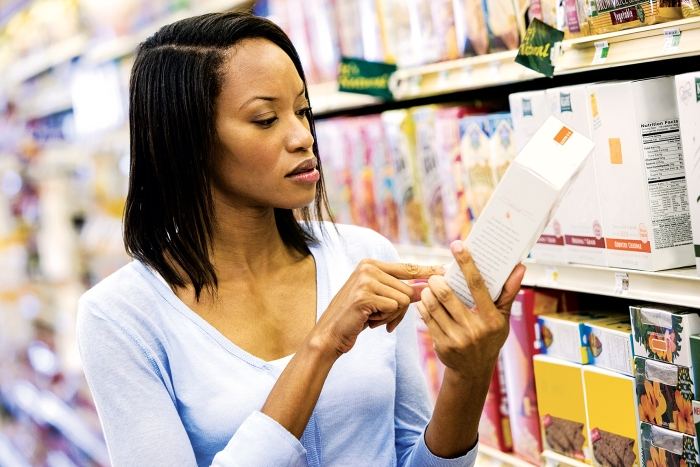 Nutrition science is changing rapidly, but the prominent Nutrition Facts label posted on nearly every food product sold in the U.S. hasn’t been updated in more than 20 years. The Food & Drug Administration thinks it’s time for an overhaul so that consumers have the latest information to make healthy food choices.

FDA proposed significant changes to the nutrition label earlier this year, but the agency is under pressure from stakeholders to withdraw many of them. In particular, the food industry is steadfastly opposed to the requirement to put added sugars on the label. Nutrition experts are also worried that the proposed addition of vitamin D and potassium to the label will lead to overfortification by the food industry.

Other less controversial changes include making the serving size more reasonable—based on what people actually consume, not what is recommended they consume. Americans are eating more than they did 20 years ago, according to food consumption surveys conducted by the Centers for Disease Control & Prevention. FDA is also proposing to put the information about total calories and the number of servings per container in bigger type on the label so that it stands out more.

The proposed label changes could cost food manufacturers about $2 billion, according to FDA estimates. The costs include undertaking a major redesign for certain product labels and minor label changes for others. FDA predicts that some manufacturers will also reformulate their products so that they can continue to make certain health claims and nutrient content claims. Those costs could be less if FDA gives companies more time to comply with the rules. The current proposal gives industry two years to implement the changes. Industry officials are asking for three to five years to help keep costs down. 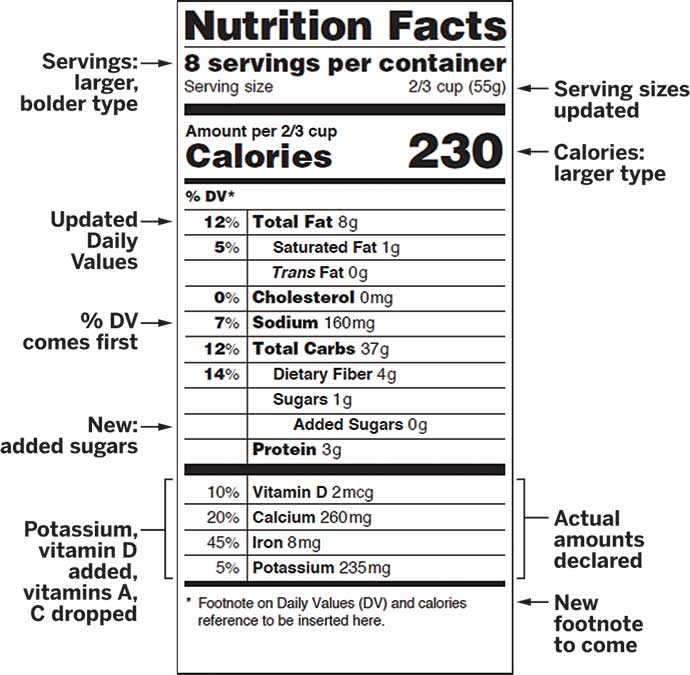 Credit: FDA
FDA plans to revise nutrition label requirements to give consumers information that current research indicates is important to their health.

FDA has received more than 5,000 comments from the food industry, nutrition scientists, consumers, and other stakeholders related to the proposed changes. The overwhelming response prompted the agency to extend the deadline for comments an additional 60 days. That extension ends Aug. 1. FDA also held a public meeting late last month to get further input on the changes.

The goals of the changes are to improve health and wellness and to prevent disease. That message was made loud and clear by Acting Surgeon General Boris D. Lushniak at the start of the public meeting. “We have an issue with cardiovascular disease, cancers, diabetes, obesity and obesity-related diseases, and hypertension,” he said. “Many of these preventable diseases have a direct tie-in to what we take into our bodies.”

“The public health profile of the U.S. population has changed,” says Michael M. Landa, director FDA’s Center for Food Safety & Applied Nutrition (CFSAN). More Americans are overweight and obese than they were two decades ago, he notes.

FDA’s proposal to include added sugars on the label is based on the federal government’s 2010 Dietary Guidelines for Americans, which recommend fewer calories from solid fats and added sugars. FDA believes that giving consumers information about added sugars will “help to reduce extra calories consumed by Americans and to increase the intake of nutrient-dense foods without exceeding total calorie needs,” says Paula R. Trumbo, a team leader in nutrition science at CFSAN.

Leading health experts who support the added sugars label say it will help the general public make healthy choices and reduce the risk of chronic diseases.

“There is compelling scientific evidence that increased consumption of added sugar contributes to obesity, diabetes, and other health problems,” says Frank Hu, professor of nutrition and medicine at the Harvard School of Public Health and Harvard Medical School. The health effects of added sugar go “beyond empty calories to our diet,” he says.

Because there are no analytical methods that can readily differentiate between natural and added sugars, FDA acknowledges that it would need to rely on industry records to verify how much sugar is added to food products.

“It would be difficult, if not impossible, to calculate added sugars or track added sugars through record keeping, especially for yeast-leavened bakery products in which the fermentation process results in overall sugar reduction,” Sanders says. ABA is also questioning FDA’s legal authority to require records for this purpose.

FDA’s proposal to add vitamin D and potassium to the label is also raising concerns. FDA says that Americans are not getting enough of either nutrient, citing the importance of vitamin D for bone health and potassium for preventing hypertension. In addition to including the amounts of the two nutrients on the label, FDA would increase the recommended daily values for each.

Nutrition experts, however, are concerned that the change will drive companies to add vitamin D to an excessive number of products. “Manufacturers may add vitamin D to everything,” Hu warns, noting that it is very cheap. The Academy of Nutrition & Dietetics and CSPI are also concerned about the possibility of too much vitamin D being added to food.

Another change that is getting a lot of attention is FDA’s proposal to lower the recommended daily value for sodium from 2,400 mg to 2,300 mg. That proposed value is the upper limit recommended in a 2013 report by the Institute of Medicine (IOM). Some health advocates are urging FDA to reduce the value further, to 1,500 mg, to better protect the public.

The average American adult consumes 3,400 mg or more of sodium, or about 1.5 tsp of salt, each day, according to IOM. The Dietary Guidelines for Americans advise people older than 50, African Americans, and those with hypertension, diabetes, or chronic kidney disease to limit their intake of sodium to 1,500 mg/day. That group makes up more than 50% of the U.S. population. The recommendations are based on scientific evidence linking sodium consumption with high blood pressure and other risk factors for heart disease.

Other proposed changes, such as increasing the type size for total calories, are generally being welcomed. But some experts warn that emphasizing calories alone will not help consumers choose healthy foods. Calories are important, but “we know that overly emphasizing one component of the diet can have unintended consequences,” Hu says. Overemphasis on calories could lead to underconsumption of high-calorie foods that are healthy, such as nuts, seeds, avocados, and some oils, and overconsumption of less healthy ingredients such as artificial sweeteners or refined starch, Hu says.

Food manufacturers are urging FDA to make the changes to the nutrition panel simultaneously with any other pending food label changes. For example, FDA is considering whether to require a declaration for caffeine that is added to food products and whether to allow the word “natural” on food labels. The agency is also under pressure from various groups to require that ingredient lists be legible and to add phosphorus to the nutrition label for people with kidney disease who need to limit their phosphorus intake. Industry is hoping FDA will synchronize the timing for all upcoming changes.

In general, FDA’s proposal is being welcomed as a step toward encouraging Americans to eat healthier. But some people say giving consumers the facts about nutrients in their food is not enough. The proposed label provides consumers with no sense of what they ought to be eating, says Pepin Tuma, director of regulatory affairs at the Academy of Nutrition & Dietetics. Tuma and others are calling on FDA to opt for an alternative format that informs people what nutrients to eat more of and what to eat less of.

FDA is currently seeking comments on such an alternative format. So far it is being supported by some consumer advocacy groups, but industry groups are generally opposed to it.

One area where both sides agree is that FDA should launch a consumer education campaign to help the public understand why any changes are being made to the nutrition label. The campaign should include a research component that would evaluate consumer understanding, interpretation, and use of the term “added sugar,” and whether declaration of added sugar on food labels impacts healthful eating, says Sarah Ohlhorst, director of government relations at the American Society for Nutrition.

FDA says it has started to undertake such consumer research and that it intends to use the results in its decision-making process regarding changes to the Nutrition Facts panel. It is unclear, however, when that research will be completed.

The agency won’t be taking any action right away. It is likely to take FDA several months to sort through the thousands of comments before it finalizes the rule. Companies will then have at least two years to make the label changes.