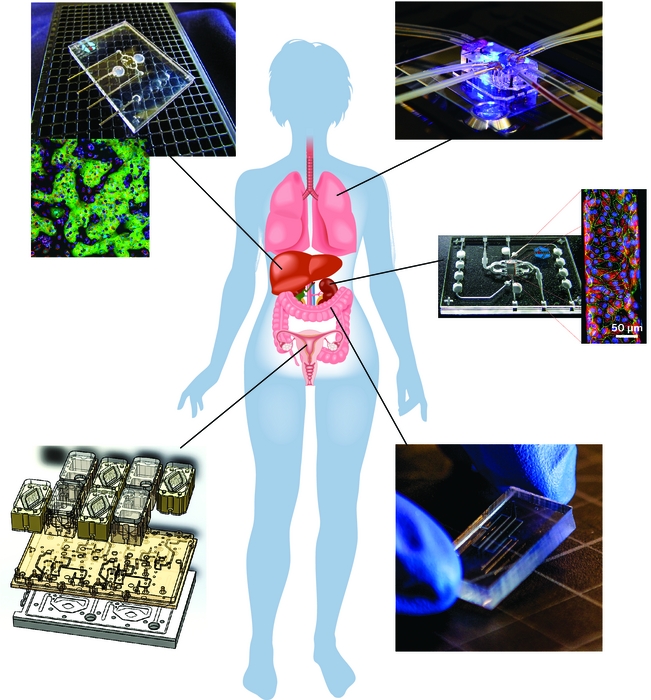 Thanks to advances in materials science, microfluidics, systems biology, and stem cell technology, researchers are making chips that simulate individual human organs. The devices, about the size of a computer memory stick, contain living human cells and are used to study the potential toxicity of chemicals. Pharmaceutical companies are already putting such devices, including lung and liver chips, to work in predicting the toxicity of new drugs. Scientists are also evaluating how to use these chips to screen the toxicity of environmental contaminants and chemicals found in consumer products.

The challenge ahead is getting federal regulators to accept the data from chip-based tests as an alternative to traditional toxicity studies on laboratory animals. To this end, federal officials met with researchers last month at a workshop sponsored by a National Academies committee to explore the benefits and limitations of organ-on-a-chip technology for regulatory applications. These include drug safety assessments and efforts to screen commercial chemicals for possible human health and environmental hazards.

In general, the Food & Drug Administration recognizes the potential for organ-on-a-chip technology to help speed up the drug approval process and get new treatments to patients faster. But the agency says that rather than depending solely on information generated with the devices, FDA will likely combine it with traditional toxicity data when reviewing new drugs. In addition, regulators say the cells used in such devices need to be characterized and the systems need to be validated for reproducibility.

The same holds true for the use of organ-on-a-chip devices to screen the toxicity of chemicals in consumer products and the environment. The Environmental Protection Agency views the technology as a complement to animal studies and high-throughput cellular assays, not as a replacement.

“These tissue chips will always be part of a larger body of evidence,” said Weihsueh A. Chiu, an environmental health scientist with EPA’s National Center for Environmental Assessment. “Even two-year bioassays and large epidemiologic studies are not used in isolation,” he said at the meeting. “No one piece of evidence is ever going to drive a risk assessment or prioritization.”

Much of the excitement for organ-on-a-chip systems was spurred by a $140 million, five-year effort—launched in 2012 by the Defense Advanced Research Projects Agency (DARPA), the National Institutes of Health, and FDA—to develop cell-based microfluidic devices for studying the effects of chemicals and radiation on humans.

As part of that effort, NIH awarded a dozen grants in 2012 to support the development of various individual human organ systems—such as liver, kidney, lung, heart, and intestines—on three-dimensional chip-based devices. They are made from a flexible polymer, such as polydimethylsiloxane (PDMS), and microfabricated to contain hollow micrometer-sized channels lined with human cells and tissues.

The effort has already produced physiologically relevant stand-alone organ chips, said Danilo Tagle, associate director for special initiatives at NIH’s National Center for Advancing Translational Sciences, which is funding much of the work. Over the next three years, efforts will focus on integrating those organ-on-a-chip devices into a human-on-a-chip system, he said. Within 10 years, the goal is to be able to conduct clinical trials on chips, he noted.

For its part, DARPA entered into cooperative agreements with Harvard University’s Wyss Institute for Biologically Inspired Engineering and Massachusetts Institute of Technology to develop platforms that can integrate 10 or more of the organ systems into a body-on-a-chip.

The Wyss Institute teamed up with global manufacturer Sony DADC last year to further accelerate the development of the chips and to scale up production. Wyss also announced last month that it had signed an agreement with start-up company Emulate to commercialize the chips.

Wyss is also working with AstraZeneca to develop animal organ-on-a-chip devices. The animal chips will be tested alongside the human models to help researchers understand whether drug safety data in animals can be used to predict safety in humans.

Each of the devices is designed to accurately model the structure and function of a particular organ. In contrast to static, traditional, two-dimensional cell cultures, organ-on-a-chip devices are designed to simulate mechanical actions in the body, such as breathing or peristalsis, the muscle contractions that move food through the digestive system.

The ability to replicate these mechanical forces allows researchers to test chemicals under more realistic physiological conditions. For instance, tests conducted with the Wyss Institute’s lung-on-a-chip device showed that the process of breathing increases lung barrier permeability and the absorption of chemicals.

As part of the 2012 initiative, NIH also awarded seven grants to study induced pluripotent stem cells, which are stem cells generated from adult cells, and other cells that can differentiate into dozens of specialized cell types. Organ-on-a-chip devices will be populated with these cells. 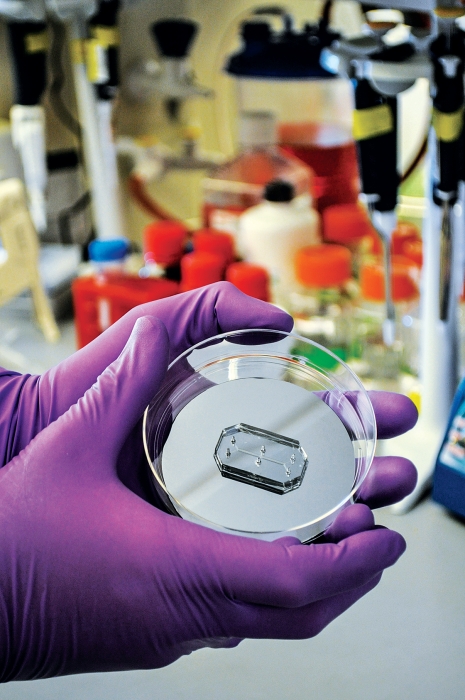 Some of the NIH grants also went to researchers to develop chip-based systems targeted at specific ailments such as cardiovascular disease, arthritis, gastrointestinal disease, and cancer.

FDA’s role in the partnership is to explore how to use organ-on-a-chip technology to assess drug safety. In hopes of accelerating the regulatory approval process, the agency is working closely with researchers who are developing the technologies. Regulators see organ-on-a-chip devices as a promising data-generating tool to use after high-throughput cellular in vitro assays are conducted and before long-term animal studies are performed. The technology could also be applied after completion of a long-term animal study to help determine the relevance of findings to humans, said John R. Bucher, associate director of the National Toxicology Program.

One advantage of the devices is the ability to incorporate complex physiological parameters, such as oxygen tension and physical flow rates, Bucher said at the meeting. In addition, the chips could potentially be used to study the health effects of various chemical mixtures. “You can add chemicals sequentially and adjust the timing of the additions,” which provides more information than do studies on static cell cultures, Bucher said. The chips also give researchers greater insight into the effects of toxicants that accumulate in the body over time, he added.

Despite remarkable advances in the organ-on-a-chip field, these systems still have a lot of limitations, Bucher continued. Slow throughput and the lack of reproducibility and standardization of the models are problems, he said.

Another problem facing researchers is not having enough cellular material to conduct an assay, said Christie M. Sayes, a program manager for nanotoxicology at RTI International. Sayes, who is working on gut-on-a-chip and lung-on-a-chip devices, said researchers need a large enough cell population to validate the assay with additional tests.

Companies such as Cellular Dynamics International are manufacturing induced pluripotent stem cells for use on organ-on-a-chip devices. But “diligence is needed to characterize and standardize cellular products,” said Frank Weichold, director of FDA’s Office of Regulatory Science & Innovation. “Over 100 clinical trials with cellular products in early phases,” he said, are now under way. Weichold said at the meeting, “In all cases, we struggle with the characterization and definition of the material we are dealing with.”

Many of those problems can and will be solved, said Tagle of NIH’s National Center for Advancing Translational Sciences. He expects to see organ-on-a-chip devices used in risk assessments within a year or so. But even then, the data they generate are unlikely to be used in isolation.

That means animal studies will still be needed, at least for now.

“The present gold standard in toxicology is animal testing,” Taylor pointed out. Yet for some organs, studies in animals are only 50 to 70% predictive of effects in humans, he said. To get the public and regulatory agencies to accept the technology, he said, “we have to demonstrate that these new organs-on-a-chip are at least as good as animals.

“If we optimize the tissue engineering, use the right cells in the right organization with the right complexity, the theory is we can do better than animal testing,” Taylor said. But, he added, that will take time.