A look at recent patenting activity in CRISPR/Cas9 gene-editing systems, brought to you by C&EN and CAS

[+]Enlarge
A guide RNA directs Cas9 to the target DNA to be edited. 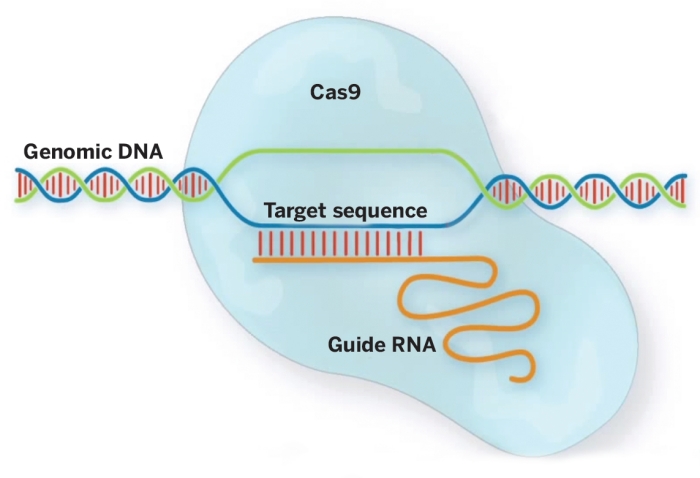 A guide RNA directs Cas9 to the target DNA to be edited.

Bacteria don’t have an immune system like humans do, but they do have a means to track and neutralize invaders’ DNA. To detect the DNA of infecting viruses, for example, bacteria rely on repetitive patterns in noncoding areas of their genomes, called CRISPR (clustered regularly interspaced short palindromic repeats) sequences. When viral DNA binds to such CRISPR sequences, Cas9, a DNA-cutting enzyme, steps in to cut it up. Scientists are now rushing to harness CRISPR/Cas9 as a gene-editing tool. All that is required is pairing an engineered Cas9 enzyme with a small customized RNA that guides Cas9 to the gene to be edited. This makes CRISPR/Cas9 simpler to use than other gene-editing systems such as zinc fingers and TALEN technologies, which require synthesis and design of custom proteins for each target. The CRISPR/Cas9 technology has started a whole lot of dreaming—and a whole lot of companies—aimed at correcting genes that cause disease, protecting crops from disease, and maybe even guarding bacteria involved in food production against infection. Not surprisingly, patenting in this area has surged, according to Chemical Abstracts Service databases. A few of those patents are highlighted here.

Next-generation sequencing technologies have significantly improved our understanding of the genetic factors that underlie Fragile X syndrome, Parkinson’s disease, and other disorders. Gene-editing tools, such as designer zinc-finger enzymes or TALENs, might provide a way to treat these disorders. An engineered CRISPR/Cas9 system described by Feng Zhang of Massachusetts Institute of Technology and the Broad Institute could provide an alternative that’s more affordable, more efficient, and more scalable, Zhang says. Notably, the system can target more than one position in the eukaryotic genome, Zhang reports in a 2014 patent application (U.S. 8697359). The ability to target and slice two or more genes simultaneously in human cells will lead to faster and cheaper therapies for genetic diseases, Zhang claims. Cambridge, Mass.-based Editas Medicine is now commercializing the technology.

Taking advantage of the CRISPR/Cas9 gene-editing system, Harvard Medical School scientists George Church, Prashant Mali, and Luhan Yang developed a method to turn specific genes on or off in human cells (WO 2014099750). The method relies on an engineered Cas9 nuclease and guide RNAs designed to target specific human genes. Using specially designed guide RNAs, they show they can insert base pairs at specific places in a human genome. By tagging the Cas9 enzyme with a fluorescent green protein or other marker, they can even visualize the targeted site to ensure the insertion went as planned. Using this technique, the researchers made various modifications to show that their CRISPR/Cas9 gene-editing systems were site-specific and could be coupled to transcription factors to activate or repress genes in various human cell lines. Egenesis Bio, a start-up the researchers founded, hopes to use this technology to create patient-tailored organs for transplantation and drug screening.

Developing animal models of human disease can take up to a year and require controlled breeding of many generations. Hoping to develop genetically modified animals in a faster, easier, and more cost-effective way, Ralf Kühn and colleagues at Munich’s German Research Center for Environmental Health have employed the CRISPR/Cas9 system to produce animal models of human disease. In a recent patent application (WO 2014131833), the team describes a method for producing a nonhuman mammalian egg cell with a modified target sequence in its genome using a CRISPR/Cas9 system. The genetically modified oocyte is transferred to a female host, and the offspring are analyzed for the presence of the intended modification. This drastically reduces the number of breeding cycles necessary for developing genetically altered animal models of disease, the researchers claim.

Share X
To send an e-mail to multiple recipients, separate e-mail addresses with a comma, semicolon, or both.
Title: Patent Picks: CRISPR/Cas9 Gene-Editing Systems
Author:
Chemical & Engineering News will not share your email address with any other person or company.