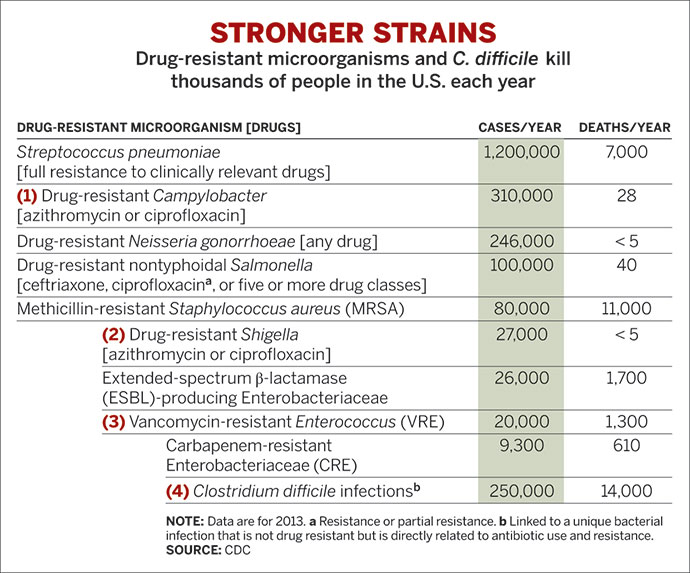 The Obama Administration is ramping up the federal fight against antibiotic-resistant bacteria. These so-called superbugs are linked to an estimated 23,000 deaths and 2 million infections in people each year in the U.S., according to the Centers for Disease Control & Prevention (CDC). White House officials say the situation is a “growing crisis,” threatening national security and the economy. 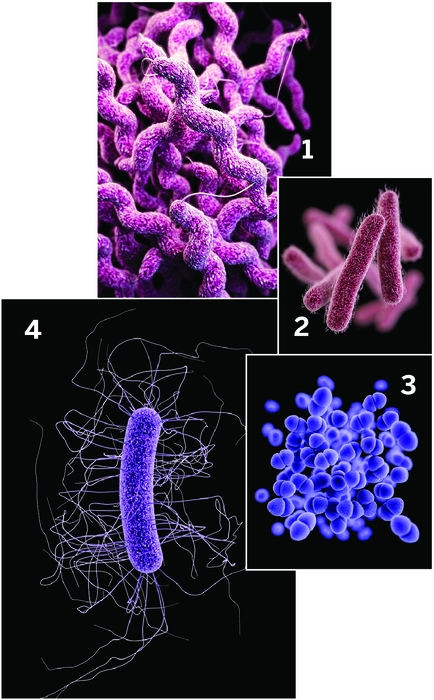 The new efforts, announced in mid-September, include a national strategy to address antibiotic resistance, a directive to federal agencies, and a $20 million prize. Recommendations for addressing the rise of antibiotic resistance from a high-level White House advisory group were also unveiled at the same time.

The actions aim to show that the Obama Administration is serious about curbing the rise of deadly antibiotic-resistant bacteria and beefing up the pipeline of new antibiotics and diagnostics. But some public health advocates say the measures do not go far enough, particularly with respect to reducing the routine use of antibiotics in food-producing animals raised for meat or to produce eggs or milk.

The Administration’s strategy seeks to strengthen U.S. capabilities for identifying and reporting cases of antibiotic resistance by 2020. Enhanced surveillance of antimicrobial resistance will draw on cutting-edge gene-sequencing technology, says Francis S. Collins, director of the National Institutes of Health.

“Specific genetic signatures can be detected within hours to days, enabling us to draw direct linkages to outbreak sources and to track their spread,” Collins and Anthony S. Fauci, director of NIH’s National Institute of Allergy & Infectious Diseases, say in a Sept. 18 blog post.

The White House is calling for the creation of a centralized database that would collect the genetic sequences of drug-resistant microbes. Such a database will make it easier to determine whether a particular strain is new and if not, where and when it was first observed. “Tracking organisms to their sources can be instrumental in their control,” Collins and Fauci write.

The Department of Health & Human Services says it will award a prize of up to $20 million to the first research group that develops a rapid, point-of-care diagnostic tool for identifying drug-resistant bacterial infections in real time. “Having a diagnostic tool of this nature will equip health care providers with a critically needed tool to guide their usage of antibiotics and promote responsible use of antibiotics,” Collins says.

Another goal of the Obama Administration is to accelerate the development of new antibiotics over the next five years to replace the ones that are becoming ineffective. Obama has also ordered a task force—cochaired by the secretaries of the Departments of Defense, Agriculture, and Health & Human Services (HHS)—to submit a detailed action plan by February 2015 for implementing the overall strategy.

At the same time as the White House released the national strategy, the President’s Council of Advisors on Science & Technology issued a report on antibiotic resistance. The report from PCAST, a group of leading scientists and engineers, recommends improving surveillance of antibiotic resistance and more judicious use of antibiotics. The advisers also call on drug manufacturers and the Food & Drug Administration to accelerate the development and approval of new antibiotics.

“It is critical to develop new anti­biotics, diagnostics, vaccines, and other interventions at a rate that outpaces the emergence of resistant microbes,” the report states. “A robust antibiotic pipeline is essential for creating new antibiotics to replace those being steadily lost to antibiotic resistance.”

FDA has approved three antibiotics so far this year that received special designation: dalbavancin in May, tedizolid phosphate in June, and oritavancin in August. All three antibiotics are approved for treating bacterial skin infections in adults, including methicillin-resistant Staphylococcus aureus (MRSA) infections.

In general, public health groups say they are encouraged by the Obama Administration’s level of engagement in the growing threat of antibiotic resistance. But some groups and lawmakers say not enough is being done to ensure antibiotics are used sparingly.

One area in particular that remains contentious is the use of antibiotics in animal agriculture. Many commercial operations still feed low doses of these drugs to animals such as chickens and cows to spur their growth and prevent diseases.

Keep Antibiotics Working, a coalition of consumer groups, says the recommendations on agricultural animal practices from the President’s advisers “fall dangerously short.” PCAST recommends a wait-and-see strategy instead of addressing “overuse of antibiotics for disease prevention and the farming practices that create the need for them,” the group says.

Rep. Louise M. Slaughter (D-N.Y.), a microbiologist, also expressed disappointment with the PCAST recommendations. She says FDA will continue to rely on pharmaceutical companies to voluntarily change the labels on their antibiotics to curb antibiotic use in food animals.

Last year, FDA asked pharmaceutical companies that make therapeutics for animals to change drug labels so that medically important antibiotics can’t be used to spur animal growth. But the agency stopped short of requiring companies to do so.

“Asking industry to change labels is not enough to protect human health,” Slaughter says. She has introduced H.R. 1150, a bill that would restrict eight critical classes of antibiotics so they are used only for treating disease.

Commissioner Hamburg defended FDA’s approach. All 26 manufacturers of antibiotics for food-producing animals have agreed to change their labels so that their products can’t be used for growth promotion, she says. Already, companies have voluntarily withdrawn 31 products from the market. Two firms have implemented label changes, she says. “We will be working with the other companies to make sure that they do so as well.”

FDA is also working to ensure that all medical uses of antibiotics in food-producing animals take place under the supervision of a veterinarian, Hamburg adds.

Antibiotic resistance is “one of our most pressing global public health threats,” says Jesse L. Goodman, an infectious disease specialist and professor of medicine at Georgetown University School of Medicine. Goodman, formerly the chief scientist at FDA, cochaired the task force that issued the first U.S. action plan on antimicrobial resistance in 2000. Antibiotic resistance is not just a problem in the U.S., Goodman stresses. “Global action and partnerships are essential.

“Success will require a sea change,” Goodman continues. “Doctors, farmers and agribusiness, health systems, and the public all need to think totally differently about antibiotics,” he says. Antibiotics are precious resources, he adds. “We must reduce their inappropriate use.”

The actual use—proper or not—of antibiotics is the most important factor leading to antibiotic resistance around the world, according to CDC. Antibiotics are some of the most commonly prescribed medications for people. CDC estimates that up to 50% of all the antibiotics prescribed for people are not needed or are not effective.

The exact amount of antibiotics used for growth promotion in food animals is unclear, but such practices are being phased out. “It is essential now to ensure that antibiotic use in animals is really reduced,” says Allan Coukell, senior director of drugs and medical devices at the Pew Charitable Trusts, a nonprofit advocacy group. When given to food animals, he says, such drugs need to be “administered only in medically appropriate ways under the supervision of a veterinarian.”

Coukell calls the situation urgent. “Resistance to antibiotics costs tens of thousands of lives each year,” he says, “with too many patients finding themselves with no options to fight life-threatening infections.”

Pharmaceuticals
WHO shuns use of antibiotics in healthy animals
Environment
FDA requires antibiotics sales data by species
Pharmaceuticals
Food & Drug Administration Seeks Data About Antibiotics Given To Cows, Pigs, And Poultry
Share X
To send an e-mail to multiple recipients, separate e-mail addresses with a comma, semicolon, or both.
Title: Battling Drug-Resistant Bacteria
Author: Britt E. Erickson
Chemical & Engineering News will not share your email address with any other person or company.