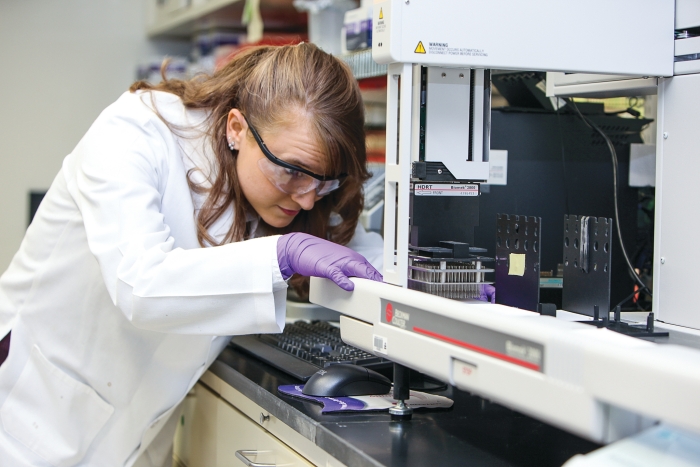 High-throughput methods for predicting toxicity of chemicals have been on the radar of federal regulators for more than a decade. But so far, results of these studies have not been used in decisions about regulating substances.

The Environmental Protection Agency is getting close, however, to accepting data from a few of these methods in its program for screening chemicals for their ability to disrupt the human endocrine system. EPA officials are optimistic that once such data get into the hands of regulators, high-throughput methods will spread to applications beyond just screening chemicals for estrogen- and androgen-like activity.

“The tide is turning,” says Robert J. Kav­lock, deputy assistant administrator for science in EPA’s Office of Research & Development and the agency’s interim science adviser. Kavlock was previously the head of EPA’s National Center for Computational Toxicology (NCCT), where he spearheaded a program in 2007 called ToxCast for rapidly predicting the toxicity of chemicals.

The ToxCast program has screened more than 2,000 chemicals for biological activity using about 700 high-throughput biochemical and cell-based assays such as those widely used in the pharmaceutical industry. The assays cover numerous cell responses and about 300 signaling pathways. The program’s goal is to integrate the results with in vivo animal toxicity data and chemical structure-activity information using computational models for predicting the toxicity of chemicals.

“When we first started out, there were a lot of naysayers,” Kavlock recalls. But various government agencies and research groups are now considering different ways they can apply the technology, he says.

High-throughput assays, such as those used in the ToxCast program, combined with computational models have the potential to supply some hazard data for the tens of thousands of chemicals in commerce, says Jim Jones, EPA assistant administrator for chemical safety and pollution prevention. Jones oversees EPA’s safety evaluations of pesticides and commercial chemicals.

About 84,000 chemicals can be used in industrial or commercial applications in the U.S., but Jones estimates that only about 20,000–30,000 are in commerce at any given time. EPA has hazard information for only a few thousand of those chemicals, he says. Data on exposure are scarcer than hazard information and are often estimated on the basis of how much of a substance is sold in the U.S., he says.

EPA sees the greatest potential for applying results from high-throughput methods in quickly deciding which chemicals should be the first to get further scrutiny from the agency. EPA hopes the tools will evolve in a way that allows the agency to rely more on them and less on animal-intensive in vivo testing, Jones says. The agency’s next use of these data is likely to be in its Endocrine Disruptor Screening Program (EDSP).

Development of endocrine disruption tests began in the late 1990s. It wasn’t until 2009, however, that EPA officials were confident enough in the tests to require industry to use them to screen chemicals for their potential to disrupt the endocrine system. That year, EPA directed manufacturers to screen 67 chemicals, mostly pesticides, through a battery of 11 assays, some in vitro and some in vivo.

“The tools that were available at the time in the computational space were not sophisticated enough,” Jones says. “So we developed a more traditional model to screen compounds for estrogen, androgen, and thyroid activity.”

SEE-THROUGH RESULTS
[+]Enlarge
Credit: Robert Tanguay, Oregon State University
Zebrafish, which grow rapidly and are about 4 mm long, are being used to test the effects of chemicals in living organisms. 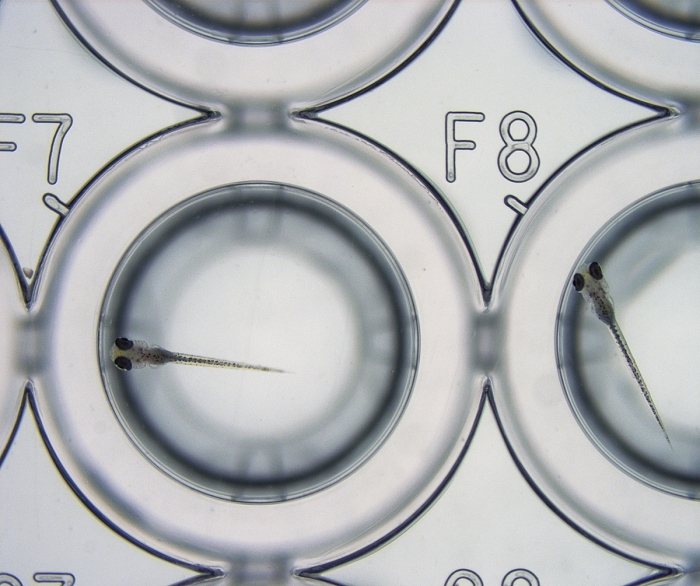 Credit: Robert Tanguay, Oregon State University
Zebrafish, which grow rapidly and are about 4 mm long, are being used to test the effects of chemicals in living organisms.

EPA finished evaluating the test results for the first batch of compounds this year. Manufacturers of 15 of the chemicals, which previous tests showed were the most estrogenic in the group, voluntarily pulled their pesticide formulations off the market rather than conduct the EDSP assays. The remaining 52 chemicals showed little estrogenic activity, says David J. Dix, who leads the endocrine disruptor program at EPA as director of science coordination and policy. EPA has ToxCast data on about half of the second list of chemicals, and those show little endocrine activity as well, he says.

Altogether, some 1,200 pesticide active ingredients and a couple thousand inert ingredients are required by law to be screened under EDSP. “Obviously, this pace is not going to get us where we need to go,” Jones acknowledges.

To this end, EPA plans to hold a meeting of its pesticides Scientific Advisory Panel next month to discuss whether ToxCast assays can replace five of the 11 tests required under EDSP. Three of those five tests are in vitro, including an estrogen receptor binding assay, an estrogen assay that detects transcriptional activation, and an androgen receptor binding assay. The other two are in vivo animal tests, one for detecting estrogen agonists on the basis of effects in the uterus and another called the Hershberger assay, which detects androgen agonists and antagonists.

Challenges remain for replacing the other six assays required under EDSP. The test for thyroid disruption, for example, does more than just determine whether a chemical binds to a cell’s thyroid receptor. “There are multiple, diverse mechanisms that play a role,” says Russell S. (Rusty) Thomas, director of NCCT, who is currently leading the ToxCast program. Data suggest that most of the thyroid activity of chemicals is not due to agonist or antagonist actions, Thomas notes. EPA doesn’t have in vitro assays that probe all of the mechanisms involved in thyroid disruption.

Another barrier to regulatory acceptance of high-throughput assays is that the tests don’t incorporate metabolism information. Before joining EPA last year, Thomas retrofitted high-throughput assays to provide metabolism data, work he did as a director at the Hamner Institutes for Health Sciences, a nonprofit research organization focused on chemical and drug safety. He expects to invest NCCT resources to develop additional approches during this fiscal year through internal research at EPA and an upcoming challenge for the broader scientific community, he says.

The goal of this work is to develop assays that can pick up metabolites that are more toxic than their parent compounds. Current high-throughput assays detect what happens in cells only when they are exposed to a chemical, not its metabolites. It is unclear how many compounds are inactive in the body but have bioactive metabolites.

One way around this metabolism problem is to test animals with short developmental times, such as zebrafish. These creatures grow rapidly, developing from a fertilized egg to a fish in about five days. The throughput of zebrafish tests is much greater than that of rodent studies but slower than that of cell-based assays.

Robert Tanguay, a toxicologist at Oregon State University, has spent two decades developing what he calls a zebrafish sensor. In his model, zebrafish embryos are exposed to various compounds or mixtures of compounds at six hours after fertilization. At 24 hours, the embryos are hit with a pulse of light and monitored for spontaneous motion. When the zebrafish are five days old, the researchers look for developmental malformations, such as a tail deformity called notochord distortion, and motor responses.

The zebrafish model “tells you that development is perturbed. It doesn’t tell you how,” Tanguay says. But it could be useful as a primary screen. “We may be able to fly through these compounds, then go back and evaluate the hits in more detail,” Tanguay says.

Zebrafish are small enough to fit individually inside the wells of a 96- or 384-well laboratory plate. They are transparent, making it easy to observe adverse effects. Scientists are also using other small animals, such as the roundworm Caenorhabditis elegans, to develop new toxicity tests.

These and other alternative approaches for testing the toxicity of chemicals are advancing at an accelerated pace, and regulators are starting to take notice. For example, the Food & Drug Administration is evaluating the use of high-throughput methods for identifying bioactive, food-relevant chemicals, including ingredients that are generally recognized as safe, food additives, and chemicals in food packaging.

The Department of Homeland Security is also considering such assays to enhance its ability to identify and assess potential chemical threats. DHS is looking for a rapid way to evaluate thousands of chemicals, using limited resources, for their potential hazard and risk to human populations.

But for now, in terms of regulatory purposes, the technology appears to be limited to endocrine disruptors. “Realizing the full potential of these new approaches will take a village,” says Jennifer McPartland, a health scientist with the activist group Environmental Defense Fund, and colleagues in a commentary published on Oct. 24 in Environmental Health Perspectives (DOI: 10.1289/ehp.1408601). The scientists suggest that EPA host collaborative workshops and seek out mutually beneficial research partnerships to strengthen the science underlying its chemical testing efforts and to gain more support for those efforts within the scientific research community.

Persistent Pollutants
Goodbye to some PFAS in food packaging
Pollution
Satellites can now see air pollution inequality within cities
Pollution
Mercury makes it deep into marine trenches
Share X
To send an e-mail to multiple recipients, separate e-mail addresses with a comma, semicolon, or both.
Title: Toxicity Tools Coming Of Age
Author: Britt E. Erickson
Chemical & Engineering News will not share your email address with any other person or company.