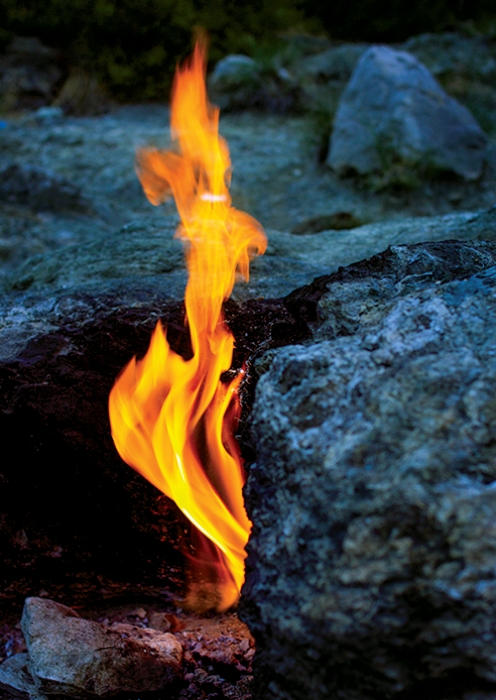 For thousands of years, the Chimaera fires have burned near the ancient chromium mines of Cirali, Turkey. Flames leap from small fissures in the rocks at Los Fuegos Eternos in the Philippines. At these and other sites around the world, natural gas is produced by geological means without the aid of biological actors such as microbes. The fires from this gas have come to be known as eternal flames. Research by Giuseppe Etiope of Italy’s National Institute of Geophysics & Volcanology and his team now suggests that ruthenium-catalyzed Fischer-Tropsch chemistry could be responsible for these abiotic methane seeps (Geofluids 2014, DOI: 10.1111/gfl.12106).

Ruthenium is a rare element, but it reaches parts-per-million concentrations in certain Cr-bearing minerals. Etiope noticed “a geographic coincidence between the occurrence of Ru-rich chromitites and methane.” Purified and pretreated Ru is known to catalyze the reaction of carbon dioxide and hydrogen to produce methane and water, and hydration of nearby peridotite minerals is known to produce hydrogen gas, so Etiope wanted to know if dispersed Ru in the chromitite could be responsible for the methane evolution.

The team loaded Ru oxides onto titanium dioxide and aluminum oxide supports at similar concentrations as in the chromitite minerals and placed them into sealed bottles with H2. “The most unexpected result was the amount of methane that rapidly appeared in the glass bottles,” Etiope tells Newscripts. Generally, he explains, methane forms abiotically at temperatures above 200 °C. But by using a few micrograms of Ru catalyst, methane formed in a day or two at temperatures below 100 °C, even at room temperature.

Etiope is planning future studies that may demonstrate Ru-containing minerals are effective catalysts in their natural settings. The work would include investigation of other chemical forms of Ru, such as sulfides, and trials in moist conditions.

The results might be bad news for alien hunters, however. Ru has been found on martian meteorites, and if the element can catalyze methane production under mild conditions, that could explain the presence of the molecule on Mars—without invoking little green microbes.

Although fire is a solid bet for catching the attention of most students, video games can also be a draw. That’s part of why a team at the University of Texas, Dallas, built “Polycraft World,” an add-on to the popular game “Minecraft.”

In “Minecraft,” players mine, harvest, refine, move, and otherwise manipulate torso-sized blocks of virtual materials to build … well, anything. Players can fight enemies and other players with the things they construct, or they can build worlds and just play in them. In one notable example, a group of players built a full-scale replica of the USS Enterprise from “Star Trek: The Next Generation.”

[+]Enlarge
Credit: www.minecraftskins.com
Off to the mines: Injection molders and flamethrowers, all in a pixelated day’s work. 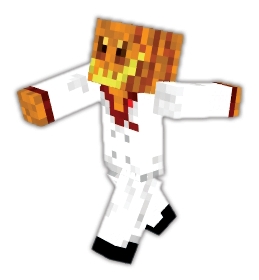 Credit: www.minecraftskins.com
Off to the mines: Injection molders and flamethrowers, all in a pixelated day’s work.

“Polycraft World” adds a wealth of new substances for players to work with and enriches the chemical and materials science detail of existing ones. The modification, or mod as it is known, also adds tools, including distillation columns and injection molders. All of this allows players to create new items such as pogo sticks, jet packs, scuba gear, and flamethrowers—once they’ve figured out how to engineer the plastic parts, refine the petroleum fuel, and so on.

Materials science and engineering professor Walter E. Voit, who developed the mod with chemistry professor Ronald A. Smaldone and UT Dallas students and alumni, says, “Using our ‘Polycraft World’ mod, people of all ages will have an opportunity to navigate materials science, including metallurgy and polymer chemistry, in a fun, creative, self-paced environment.”