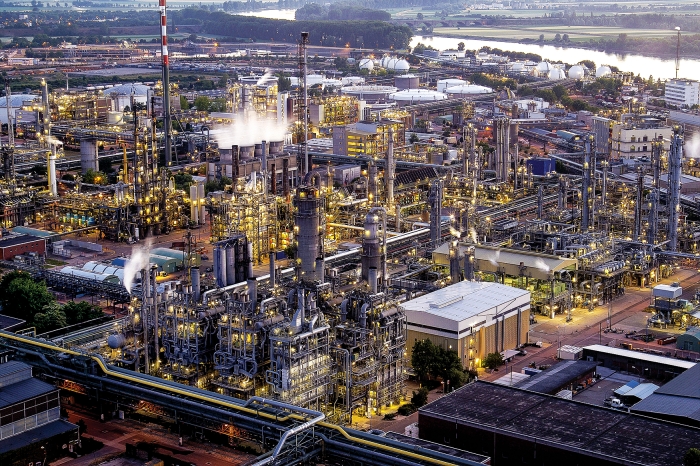 Credit: BASF
A cracker at BASF’s site in Ludwigshafen, Germany.

The European chemical industry’s share of the global chemical market has shrunk from 32% in 1993 to 17% in 2013, and the decline won’t be checked unless a series of far-reaching measures is put in place, according to a report by the British advisory firm Oxford Economics.

The report, which also found an erosion in Europe’s export share, was commissioned by CEFIC, Europe’s largest chemical industry association. It found that the European industry is losing ground because of a drop in competitiveness versus other world regions. The erosion is most apparent in petrochemicals and polymers, the report found.

Oxford Economics concluded that the decline can be turned around only with the introduction of a new European energy policy and a hike in R&D. Instituting these and other European Union policy changes could add $43.5 billion annually to the sector’s income, helping it hold on to its share of the global chemical market, the advisory firm found. Such initiatives would also create more than a half-million new jobs over the next 15 years.

The most important near-term initiative is the introduction of a “coordinated, competitive energy policy” featuring a single European energy market that would replace the currently fragmented one, according to Oxford Economics. Such a policy would help reestablish the industry’s competitiveness, relaunch investment, and stimulate innovation, said Jean-Pierre Clamadieu, Solvay’s CEO and newly appointed CEFIC president, at a press briefing in Brussels.

The exploitation of shale gas in Europe also could help boost the sector’s competitiveness, but it is banned in some countries and severely limited elsewhere. VCI, Germany’s main chemical trade association, claims Germany needs to exploit shale gas to reverse an erosion of competitiveness against the U.S., where cheap gas is abundant. “An early decision on the exploration of local shale gas deposits would be an important signal for the attractiveness of Germany as a location for industry and chemistry,” says Utz Tillmann, VCI’s director general.

Overhauling the EU’s approach to public R&D spending, meanwhile, would have a major long-term impact on the European industry’s competitiveness, Oxford Economics found. In its summary of the report, CEFIC bluntly calls for diverting public R&D money from academia into industry.

“Other world regions invest 18% of public money into basic research and the rest in innovation; the opposite happens in the EU,” CEFIC states. The “EU must decide on its strategy: knowledge creation only or reaping its benefits and turning them into European growth.”

But European academics see a funding shift as the wrong answer to industry’s problems. “I believe that truly excellent fundamental science is essential to drive industrially relevant research for new and improved products and processes,” says Pratibha L. Gai, professor of chemistry and physics at the University of York, in England. She argues for directing fundamental research in academia to wider objectives by working closely with industry partners.

Rather than shift funding, Andrew Walker, director of the School of Materials at England’s University of Manchester, suggests shifting the kind of research conducted in academia. “Research can be split into invention, process, or analysis,” he says. “I suggest that 80% of academic investment is in analysis. We need to discover new materials rather than study old ones.”