Medical Professionals Call For Regulation Of Claims That Cosmetics Are Hypoallergenic

Assertions on product labels are not backed up by scientific data 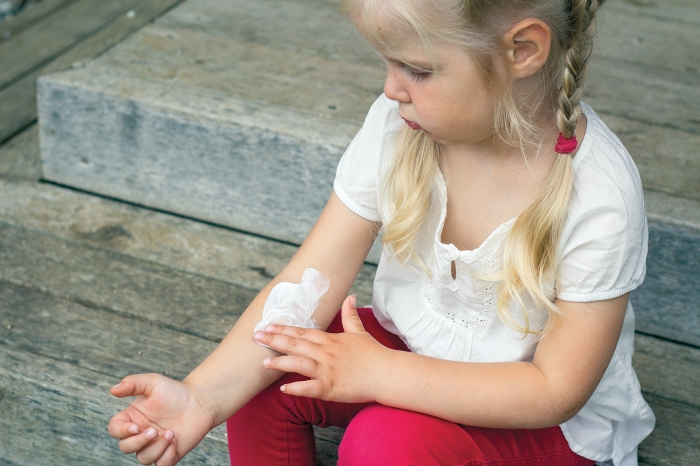 The list of ingredients found in body lotion, shampoo, and other personal care products can be overwhelming for a consumer to read. This is particularly true for people suffering from allergic skin rashes who are trying to figure out what chemical is causing them to break out or itch.

Marketing words such as “hypoallergenic” are found on many products, especially cosmetics, but these terms are of little help to consumers. These words seem to imply that the products are less likely to cause allergic reactions than competing items. But the Food & Drug Administration says no scientific evidence backs up those claims.

Recent work led by Carsten R. Hamann, a medical student at Loma Linda University School of Medicine, in California, confirms that the hypoallergenic label on many personal care products, particularly those marketed for children, is meaningless. The researchers find that many products labeled as hypoallergenic contain at least one known skin allergen.

In a letter to the editor published last month in the Journal of Allergy & Clinical Immunology (2014, DOI: 10.1016/j.jaci.​2014.​07.066), the researchers call for regulation of the terms “hypoallergenic” and “dermatologist recommended” on product labels.

Hamann and colleagues analyzed 187 personal care products intended for children from six retailers in California. They looked for 80 common allergens, including fragrances, preservatives, and surfactants. All of the products were labeled “hypo­allergenic,” “dermatologist recommended/tested,” “fragrance free,” or “paraben free.” The products included shampoos and conditioners, sunscreens, diaper creams, and “anything marketed toward kids that was supposed to be used on skin,” Hamann says.

Of the products studied, 89% contained at least one chemical known to cause contact dermatitis and 11% contained five or more contact allergens. The most frequently found allergen was the surfactant cocamidopropyl betaine, which was found in 24% of the products. Other common allergens were the antimicrobial propolis/beeswax in 19% of products, the preservative phenoxyethanol in 18%, the antioxidant and skin conditioner tocopherol in 13%, and the preservative DMDM hydantoin in 13%. 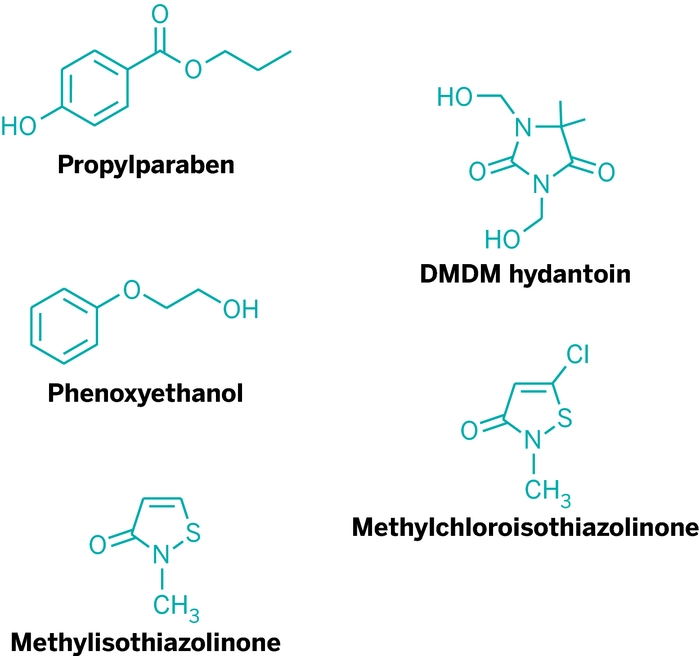 Methylisothiazolinone, a highly allergenic preservative, showed up in 21 of the 187 products. “There is very good data from Europe showing the proliferation of use of methylisothiazolinone as a preservative,” Hamann tells C&EN. The chemical was first used in occupational settings in liquid paints, especially water-based paints used in sprayers, he says, and has worked its way into consumer products.

Methylisothiazolinone has become so widespread that in 2013 it was selected as the “allergen of the year” by the American Contact Dermatitis Society, a group of health care professionals. The preservative “is about to be banned from cosmetics in the European Union because of severe cases of allergic contact dermatitis,” Hamann and colleagues write.

Use of methylisothiazolinone in cosmetics increased about 10 years ago when consumers began asking for products that do not contain paraben preservatives. Parabens have been associated with endocrine disruption and developmental and reproductive problems, as well as allergic reactions.

Methylisothiazolinone, however, is more allergenic than parabens, Hamann asserts. But because of consumer backlash to parabens, manufacturers turned to methylisothiazolinone as a substitute. “These products need a preservative,” he says. “When you open shampoo you don’t want a layer of fuzz and microorganisms growing in it.”

Many preservatives, as well as fragrances and other chemicals in cosmetics, are potent allergens to a small percentage of people, according to the North American Contact Dermatitis Group, a standards-setting organization composed of physicians.

But if a consumer suspects a particular chemical is causing an allergic skin reaction, avoiding that ingredient can be a challenge because many chemicals are marketed under five or six different names, Hamann says. “It becomes very difficult for a consumer to wade through an ingredient label,” he says. For the 80 allergens that the researchers analyzed, there were about 500 different names, he adds.

Hamann and colleagues are calling on FDA to regulate marketing terms such as hypoallergenic and dermatologist-tested to help patients with conditions such as dermatitis avoid products that contain skin sensitizers.

Because FDA has no standards or definitions for such terms, hypoallergenic “means whatever a particular company wants it to mean,” according to the agency.

FDA attempted to regulate the term hypo­allergenic in the 1970s. At that time, the agency established testing requirements to demonstrate which products can be labeled hypoallergenic. But cosmetics manufacturers opposed the extra requirements, saying the expensive tests would pose an undue economic burden on them.

Almay and Clinique, two makers of hypoallergenic cosmetics, challenged the regulation, claiming that FDA did not have the legal authority to issue it. A trial court ruled in favor of FDA, but a federal appeals court later struck down the regulation.

Ever since that 1977 appeals court decision, the term hypoallergenic has had no real meaning in the marketplace, FDA says. Consumers have had to rely on labels to determine if there are differences between products marketed as hypoallergenic and those that are not. Sorting through the list of ingredients on cosmetics is a complicated task for many, Hamann says.

But cosmetics companies remain staunchly opposed to such testing requirements. Companies have been using the term hypoallergenic on products since the 1950s without having to provide data to FDA to back up the claim.

“The appropriateness of the use of the term hypoallergenic is determined on the product as a whole, not on individual ingredients,” says Beth Lange, chief scientist of the Personal Care Products Council, an industry trade group. Although the term hypoallergenic does not have a standardized meaning in the industry, cosmetics companies evaluate products that carry the hypoallergenic label for their potential to induce skin irritation or sensitization, she says.

Allergic reactions to ingredients in cosmetics occur in only a small percent of the population. And although more than 4,000 chemicals used in cosmetics are potential allergens, reactions to most of them are extremely rare.

Nonetheless, some companies are voluntarily removing allergens from personal care products. In 2011, for example, Johnson & Johnson committed to removing potentially harmful chemicals, including two preservatives—DMDM hydantoin and quaternium-15—from personal care products by the end of 2015. Both chemicals release formaldehyde, and they are also allergens. The company stopped using these compounds in response to consumer pressure against ingredients that release formaldehyde.