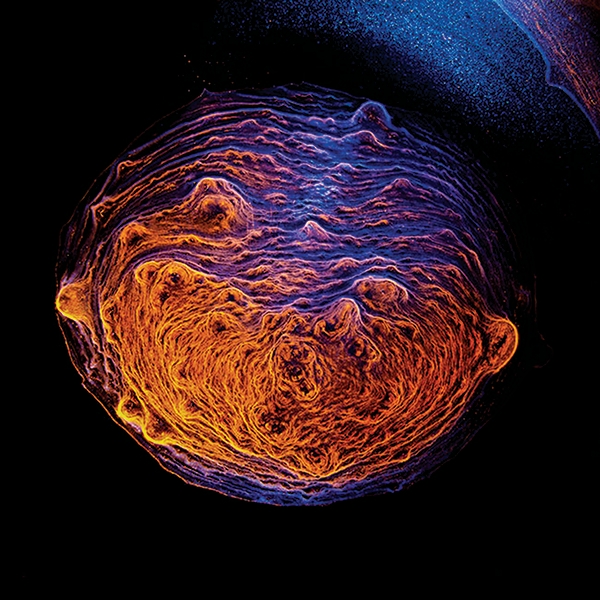 The night of Christmas Eve—if you count every time zone on Earth—Santa Claus is on the clock for about 40 hours straight. So why not have something special waiting for him when he swings by?

Across the pond, Scots leave out a bit of whiskey. If you fall in line with them, you might find something surprising in the morning. At least, Phoenix-based photographer Ernie Button did. Loading the dishwasher, he noticed his whiskey glass displayed a residue so strange that it inspired the photo series “Vanishing Spirits—The Dried Remains of Single Malt Scotch.”

The Scotch had left wispy ridges and rings as it dried. For years afterward, Ernie would dry drops of Scotch into glasses and photograph what was left behind. Then he decided to actually get to the bottom of the residual art.

He found a Nature paper about the coffee-ring effect, describing how drops of coffee leave a circle around the rim of the droplet as they dry (2011, DOI: 10.1038/nature10344). The phenomenon boils down to fluid flow within the droplet pushing suspended particles outward. The authors entertained Button’s questions but couldn’t fully explain the elegant evaporation of the Scotch.

Some Internet sleuthing led Button to Princeton University professor Howard A. Stone. Button was surprised when his cold call received a response, but, he says, “You never know unless you ask.”

Stone ran with the idea. “It’s not unlike me,” Stone admits. He once wrote a paper on the shape of a jump rope mid-swing because he and his postdoc were curious about it.

Stone, postdocs Hyoungsoo Kim and François Boulogne, and past group members recently gave a talk about their side project on the whiskey-drying phenomenon. Over the course of nearly two years, trial, error, and analysis of the whiskey-manufacturing process led them to mix water, ethanol, a surfactant, and a polymeric component with solid particles, which ultimately yielded patterns close to those Button observed. They believe the key to the phenomenon lies in the polymer creating a film on the glass substrate that lets the particles deposit more evenly, rather than at the edges like coffee.

Button and Stone are each still working on their “neat” projects.

Of course, there’s no shame in leaving good ol’ milk and cookies out for Mr. Claus, and Fereidoon Shahidi, Adriano Costa de Camargo, and coworkers at Memorial University of Newfoundland might have a healthy twist for your favorite recipe. 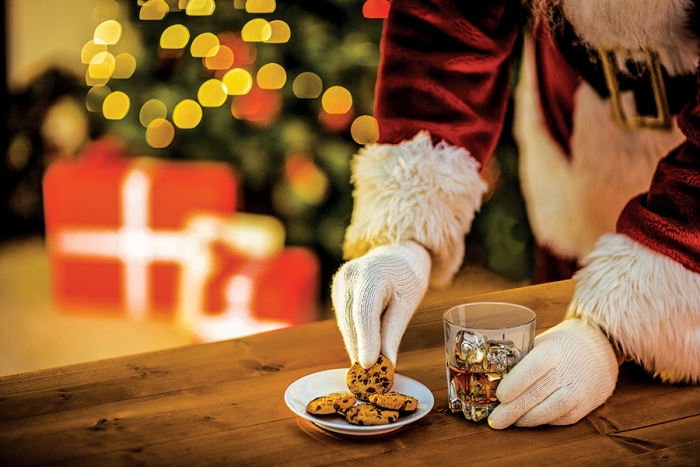 Credit: Shutterstock/C&EN
Midnight snack: Take one for the road, Nick.

Seen as by-products of peanut processing, peanut skins, or testae, generally become cheap animal feed or are incinerated. But recently, food scientists have found that they can be used to make fortified foodstuffs in the lab. Testae have high levels of phenolic compounds, a family of molecules that can trap free radicals in the body. By doing so, phenolic compounds stop cellular oxidation reactions, which can damage DNA and may lead to diseases such as cancer.

Radical-scavenging activity was seen to increase by up to 250% depending on the weight percent of testae added compared with nonfortified cookies. Peanut skins “are a pro-health material,” Shahidi says. “Sooner or later we’ll see them included in food” accompanied by proper allergenic information, he adds.

Best of all, the team’s consumer simulation showed no differences in odor, color, texture, or taste between their cookies and ones without peanut skins. Santa will like that.