Purveyors of ice cream report that vanilla is the most popular flavor among Americans. But real vanilla, made from the beans of the vanilla orchid, is scarce. Worldwide production of natural vanilla extract is only 40 to 50 metric tons per year; there is not nearly enough of it to go around.

The flavor and scent of vanilla is used in a variety of products. But 99% of the time the sensation comes from man-made versions of vanillin, a chemical that is the major flavor component of vanilla. That works out to a supply of about 20,000 metric tons per year.

Credit: Shutterstock
Most vanilla flavor in foods come from synthetic vanillin, but manufacturers are trying to find economical natural routes to the vanilla flavor.
CLOSE FIT
[+]Enlarge
A panel of trained sensory experts has mapped the differences between the taste of naturally derived vanillin and the taste of vanilla bean extract. 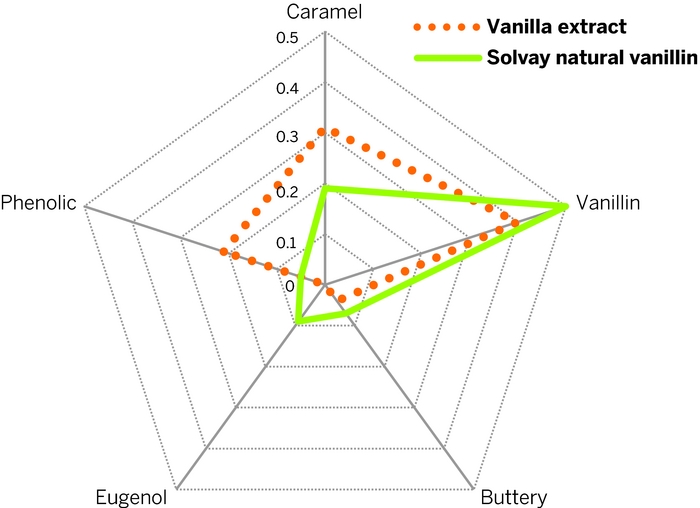 A panel of trained sensory experts has mapped the differences between the taste of naturally derived vanillin and the taste of vanilla bean extract.

The combination of limited natural vanilla supply and rising consumer interest in natural ingredients has spurred investment in natural versions of vanillin. The Belgian specialty chemical company Solvay, a leading producer of synthetic vanillin, makes natural vanillin from a by-product of rice bran oil refining. Swiss biotech firm Evolva begins with sugar. Both processes involve fermentation by yeast. For now, neither one has the scale to challenge synthetic vanillin production.

There are several routes to vanillin, which span a continuum of synthetic to natural. Starting materials include petrochemicals, lignin from the pulp and paper industry, and clove oil. “There is even a small market in vanillin that comes from the glands of beavers,” says Neil Goldsmith, chief executive office of Evolva. Products made with natural raw materials and processes command higher prices, he adds. When made from petrochemical sources, the ubiquitous flavoring costs as little as $10 per kg, whereas vanillin made in a way that can be labeled natural can cost hundreds of dollars per kg.

The vanilla orchid may have evolved to produce vanillin, which it stores as a glycoside, to protect itself from predatory microbes, Goldsmith says. The process of curing vanilla beans converts the glycoside to vanillin. Likewise, Evolva’s modified yeast strain makes a glycoside precursor of vanillin, which the company then converts to vanillin after removing the yeast. “You can’t produce a lot of vanillin directly in yeast, because it will kill the yeast,” Goldsmith says.

Tell us: Do you choose foods made without artificial colors, flavors, and preservatives? Visit http://cenm.ag/additives.

Solvay makes its natural vanillin by fermenting ferulic acid that is extracted from rice bran. The firm began scaling up the process in the early 2000s after a few bad years of vanilla bean production made vanilla prices skyrocket, recounts Corine Cochennec, manager of Solvay’s vanilla expert center. It remained a small business until 2009, when demand for natural ingredients shot up.

Cochennec says Solvay’s process uses a naturally occurring yeast rather than genetically modified yeast. “In Europe the question of GMO yeast and regulation is not that clear at the moment. Our customers are requesting non-GMO products,” she says.

Both Evolva and Solvay are working to scale up their natural vanillin production. Evolva is working with partner International Flavors & Fragrances to complete development and ready the product for commercialization. Solvay’s experts are looking for additional sources of ferulic acid. Late last year, the firm said it would double its capacity to make natural vanillin at its facility in Melle, France.

Food Ingredients
Newcomers head for zero-calorie sweetener market
Food Science
The problem with vanilla
Business
Cargill And Evolva Plan Stevia Facility
Share X
To send an e-mail to multiple recipients, separate e-mail addresses with a comma, semicolon, or both.
Title: Following Many Routes To Naturally Derived Vanillin
Author: Melody M. Bomgardner
Chemical & Engineering News will not share your email address with any other person or company.

Comments
T Webster (February 12, 2014 9:46 AM)
Mr. Goldsmith is mistaken. There is no vanillin on the market that is manufactured from beaver glands.
Reply »

Papaki Legodi (February 21, 2015 4:10 PM)
I have recently discovered a very cost effective way vanillin and ethyl vanillin could be made.The process envisaged will lead to minimal impact to the environment and high profit margins for the company using it.Decided not to protect it.Just not worth it.The process to make vanillin /ethyl vanillin goes like this.1,3 butadiene is reacted with acrolein in a molar ratio ranging from 1:5-1:30 to form the diels alder reaction product 3-cyclohexene carboxaldehyde (yield & selectivity>95%).The 3-cyclohexene carboxaldehyde is epoxidised with hydrogen peroxide/alkyl hydroperoxides over known catalysts such as TS-1 (Titanium Silicalite).The resulting epoxide is reacted with methanol in order to make vanillin and ethanol for ethyl vanillin.Methanol is in excess in the reaction preferably 1:5 mole ratio to the 3-cyclohexene carboxaldehyde.The resulting isolated product is then aromatized over known catalyst compositions such as Pt/Pd/Ni supported on alumina/silica/magnesium oxide.Byproduct isovanillin/isoethyl vanillin is easily separated out by crystallization to obtain pure vanillin/ethyl vanillin.Beauty of the process is that its simple.
Reply »

syed umais (September 16, 2015 2:45 AM)
Hi there, this is Syed I really want to know the detailed procedure of making synthetic vanillin please if you can mail what you have found or tried.

Cecilia E. LLuberes (July 27, 2016 3:23 PM)
I produce hot sauces, and used only natural preservatives such as salt, vinegar. I am in much need of a natural preservative that I can use with fresh fruits that wouldn't be sugar, because my products have no sugars added. This is most important to me (I am also a small business), is there any suggestions you can give me for these to extend their shelve life? The idea of the Rosemary Extract sounds beautiful to my ears, but is it good for fresh fruits? Please advise. I am in much need of this information
Reply »