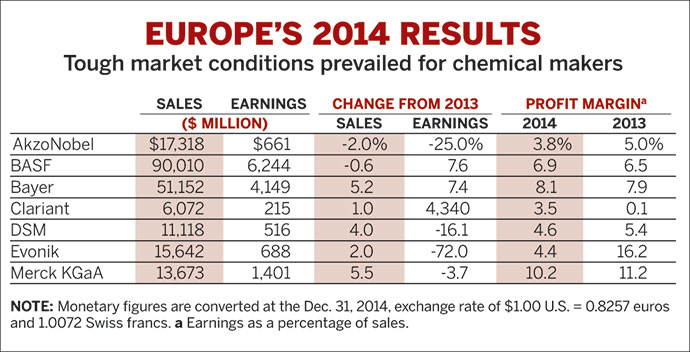 The major German chemical companies released their 2014 financial results in recent days, adding to reporting by other European chemical leaders during February. Together, the announcements paint a picture of sluggish market conditions, particularly for commodity chemicals. Common rhetoric among European company CEOs, though, is that they are laying the foundation for future growth.

Sales at BASF, the world’s largest chemical company, dipped 0.6% to $90 billion in 2014. It is the first time since 2009, during the depths of the global economic crisis, that sales at the company fell. BASF’s volumes in 2014 increased 4%, but prices dropped 3%. Chairman Kurt W. Bock asserted that “we have our costs firmly under control” and that the firm’s financial performance in the past year was “an outstanding achievement.”

Still, Bock offered no assurances when it comes to 2015. It “is subject to significant uncertainty,” he said. “Oil and raw material prices are volatile, as are currencies; the emerging markets are growing more slowly; and the global economy is being dampened by geopolitical conflict.” His outlook is based on a 2.8% increase in global economic growth; world chemical production, excluding pharmaceuticals, growing by 4.2%; and an average oil price of $60 to $70 per barrel.

According to CEFIC, Europe’s major chemical industry association, total chemical output in Europe grew by just 0.3% in 2014. This was “partly due to sagging exports,” CEFIC Director General Hubert Mandery said. “Lower oil prices have not solved a greater long-term problem,” he added. More positively, chemical order books have improved for the coming months, and production expectations have firmed up, CEFIC said.

Compared with BASF, Bayer had more robust 2014 financial performance, with its HealthCare, CropScience, and MaterialScience groups all contributing to sales and profit growth. Sales for the MaterialScience business of high-tech polymers increased 3.7%, owing to higher production volumes in the face of declining sales prices. Although the polymer business turned a profit in 2014, Bayer Chairman Marijn Dekkers has given up on it. He reiterated plans to float it on the stock market as a separate company by mid-2016. Bayer is targeting sales growth and a significant rise in profit in 2015.

Midsized firms such as AkzoNobel, DSM, and Evonik Industries struggled in 2014 and posted earnings declines. In contrast, 2014 was a year when profits bounced back for the Swiss chemical maker Clariant. The firm’s hike in earnings to $215 million, up from less than $10 million in 2013, is the result of a shift into high-margin markets, CEO Hariolf Kottmann said. He predicts continued sales growth in 2015 “despite an increasingly volatile economic environment.”

Economy
European firms tough it out in the third quarter
Finance
Cracks show in third-quarter earnings
Economy
Chemical industry stumbles out of the gate
Share X
To send an e-mail to multiple recipients, separate e-mail addresses with a comma, semicolon, or both.
Title: European Chemical Firms Struggle To Secure Growth
Author: Alex Scott
Chemical & Engineering News will not share your email address with any other person or company.