Seeking A Home For PaperMaking Waste

BACK TO BLACK
[+]Enlarge
Credit: Chemrec
Pulp and paper producers in Northern Europe are striving to generate income by repurposing their black liquor by-product into industrial chemicals. 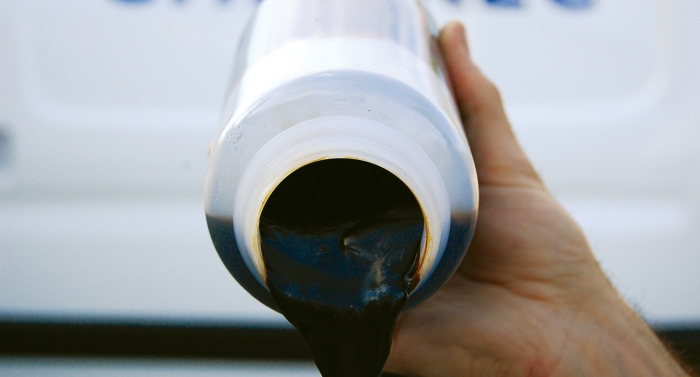 Credit: Chemrec
Pulp and paper producers in Northern Europe are striving to generate income by repurposing their black liquor by-product into industrial chemicals.

First they poured it into rivers. Then they learned to burn it to power their mills. Now, paper producers in the forested regions of Northern Europe are looking closely at converting black liquor, a by-product of papermaking, into industrial chemicals.

As dark and as thick as molasses, black liquor is rich in lignin—the organic polymer that gives trees their rigidity—as well as cellulose, hemicellulose, alcohols, and inorganic components. The liquor is generated from the paper industry’s kraft process, in which a mixture of sodium hydroxide and sodium sulfide breaks the bonds linking lignin to cellulosic fibers, the primary component of paper.

The sector’s desire to make chemicals from black liquor is being driven by its search for product diversification in the face of a slow demand decline in recent years as phones and tablets replace magazines and newspapers. Paper producers also know that a green energy subsidy for burning black liquor that they earn from the European Union won’t last forever.

Paper companies already skim valuable soaps from their black liquor. But converting other major liquor components, such as lignin, into industrial chemicals has so far proved elusive. Given that industrial chemicals from the liquor may have to compete against those derived from fossil fuels, the current low oil price could make market entry particularly challenging. But European paper firms have economies of scale on their side because they collectively generate tens of millions of tons of the liquor annually. They are optimistic that if they can develop the right chemistries, they could unlock big new revenue streams.

“What I clearly know is that the pulp and paper producers need to do something soon or they will have a problem,” says Alex Michine, chief executive officer of Metgen, an enzyme technology firm based in Kaarina, Finland.

Hemicellulose and cellulose contained within the black liquor are obvious targets for processing into useful chemicals, Michine says. With the help of enzyme-based processes, they can be degraded into sugars, which in turn can be fermented by yeast or bacteria into ethanol, other alcohols, and organic chemicals. 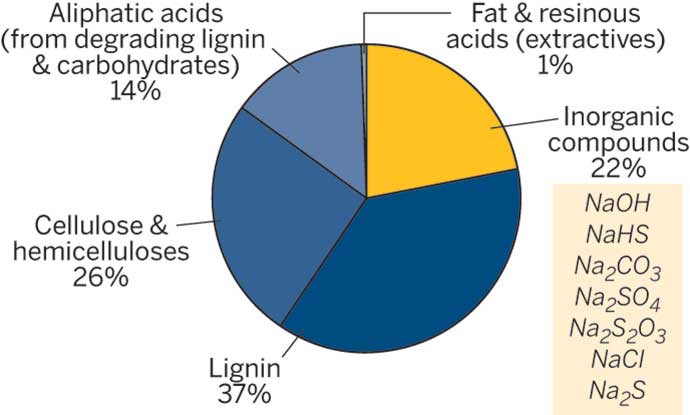 Key components of black liquor could be converted into industrial chemicals. Despite being abundant in black liquor, lignin has proven difficult to exploit toward this goal. NOTE: Composition shown for birch black liquor. Composition can vary according to species and location. SOURCE: www.knowpulp.com

Paper companies are moving ahead, but cautiously. “They need technology skills, an enzyme technology company, chemical processing knowledge, and the business insight,” Michine points out.

Entering chemical markets will indeed be challenging, acknowledges Åke Westberg, president of the energy business of Svenska Cellulosa Aktiebolaget (SCA), a paper firm based in Stockholm. “There are many chemical and biofuel producers in Europe, so regardless of the product, we will face competition.”

SCA is evaluating several approaches for making high-value chemical products, Westberg says. The firm has the equivalent of up to 10 full-time R&D staffers working on projects for developing these biochemical processes.

Investment in new chemical projects “has grown quickly over the past couple of years,” Westberg says. “We will soon be in a phase to scale up the technology.” But the firm isn’t about to become a major chemical producer overnight. “We will move into new markets step by step,” he says.

Other pulp and paper producers are seeking to use tall oil—a mixture of mostly fat and resinous acids—skimmed from black liquor to produce diesel. In January, Finnish pulp and paper producer UPM started up a 100,000-metric-ton-per-year tall-oil-to-biodiesel plant, the first such facility in the world, at its Lappeenranta, Finland, mill.

But at a cost of more than $200 million, it did not come cheap. Developed by UPM along with partners Andritz Carbona and the Danish catalyst technology firm Haldor Topsoe, the plant features a four-step process: pretreatment of the oil, hydrotreatment, recycled gas purification, and fractionation.

Meanwhile, UPM tells C&EN that it is now at the precommercial phase for producing undisclosed chemicals from black liquor itself. “There is still a lot of R&D to be done,” the firm says.

Finnish paper producer Stora Enso, which has annual sales of about $15 billion, also has its eye on extracting chemicals from the millions of tons of black liquor it generates annually. The firm is due to open a biomaterials innovation center in Sweden by the end of June. It will employ up to 60 people, rising to around 75 by year’s end.

Stora Enso’s researchers already are busy developing a technology for separating hemicellulose from black liquor to make sugars. The firm is building a demonstration plant to generate sugar streams and convert them into value-added chemicals. “The main challenges are in the separation and purification technologies,” it says. The demonstration plant will be in Louisiana—an indication that it is not just paper mills in Northern Europe that stand to benefit from shifting into chemical production.

Lignin, a complex polymer of aromatic alcohols named monolignols, is the largest constituent of black liquor, but it is insoluble and not readily depolymerized. Potentially it could be converted into aromatic chemicals. But CSA’s Westberg points to a saying among Scandinavian paper firms: “You can make anything from lignin, except money.”

Stora Enso for one has no plans to convert lignin into any major chemicals because “the cost of conversion means these products could not effectively compete with fossil-based aromatic materials,” the firm says.

Across the border from Sweden, Norwegian mills have an easier time converting lignin into chemicals because they use a pulp pretreatment step known as the sulfite process. In this process, lignin is extracted from the cellulose fibers by exposing the wood pulp to bisulfite salts. The approach generates a red or brown liquor that contains lignosulfonates, which are water soluble and can be more readily converted into chemicals.

Norwegian specialty chemical firm Borregaard leads the way when it comes to converting lignosulfonates into industrial chemicals. The firm produces 600 distinct chemicals, including the flavoring ingredient vanillin, in Sarpsborg, Norway, where it has “the most advanced biorefinery in the world,” says Gisle L. Johansen, Borregaard’s head of R&D.

Among its activities, Borregaard ferments sugars from woody materials to make ethanol. To add further value to these sugars, the firm is now working with the English biotech Green Biologics to develop fermentation processes for industrial chemicals using genetically engineered strains of the Clostridium microbe. The two companies have secured a grant to develop a process for converting wood-derived sugars into 1-butanol that they hope will be commercial in the next few years.

“It’s promising, but it is not straightforward to produce the sugars at low cost and outcompete oil-based processes,” Johansen says. “We need to find some niche markets for the ‘green’ chemicals.”

Fully depolymerizing lignin from black liquor into useful chemicals at a low cost is perceived as a challenge for the longer term by Per Tomani, team leader for lignin and carbon fiber research at ­Innventia, a Stockholm-based technology developer. For this reason, much of the work of Tomani and his team of about 20 researchers is focused on developing processes that partially depolymerize lignin.

An alternative is to convert lignin into synthesis gas, a mixture of carbon monoxide and hydrogen known as syngas. Chemrec, a technology firm based in Stockholm, has developed such a technology.

Black liquor has a high alkaline content that makes it more reactive than oil and coal, according toChemrec. “This means that the gasification reaction is efficient and provides a cleaner syngas than other biomass gasification technologies,” claims Ingvar Landälv, senior project manager of energy sciences at Sweden’s Luleå University of Technology. Landälv was chief technology officer for Chemrec from 2001 until 2012.

In Chemrec’s syngas process, products that could be generated include urea, gasoline, acetic acid, dimethyl ether, and formaldehyde. Since 2012, Chemrec has been testing the process in a demonstration facility adjacent to Smurfit Kappa Kraftliner’s paper mill in Piteå, Sweden, where it has been producing 4 tons per day of dimethyl ether. The facility consumes about 1% of the paper mill’s black liquor. Sweden has about 20 paper mills that could deploy such a process.

A downside associated with the syngas technique is its high capital cost. A more recent challenge for the approach is the low price of oil. Chemrec’s plants have to be relatively large to enjoy economies of scale and cannot compete with fossil fuel at a price of less than $100 per barrel, Landälv acknowledges.

Given that analysts are predicting an oil price of less than $70 per bbl for the rest of this year, paper mill owners won’t be in a rush to build syngas plants. Indeed, any move by the paper industry into chemicals will likely happen slowly. It will be some time yet before much of Northern Europe’s black liquor is diverted away from the paper mill furnace.

Process Chemistry
A greener path toward vanillin from paper pulp
Green Chemistry
Biorefinery turns birch wood into renewable chemicals
Biobased Chemicals
Paper firm UPM will spend $600 million to make chemicals from wood
Share X
To send an e-mail to multiple recipients, separate e-mail addresses with a comma, semicolon, or both.
Title: Seeking A Home For PaperMaking Waste
Author: Alex Scott
Chemical & Engineering News will not share your email address with any other person or company.