The immune system may protect our bodies, but it isn’t immune to chemical manipulation. In fact, in recent publications and in presentations at last month’s American Chemical Society national meeting in Denver, chemists reported new chemical ways to prod and probe the human immune system.

Much of this work has focused on a family of immune system transcription factors collectively called nuclear factor-κB (NF-κB). Receptors in the immune system, such as toll-like receptors, generate signals that tell NF-κB to turn genes on or off in cell nuclei, leading to increases or decreases in expression of cytokines and to corresponding changes in immune responses.

Cytokines can trigger inflammation, an attack by blood-borne immune cells on pathogens or tissue sites. NF-κB-induced cytokine releases can also drive immune responses to leukemia and other cancers and can worsen chronic inflammation in conditions such as asthma, inflammatory bowel disease, and rheumatoid arthritis.

Increasingly, the 10 human toll-like receptors that control the NF-κB pathway “have become realistic targets for drug developers,” according to chemical biologist Hang Hubert Yin of the University of Colorado (CU), Boulder. “For a wide spectrum of inflammatory disorders and autoimmune diseases, pharmaceutical and biotech companies are developing promising drug candidates that fight disease by targeting them.”

The new work continues this trend of searching for novel chemical agents—including small molecules and nucleic acids—that can manipulate the NF-κB pathway. Researchers also hope to use such agents to help them probe the pathway’s mechanistic details.

In a therapeutic example of such work, Yin and coworkers at CU Boulder and Tsinghua University, in Beijing, reported in a Division of Medicinal Chemistry session at the ACS meeting and in Science Advances (2015, DOI: 10.1126/sciadv.1400139) that they are developing small-molecule agonists of toll-like receptors that could help attack cancer. They identified a small molecule called CU-T12-9 that binds to toll-like receptors 1 and 2, causing the receptors to bind to one another (dimerize). Dimerization activates NF-κB signaling, which tells the cell to increase production of two types of cytokines, tumor necrosis factor and interleukins, boosting the body’s immune responses.

Yin believes CU-­T12-9’s ability to enhance immunity could give it potential as a vaccine adjuvant and as a treatment for diseases such as cancer. CU Boulder filed a patent application for the compound and other toll-like receptor agents developed by the Yin group, and the university licensed this intellectual property to various companies for the development of drugs and biomedical research tools.

Aaron P. Esser-Kahn of the University of California, Irvine, and coworkers are also developing toll-like receptor agonists, but in their work they’ve produced photocaged versions. These molecules have chemical groups that can be removed using ultraviolet light to reveal the active agents, allowing the researchers to control the timing of the agents’ effects. They call these TRIGIR (tagged and remotely induced guided immune response) probes. They discussed the work in Division of Polymer Chemistry presentations at the ACS meeting and in a recent paper (Angew. Chem. Int. Ed. 2015, DOI: 10.1002/anie.201500416).

Credit: Adapted from Tetrahedron Lett.
Photocaged CpG oligonucleotides bind toll-like receptor 9 after they are photoactivated, but not before.

Spheroids
[+]Enlarge
Credit: Courtesy of Chad Mirkin
SNAs such as this one can be designed to regulate the immune system. 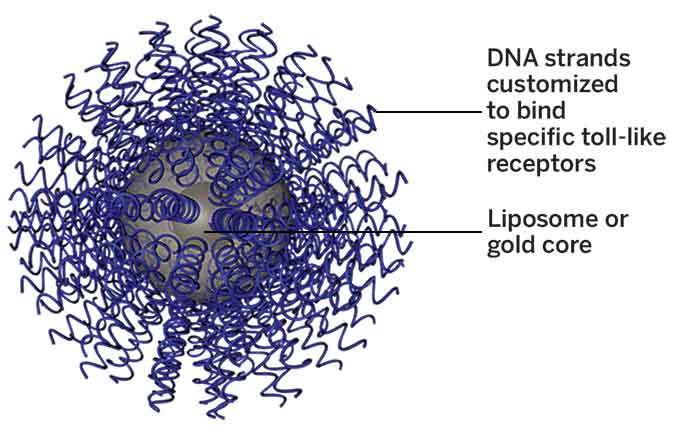 Credit: Courtesy of Chad Mirkin
SNAs such as this one can be designed to regulate the immune system.

Alexander Deiters of the University of Pittsburgh and coworkers also have developed photocaged agonists of toll-like receptors. They work with CpGs, a family of short synthetic single strands of nucleic acids known to activate toll-like receptor 9 (Tetrahedron Lett. 2015, DOI: 10.1016/j.tetlet.2015.01.165). Photocaged CpGs may have therapeutic potential in a variety of diseases, including HIV, hepatitis B, and cancer, Deiters said.

Another team has created nucleic acid-based agents to manipulate toll-like receptors to activate or suppress immunity. Chad Mirkin of Northwestern University; Sergei Gryaznov of Aura­Sense Therapeutics, in Skokie, Ill.; and coworkers have used liposomal and gold nanoparticles as spherical templates to organize and orient nucleic acids on their surfaces, creating spherical nucleic acids (SNAs). They discussed the work in a Division of Medicinal Chemistry talk and a paper (Proc. Natl. Acad. Sci. USA 2015, DOI: 10.1073/pnas.1502850112).

SNA activators could help launch immune attacks against influenza viruses or cancer cells, and SNA suppressors could treat autoimmune conditions such as rheumatoid arthritis and psoriasis. The researchers note that SNAs are nontoxic; enter cells via endosomes, cell organelles where toll-like receptors are located; and present DNA strands in an optimal orientation that maximizes their potency.

For example, in mice with lymphoma, SNAs decreased tumor growth and increased life span with a potency 80 times that of free nucleic acids with the same sequence. SNA immune agents are being developed by Northwestern and AuraSense, a company Mirkin founded. 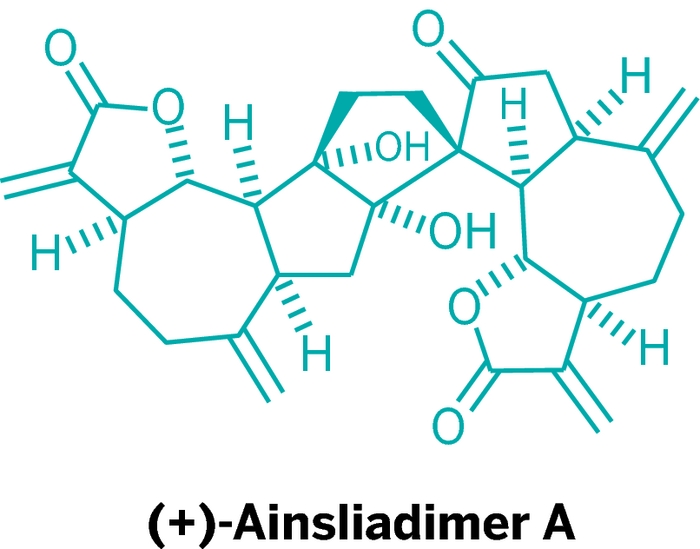 This natural product blocks the NF-κB pathway by inhibiting the kinase complex IKKα/β.

A research team in China is taking a somewhat more direct route to immune regulation by skipping toll-like receptors. Chemical biologist Xiaoguang Lei of Peking University and coworkers study a small molecule that targets IKKα/β, a kinase complex that activates the NF-κB pathway. They have now achieved the first enantioselective total synthesis of the natural product ainsliadimer A. They then evaluated it for anti-inflammatory activity and found that the natural product inhibits IKKα/β selectively, and thus inhibits the NF-κB pathway as well, by binding to a spot remote from the kinase complex’s active site (Nat. Commun. 2015, DOI: 10.1038/ncomms7522).

A number of drug companies have evaluated IKKα/β as a target for treatment of inflammatory diseases and cancers, but highly selective inhibitors have been rare, Lei told C&EN. “Several pharmaceutical companies have shown interest in collaborating to further develop natural-product-derived drug candidates based on ainsliadimer A,” Lei added.

The use of chemistry to interact with toll-like receptors and the NF-κB pathway does seem to be on a roll. “Indeed, this is one of the most exciting, promising, and rapidly growing areas in therapeutics development,” Mirkin said.